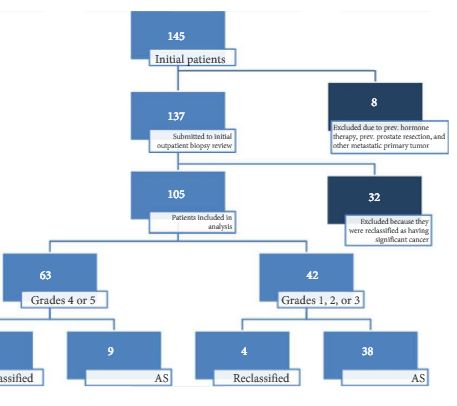 To evaluate the role of multiparametric magnetic resonance imaging (mpMRI) of the prostate and transrectal ultrasonography guided biopsy (TRUS-Bx) with visual estimation in early risk stratification of patients with prostate cancer on active surveillance (AS).

Patients with low-risk, low-grade, localised prostate cancer were prospectively enrolled and submitted to a 3-T 16-channel cardiac surface coil mpMRI of the prostate and confirmatory biopsy (CBx), which included a standard biopsy (SBx) and visual estimation-guided TRUS-Bx. Cancer-suspicious regions were defined using Prostate Imaging Reporting and Data System (PI-RADS) scores. Reclassification occurred if CBx confirmed the presence of a Gleason score ≥7, greater than three positive fragments, or ≥50% involvement of any core. The performance of mpMRI for the prediction of CBx results was assessed. Univariate and multivariate logistic regressions were performed to study relationships between age, prostate-specific antigen (PSA) level, PSA density (PSAD), number of positive cores in the initial biopsy, and mpMRI grade on CBx reclassification. Our report is consistent with the Standards of Reporting for MRI-targeted Biopsy Studies (START) guidelines.

In all, 105 patients were available for analysis in the study. From this cohort, 42 (40%) had PI-RADS 1, 2, or 3 lesions and 63 (60%) had only grade 4 or 5 lesions. Overall, 87 patients underwent visual estimation TRUS-Bx. Reclassification among patients with PI-RADS 1, 2, 3, 4, and 5 was 0%, 23.1%, 9.1%, 74.5%, and 100%, respectively. Overall, mpMRI sensitivity, specificity, positive predictive value, and negative predictive value for disease reclassification were 92.5%, 76%, 81%, and 90.5%, respectively. In the multivariate analysis, only PSAD and mpMRI remained significant for reclassification (P < 0.05). In the cross-tabulation, SBx would have missed 15 significant cases detected by targeted biopsy, but SBx did detect five cases of significant cancer not detected by targeted biopsy alone.

Multiparametric magnetic resonance imaging is a significant tool for predicting cancer severity reclassification on CBx among AS candidates. The reclassification rate on CBx is particularly high in the group of patients who have PI-RADS grades 4 or 5 lesions. Despite the usefulness of visual-guided biopsy, it still remains highly recommended to retrieve standard fragments during CBx in order to avoid missing significant tumours.

Read more articles of the week
Editorial: An end to the phenomenon of ‘upgrading’ in early prostate ca...