To investigate the possibility of detecting sentinel lymph nodes (SNs) in patients with urinary bladder cancer (BCa) intra-operatively and whether the histopathological status of the identified SNs reflected that of the lymphatic field.

We studied 103 patients with BCa pathological stage T1–T4 who were treated with cystectomy and pelvic lymph node (LN) dissection during 2005–2011 at the Department of Urology, Linköping University Hospital. Radioactive tracer Nanocoll 70 MBq and blue dye were injected into the bladder wall around the primary tumour before surgery. SNs were detected ex vivo during the operation with a handheld Geiger probe (Gamma Detection System; Neoprobe Corp., Dublin, OH, USA). All LNs were formalin-fixed, sectioned three times, mounted on slides and stained with haematoxylin and eosin. An experienced uropathologist evaluated the slides. 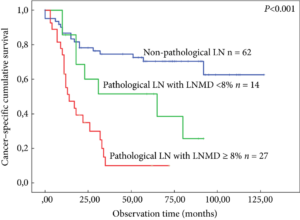 We conclude that SNB is not a reliable technique for peri-operative localization of LN metastases during cystectomy for BCa; however, LNMD has a significant prognostic value in BCa and may be useful in the clinical context and in BCa oncological and surgical research. LVI was also found to be a prognostic factor.

Chipping away at the body politic one study at a time: the case for more ‘unprofessional’...
Scroll to top