Men with locally advanced or metastatic prostate cancer participating in an ongoing randomised, multicentre UK trial comparing tE2 versus LHRHa for ADT were enrolled into a QoL sub-study. tE2 was delivered via three or four transcutaneous patches containing oestradiol 100 μg/24 h. LHRHa was administered as per local practice. Patients completed questionnaires based on the European Organisation for Research and Treatment of Cancer quality of life questionnaire 30-item core (EORTC QLQ-C30) with prostate-specific module QLQ PR25. The primary outcome measure was global QoL score at 6 months, compared between randomised arms. 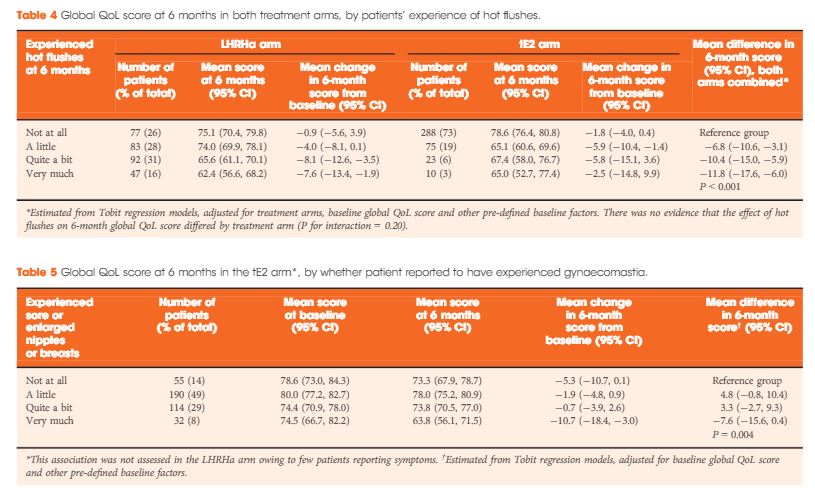 In all, 727 men were enrolled between August 2007 and October 2015 (412 tE2, 315 LHRHa) with QoL questionnaires completed at both baseline and 6 months. Baseline clinical characteristics were similar between arms: median (interquartile range) age of 74 (68–79) years and PSA level of 44 (19–119) ng/mL, and 40% (294/727) had metastatic disease. At 6 months, patients on tE2 reported higher global QoL than those on LHRHa (mean difference +4.2, 95% confidence interval 1.2–7.1; P = 0.006), less fatigue, and improved physical function. Men in the tE2 arm were less likely to experience hot flushes (8% vs 46%), and report a lack of sexual interest (59% vs 74%) and sexual activity, but had higher rates of significant gynaecomastia (37% vs 5%). The higher incidence of hot flushes among LHRHa patients appear to account for both the reduced global QoL and increased fatigue in the LHRHa arm compared to the tE2 arm.

Patients receiving tE2 for ADT had better 6-month self-reported QoL outcomes compared to those on LHRHa, but increased likelihood of gynaecomastia. The ongoing trial will evaluate clinical efficacy and longer term QoL. These findings are also potentially relevant for short-term neoadjuvant ADT.