Article of the Week: Sentinel node biopsy for prostate cancer: report from a consensus panel meeting

To explore the evidence and knowledge gaps in sentinel node biopsy (SNB) in prostate cancer through a consensus panel of experts.

A two-round Delphi survey among experts was followed by a consensus panel meeting of 16 experts in February 2016. Agreement voting was performed using the research and development project/University of California, Los Angeles Appropriateness Methodology on 150 statements in nine domains. The disagreement index based on the interpercentile range, adjusted for symmetry score, was used to assess consensus and non-consensus among panel members. 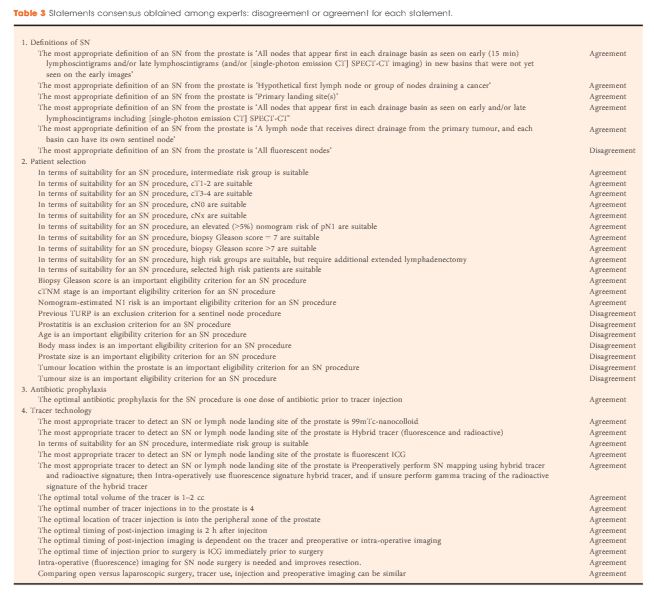 Consensus was obtained on 91 of 150 statements (61%). The main outcomes were: (1) the results from an extended lymph node dissection (eLND) are still considered the ‘gold standard’, and sentinel node (SN) detection should be combined with eLND, at least in patients with intermediate- and high-risk prostate cancer; (2) the role of SN detection in low-risk prostate cancer is unclear; and (3) future studies should contain oncological endpoints as number of positive nodes outside the eLND template, false-negative and false-positive SN procedures, and recurrence-free survival. A high rate of consensus was obtained regarding outcome measures of future clinical trials on SNB (89%). Consensus on tracer technology was only obtained in 47% of statements, reflecting a need for further research and standardization in this area. The low-level evidence in the available literature and the composition of mainly SNB users in the panel constitute the major limitations of the study.

Consensus on a majority of elementary statements on SN detection in prostate cancer was obtained.; therefore, the results from this consensus report will provide a basis for the design of further studies in the field. A group of experts identified evidence and knowledge gaps on SN detection in prostate cancer and its application in daily practice. Information from the consensus statements can be used to direct further studies.