Blog - Latest News
You are here: Home1 / Article of the Week2 / Editorial: Sergeant, do you copy?

In the Institute of Medicine report published in 1999, it was estimated that 44 000–98 000 patients died annually from preventable medical errors. It was further reported that the annual burden on economy due to preventable medical errors was anywhere between 17–29 billion American dollars. In the USA federal budget 2000–2001, the entire federal resources devoted to general science, space and technology was 19.2 billion American dollars: ≈10 billion less than the cost of medical errors (Fig. 1). 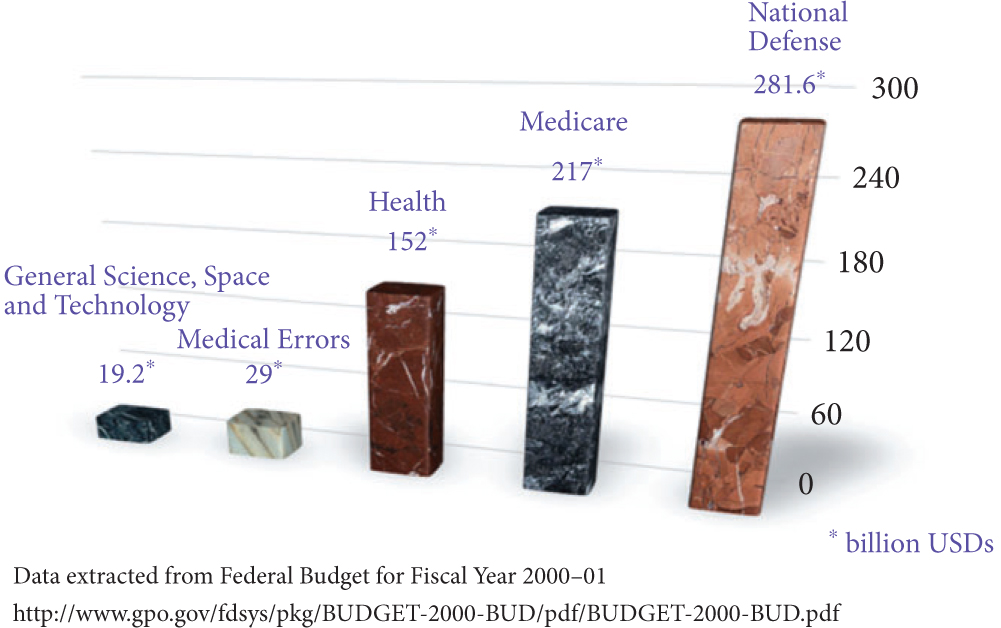 On root cause analysis of the errors identified in the Joint Commission on Accreditation and Certification database (2011), it was reported that most of these errors are non-technical, i.e. human factors (72%), leadership (65%), communication breakdown (61%), etc. Furthermore, Greenberg et al. studied the patterns of communication breakdown on the Malpractice Insurers’ Medical Error Prevention Study (MIMEPS) database and concluded that breakdown patterns were similar preoperatively (38%), intraoperatively (30%) and postoperatively (32%). Most errors were due to miscommunication within a single department (78%), as compared with across departments (19%) or institutions (3%). In 49% of the cases, the information was never relayed and in 44% the information relayed was not comprehended appropriately. In all, 29% of these errors involved a surgery attending at transmitting end and 56% at the receiving end of information. In all, 85% of these communications were verbal.

In this issue of BJUI, Ahmed et al. have used the Healthcare Failure Mode and Effect Analysis (HFMEA) model to design a safety checklist specifically for robotic procedures. Checklists have been heavily used in high-risk environments that involve complex technology, e.g. aerospace and nuclear engineering. Robotic surgery is another such high-risk environment, where intraoperative communication is critical. When a surgeon performs a robotic surgery, (s)he is not standing next to the patient (and occasionally not even in the same room!) and relies heavily on his/her assistant. Additionally, the bulky robot takes most of the space around the patient. Small movements of the instruments can cause abrupt and exaggerated movements of the robotic arms, which might injure the bedside assistant, anaesthesiologist, or the patient himself. Last, but not the least, there is a memory clutch on the robotic arms, and its purpose is to ‘remember’ the position of the arms while exchanging the instruments. However, if this clutch is pressed by mistake, all memory is lost and careless insertion of an instrument at this time, making an assumption of memory, can be dangerous and can cause serious injury. The safety checklist described by Ahmed et al. is one of the first checklists specific to robotic surgery. In parallel to this, the Fundamentals of Robotic Surgery (FRS) inter-disciplinary consortium led by Dr Richard Satava has also developed a checklist, specifically for robotic surgery. It will be interesting to study the actual impact of these checklists on prevention of medical errors in robotic surgery. Similar checklists have been validated showing significant clinical correlation using in situ simulation for obstetric emergencies.

Console Surgeon: ‘Please replace the scissors in the right arm with the needle driver’.

Assistant: ‘OK, I am replacing the scissors in your right arm with a needle driver’.

You are Not Connected to the Internet: Seeking Stable WiFi at the Modern Co...

Article of the week: Surgical safety checklist for robotic surgery
Scroll to top