Finally, the third post under the Article of the Week heading on the homepage will consist of additional material or media. This week we feature a video from Craig Rogers, discussing his paper.

To evaluate the outcomes of robot-assisted partial nephrectomy RAPN after major prior abdominal surgery (PAS) using a large multicentre database.

We identified 1 686 RAPN from five academic centres between 2006 and 2014. In all, 216 patients had previously undergone major PAS, defined as having an open upper midline/ipsilateral incision. Perioperative outcomes were compared with those 1 470 patients who had had no major PAS. The chi-squared test and Mann–Whitney U-test were used for categorical and continuous variables, respectively. 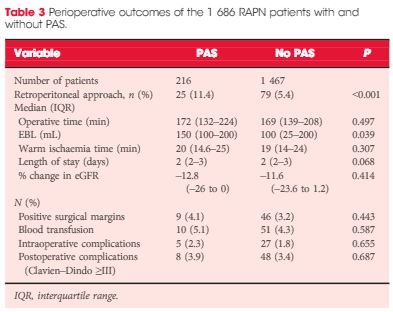 There was no statistically significant difference in Charlson comorbidity index, tumour size, R.E.N.A.L. nephrometry score or preoperative estimated glomerular filtration rate (eGFR) between the groups. Age and body mass index were higher in patients with PAS. The PAS group had a higher estimated blood loss (EBL) but this did not lead to a higher transfusion rate. A retroperitoneal approach was used more often in patients with major PAS (11.2 vs 5.4%), although this group did not have a higher percentage of posterior tumours (38.8 vs 43.3%, P = 0.286). Operative time, warm ischaemia time, length of stay, positive surgical margin, percentage change in eGFR, and perioperative complications were not significantly different between the groups.