The American Urological Association meetings always offer a plethora of stimulating sessions. Forget about the flowers in your hair, if you were going to San Francisco for the 2018 AUA meeting, an early morning coffee and good walking shoes were your best shot at getting to as much of the action as possible.  As best that I tried, I could not make it to all of the places that I wanted to be, so apologies must be made in advance if I fail to mention some of the great work that is being done in our field.

After registration and carefully dissecting the daily content in the phone book sized program, the day kicked off as early as 7am. Poster and video presentations touted new technologies and put forward ideas that met critical peer review and applause in several concurrent sessions. Also flourishing in number was the amount of instructional courses that were offered to attendees. From nocturia management to business models in medicine, the AUA courses added some active involvement to the osmotic learning process.

So often the term “defensive medicine” is used in describing practice that protects a practitioner from punitive or litigious claims. As uncomfortable an idea as this is, the AUA stage show titled “Court is in Session” was a great portrayal of the risk management process that occurs in clinical decision making for all of our patients. The brutal cross examination of on stage “witnesses” delivered by close colleagues (given away by a wry smile or two) had a few people shuffling in their seats and pulling at their collars. All in all, this was a great example of the use of best current evidence base for common choices made in urological care. Interestingly, when debating the case of a post-TRUS biopsy sepsis patient, transperineal biopsy did not even score a mention from the prosecution! 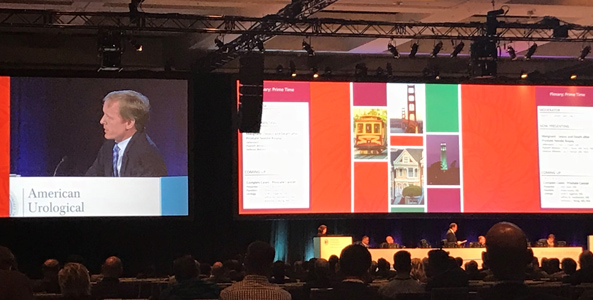 A complex case discussion of Prostate cancer was to follow with John Davis doing an excellent job at moderating and driving the discussion. A common theme in the court cases and case studies was the increasing relevance of pre-biopsy multiparametric MRI, with an argument being made by many that it is the evolving standard of care to image before biopsy.

Several studies looking at PSA density to inform biopsy for men with PIRADS<=3. Overall it appears phi has better performance to rule out biopsy in the negative MRI population (>97% NPV At @brady_urology ) #aua18 #pcsm pic.twitter.com/jYz9KwINVY

Treating ureteric stone promptly with infected obstructed kidney within same admission – not U.K. approach but this data supports it as a viable option #AUA18 pic.twitter.com/b1zrXqIVsv

To break up the day, a stroll around the science and trades hall is always welcome. The new devices and systems on offer surely raised some questions and some eyebrows! Some of the virtual reality simulators gave a great feeling for being actually present in the OT as seen in the picture below of me performing a prone PCNL puncture with my arm over the shoulder of my virtual consultant. 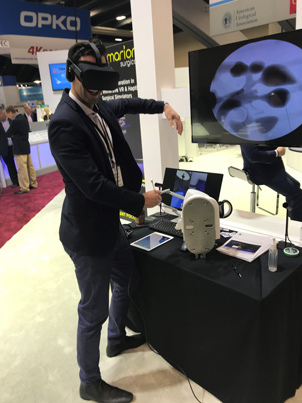 An interesting presentation was to follow called “The survivor debate” in which a case was made for different treatment options in a male patient with low- intermediate risk prostate cancer. The showdown of cases presented by Klotz’ 13 – each a passionate experts in the field – revealed some convincing arguments for therapies that I would not have previously considered. If anything, it was a lovely chance for the salesmanship of senior clinicians to come out! 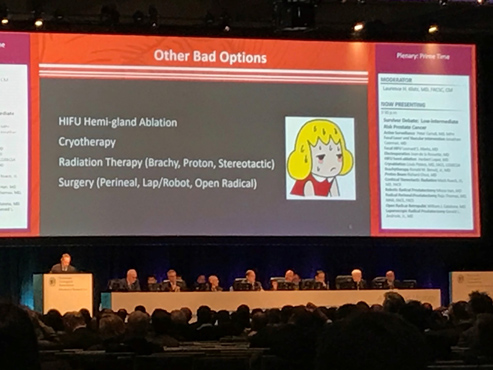 Great talk from Dr. Thomas Chi, all pcnl procedure only with US, prone or supine. No Xray #AUA18 pic.twitter.com/XlDza1DrVf

AUA President Brantley Thrasher delivered an address with some future insight. The issue of clinician burnout was addressed, being particularly high in the US. This was tied in with the rise of artificial intelligence, technology in medicine and the need for future proofing of the electronic medical record and data systems to help us better care for patients and ourselves. A slide and brief description on each new technology had my head swimming after learning about Bluetooth urinalysis chips to put in patient’s underwear to beam UTI info straight to your smartphone and electromagnetically driven “sperm-bots” that delivered a genetic payload to an ova.

Just when I thought I couldn’t be more impressed, a presentation from Dr. Atul Butte blew the lid off the plenary. In an engaging oration, he described the access that already exists to large data sets such as genomic and tissue samples and how easily these kinds of sets can be used to create innovative solutions to current healthcare dilemmas. To cap it off, a very effective visual “patient illness moving-map” was displayed showing data from tens of thousands of patients who had suffered myocardial infarction. By finding the end point of these patient journeys (most likely to die of sepsis years down the track) this can lead to the creation of a truly accountable model for healthcare outcome prediction and improved patient care. Definitely a lecture to re-visit if you get the chance! 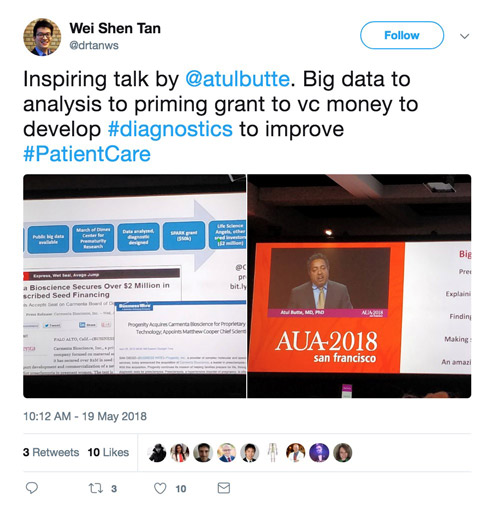 After the lecture on clinician burnout, I thought it best to heed the advice regarding taking some time out for you. Luckily, only a 10min walk from the convention center, you could find yourself amidst the Seal Docks and waterside. If you were lucky enough to jump in to the baseball game at AT&T Park, you may have enjoyed some ballpark American classics (hotdogs, nuts and crackerjacks) as well as a sea of black and orange clad SF Giants fans cheering their home team to victory.

Other stress relief events throughout the conference were a great chance for peers to mix and mingle, old alumni to catch up and for new relationships to be forged. The Urological Society of Australia and New Zealand’s annual AUA reception is a great event on the calendar that performed this role perfectly. With attendees encouraged to bring international guests, it was as multi-national as Australia’s home population.

It seems that an overarching theme for our future directions is one of large-scale change. The sheer size of the AUA 2018 meeting was enough to out that idea into our heads initially, but considering the global impact of the growing population and the limitation to our resourcing, we will need to start to consider some changes to future proof our systems of care. A quote that stuck with me that I had caught along the conference: Progress is impossible without change, and those who cannot their minds, cannot change anything. This meeting definitely changed presented enough to change my mind about quite a few things!

For my first AUA it was a fantastic experience! It is always a great chance to catch up with peers and mentors and also to meet international experts in the field to gain exposure to their work. Looking forward to Chicago! #AUA19

Article of the Week: Focal irreversible electroporation as primary treatment...