Over the past couple of years, we have seen a growing number of fun and exciting ways to help raise awareness for prostate cancer and men’s health. Movember, for example, has become increasingly popular across the globe. This summer, a couple of high-octane, awareness and fund-raising events are taking place on both sides of the Atlantic. I encourage you to check out both of these events and consider participating – jump in and fasten your seat belts, we’re going for a ride!

The Drive for Men’s Health

This year, on Thursday, June 11th, the Drive for Men’s Health will again start in Clermont, Florida. However, once they arrive in Manhattan, they’ll take a sharp left turn and head West to Los Angeles, California. The 6,000 mile journey is expected to take nine days to complete. Along the way, the team will need to stop over 60 times to plug in and recharge.

Putting a Plug In for Men’s Health

Over the course of the drive, the urology duo will host live webcasts, on a variety of men’s health topics, with over 200 speakers from around the world. The drivers hope the car, and technology used during the drive, will function as a magnet to pull men and their loved ones into further discussions about healthy living. This year’s Drive for Men’s Health coincides with National Men’s Health Week in the United States. 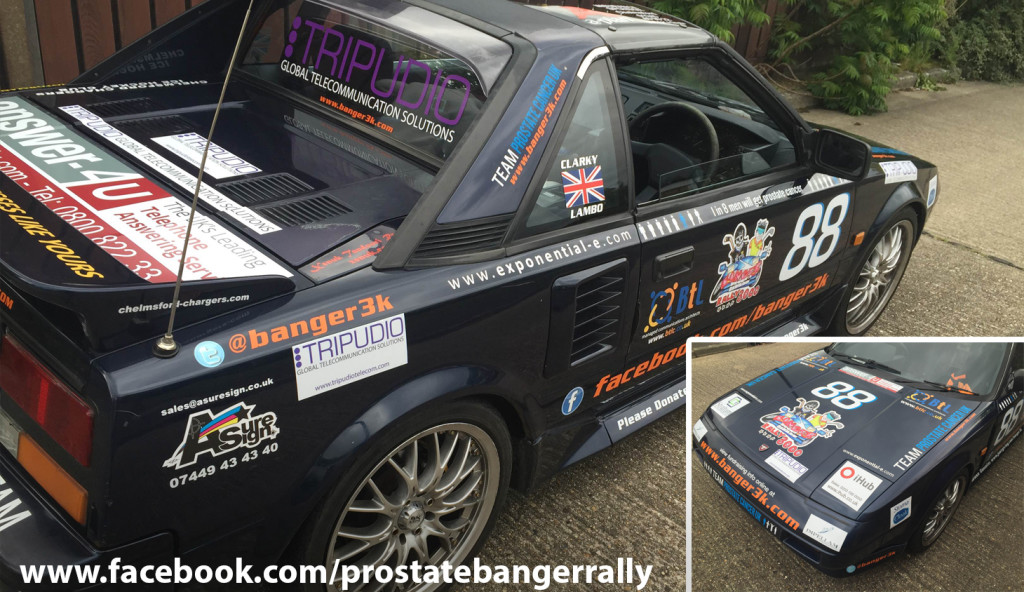 Putting the Pedal to the Metal

As summer approaches, auto racing heats up in Europe. In July, amateur hockey player Adam Clark (Clarky) and his friend Robert Lamden (Lambo) will strap themselves into a 28-year-old Toyota MR2 Mk1 for the 2015 Banger Rally Challenge. The race is similar to the Gumball 3000 Rally, but with old cars that cannot be worth more than £350.

In England, an old car is referred to as “an old banger”. It’s not going to be easy by any stretch of the imagination, and we hope not to break down.” – Adam Clark, “Clarky”

Over the course of ten days, the team will attempt to drive 3,000 miles across France, Switzerland, Monaco, Italy, and thru the Alps. The purpose of the event is to raise awareness and money for Prostate Cancer UK, the largest men’s health charity in the UK, dedicated to helping men survive prostate cancer, and enjoy a better quality of life.

It’s a lighthearted race, but being the first one to the finish line does not mean you have won. There are lots of challenges along the way that need to be completed – and we have no idea what they are yet as it is all secret! It’s very much a social activity, many laughs, great memories. It will be competitive, but I think everyone will be happy just to get to the finish line without breaking down! – Adam Clark, “Clarky”

A Shot and a Goal

Clarky and Lambo have already raised nearly £9,000 for Prostate Cancer UK by selling sponsorship spaces on the car, and from donations. When the team finally arrives back home in London, England, Clarky will wrap up the fundraising event on the ice, as assistant captain, playing for Team Prostate in an All-Stars Charity Ice Hockey Tournament at the home of British ice hockey, Sheffield Arena.

Every man has a unique set of interests. Some men respond to technology under the hood, while others enjoy the screeching of tires on pavement, or the excitement of a shot and a goal. When it comes to men’s health, this summer offers something for just about everyone.

By donating and supporting the boys, you will not only help shift men’s health into high gear, but also help keep our patients and our friends out of the penalty box and firing on all cylinders.

Dr. Brian Stork is a community urologist who practices in Muskegon and Grand Haven, Michigan, USA. He is a member of the American Urological Association’s Social Media Workgroup, and is the Social Media Director at StomaCloak. You can follow Dr. Stork on Twitter @StorkBrian.