We celebrated the two-year anniversary of the international urology journal club this month (@iurojc) with record participation. There were over 500 tweets in the 48 hour discussion of this month’s article, published in New England Journal of Medicine on September 18, 2014, Ultrasound versus Computed Tomography for Suspected Nephrolithiasis. It was a true multidisciplinary discussion with nephrologists, EM docs, and study author, radiologist Rebecca Smith-Bindman tweeting.

This was a multi-institutional prospective randomized control study evaluating bedside and radiology ultrasonography versus CT as the first test performed for patients presenting to the ED with flank or abdominal pain. Patients who initially underwent ultrasound could also receive a CT if the provider felt necessary based on clinical presentation and ultrasound findings. In terms of the primary endpoints, authors found no significant difference across the three groups in high-risk diagnoses with complications related to missed or delayed diagnoses. There was significantly less 6-month cumulative radiation exposure in patients assigned to the ultrasonography groups compared to those assigned to CT. Conclusions of this study in the form of a tweet: Get US first #noharmdone #lessradiation.

Conversation first focused on clarifying the main conclusions of this article. Notably, ED physicians were the focus of this study, who care whether the patient will be admitted or sent home. Information about size, location, etc of stones was omitted from the study since the goal was not definitive stone treatment.

Some of the limitations of the study were brought up early on. First of all, obese patients were excluded (men >129 kg and women >113 kg).

Additionally, the definition of being diagnosed with a stone only applied to individuals who reported passing a stone or having a stone surgically removed.

Much of the conversation focused on how this approach may be beneficial in recurrent stone-formers, although at least a KUB likely needed before taking a patient to the OR.

One of the main issues seemed to be the practicality of universally applying the “ultrasound first” approach. Many institutions do not have ultrasound readily available during night or weekend hours.

ER folks disagreed, and thought that point-of-care ultrasound could be easily adopted.

@soph_cash suggested urologists be the ones to perform ultrasound. Although an important skill to learn, the idea was quickly put to rest.

Author Rebecca Smith-Bindman made a brief appearance in support of the evidence in the study.

Although the conclusions among nephrologists were similar, @uretericbud said it best:

Overall, the consensus seemed to be that the paper presents good evidence for starting with ultrasound in the ED but applying this in all institutions may be difficult. Ultrasound also has limited use for urologists who are focused on stone treatment rather than catastrophic misses. Finally, some concluding thoughts from participants:

Thank you to all the tweeps over the last two years who have provided knowledge, insight, and a healthy dose of comedy to make #urojc such a huge success. Plugging an idea floated by @CanesDavid…

This month’s best tweet prize was sponsored by one beautiful thing vintage furniture.

Lastly, here are the symplur analytics for the month. 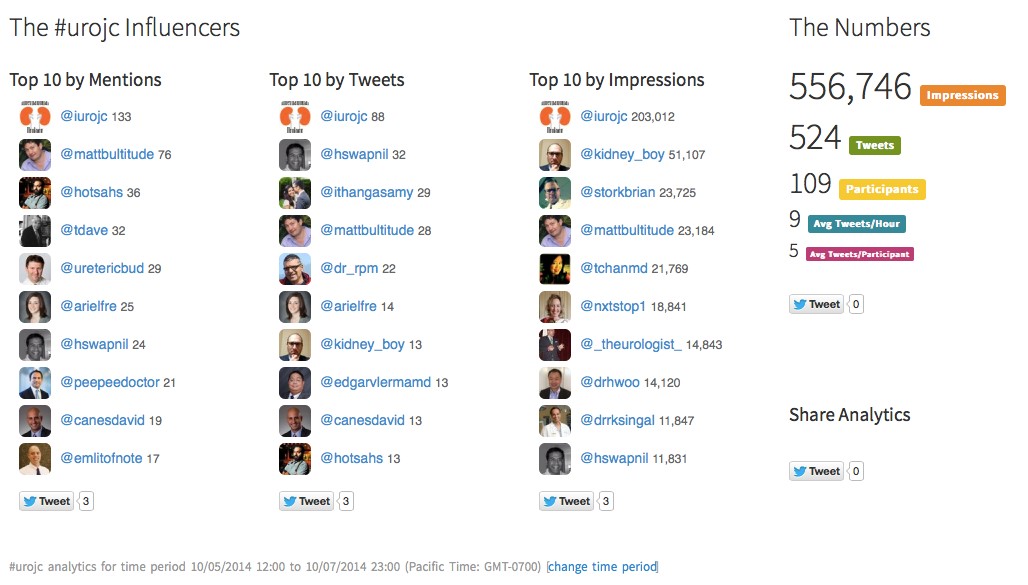 Ariel Fredrick is a PGY-2 urology resident at Lahey Hospital in Burlington, Massachusetts.

Videos: Avoiding breaches of the histological boundaries of the prostate in...