Saluti di Milano! This week the BJUI team are bringing you live updates from the European Association of Urology Annual Meeting in one of Europe’s most beautiful destinations – Milan. Our team has been Tweeting, Facebooking and now blogging from Europe’s premier urology gathering. In fact, we are the leading influencers in social media at this year’s meeting as shown by the metrics updated at Symplur where we registered the official hashtag #eau13. 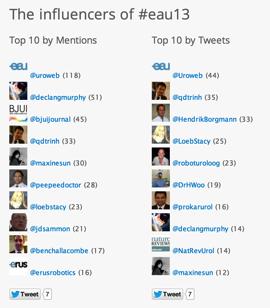 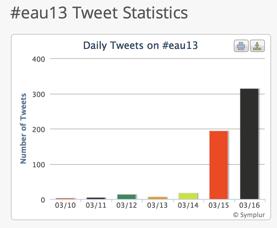 Social media has really taken off at this meeting with the EAU Media team having formalized a strategy to promote social media. By just following #eau13 on your smart device you will receive a constant stream of interesting news and gossip from our team, from the excellent EAU Twitter-feed, and from the increasing number of others who are getting active in social media. One of the features we really like is the live twitter feed running on all the LCD screens detailing sessions around the venue: 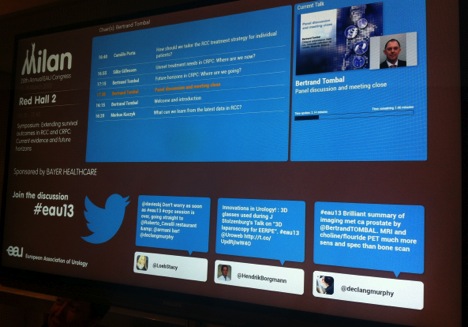 This is something we first used at the Australasian Prostate Cancer Conference in Melbourne in 2012 and we are presenting outcomes from our social media initiatives at that meeting at the forthcoming BAUS meeting in Manchester.

But back to Milan. You have got to admit that one of the attractions of the EAU Annual Meeting is that it usually takes place in Europe’s favourite cities. – Paris, Milan, Stockholm. In the past ten years the EAU meeting has grown from a relatively modest meeting with variable scientific content, to a truly world-class event with very high-quality plenary sessions, poster presentations, video sessions, courses and satellite events. As of close of business on day two today, there were over 10,000 urologists and health professionals registered (and @benchallacombe was awarded Tweet of the Day by the EAU for letting the world know!), with another couple of thousand industry representatives. This is a big meeting! Over 14,000 delegates are expected before the close of the meeting.

The meeting actually started on Friday with a special all-day International Consensus meeting looking at chemoprevention of prostate cancer and five satellite symposiums. Dr Schroder re-iterated his stand that “PSA screening significantly reduces mortality. Harms are identified and quantified; they do not exceed the benefits”. The panel of experts from around the world intend producing a consensus statement on early detection, prognostic markers to predict high-grade disease, and the most appropriate clinical preventions strategies. There were also the “Urology Beyond Europe” meetings which allow urological associations from 11 other regions to run sessions at EAU. This certainly reflects the fact that the EAU meeting is a truly global event, maybe moreso than the AUA meeting. This year there are delegates from over 100 countries . This year’s meeting kicked off in spectacular style two days ago with a lavish opening ceremony featuring an operatic performance from La Scala in the main auditorium: 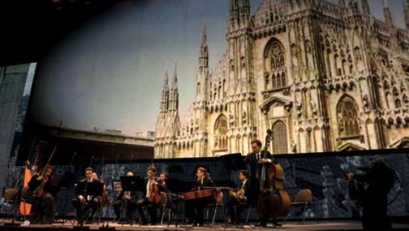 As I arrived in Milan at 0700 on Friday, I spent most of the day in a groggy mess trying to shake off the jet lag having spent 24 hours on a plane. I did make it in to hear Dr Urs Studer issue a call to young urologists at the opening session to “widen your interests, be aware of urology’s many aspects and don’t be a keyhole specialist”.

Saturday morning kicked off in the spectacular style we have got used to with the festival of live surgery that is the European Section of Urological Technology (ESUT) Section meeting. The ESUT has consistently been the most-highly attended Section meeting at the EAU for a number of years and this year was convened in conjunction with the new EAU Robotic Urology Section (ERUS) and the Urolithiasis Section. The main eUro auditorium was packed for most of the day as many thousands of delegates watched the live feed from the operating theatres at San Raffaele Hospital.

Over the day, there were 20 cases of which ten were live and the remainder pre-recorded the previous day. The technical quality was outstanding with all broadcasts in high-definition and some robotic procedures in 3D. The ESUT along with EAU and ERUS will be announcing the new EAU Guidelines on Live Surgery on the closing day of the meeting which will address concerns about the governance and ethical considerations of live surgery. I have blogged about this previously and we all welcome the leadership that EAU/ESUT and ERUS have demonstrated in this area.

Competing with ESUT for numbers on Saturday were six other section meetings, 22 poster sessions, two video sessions, 12 courses and seven sponsored satellite sessions. Myself and other editorial board members and contributors to the BJUI have been tweeting highlights and photos from these various sessions. Here are a few of the headlines:

Of course, a lot of other activity goes on around the periphery of meetings like this. Yesterday I attended the Consulting Editors meeting of European Urology where outgoing Editor-in-Chief Francesco Montorsi welcomed newly appointed successor, Jim Catto from Sheffield in the UK. Jim takes over the reins in January 2014 and we look forward to the new ideas he will bring to the Platinum Journal. Today we have the BJUI Editorial Board meeting which is a great opportunity to meet with our friends and colleagues from round the world who are doing a fantastic job under new Editor-in-Chief Prokar Dasgupta.

These meetings are also a great opportunity to catch up with colleagues from around the world. We are posting pictures on our Facebook site this week and you will see photos on Twitter also. 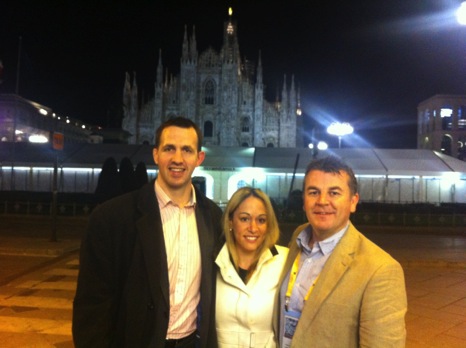