Blog - Latest News
You are here: Home1 / BJUI Blog2 / Transarterial Embolisation of Angiomyolipomas – Not so Cut and Dry

The month of May 2015 saw the International Urology Journal Club #urojc Twitter discussion move away from a cancer topic to a benign one. The discussion centred on the recent Journal of Urology paper entitled ‘Transarterial Embolization of Angiomyolipoma – A Systematic Review’. In this paper Murray et al presented a review of 524 cases of transarterial embolization (TAE) for AML in 31 studies (published between 1986 and 2013) with a mean follow up of 39 months.

The authors reported technical success of the procedure in 93.3% of cases with a mean AML size reduction of 3.4cm (38.3%). Post-procedural mortality was reported in 6.9% and unplanned repeat procedures in 20.9%.

The conversation kicked off on Sunday 3rd May at 22:00 (BST) with a flurry of tweets from around the world. Initially there were brief questions about the sample size and clarity of the results in the paper.

A few contributors were not convinced by the overall efficacy of embolisation in the study.

Post-procedure embolisation-related morbidity was reported in 6.9% of patients. 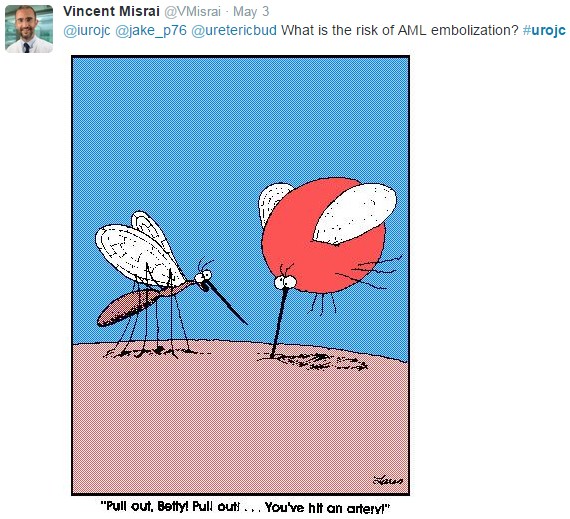 The suggestion of low morbidity moved the conversation away from the paper itself and on to the risks of AMLs if left untreated. The most significant risk of renal AML is bleeding.

There is also the important issue of misdiagnosis

Oesterling et al (1986) published a key paper suggesting that 82% of patients with symptoms had AMLs >4cm. This and other similar papers from the 1980s and 1990s form the basis of treatment protocols for renal AML. The lack of further literary knowledge regarding the natural history of AML became a key sticking point.

Cue the introduction of some more recent literature, suggestive that <2cm AMLs can be ignored (https://www.ncbi.nlm.nih.gov/m/pubmed/24837696/).

This caused further debate about the appropriate screening and management of AMLs. It became apparent that opinions on surveillance vary.

Growth is the important factor. Rate of growth is perhaps more important than actual size in small AMLs.

However there will be data published further supporting this approach to small AMLs.

Are we being overcautious?

Or are we shifting our anxieties to the patient?

There was the inevitable discussion of surgical treatment (partial nephrectomy preferred) instead of embolization. The reasoning for embolization versus surgery was sought out.

Partial nephrectomy allows for definitive treatment of the AML with preservation of renal function and acceptable complication rates.

Embolisation is less invasive without the risks of major surgery and so provides first line treatment for many.

CT angiography findings may aide in treatment choice if the vascular supply is amenable to a successful embolisation with minimal non-target embolisation.

Mammalian target of rapamycin (mTOR) is a protein which regulates cell growth, proliferation and survival. Everolimus, an oral mTOR inhibitor, has been shown to reduce the size and growth rate of Tuberous Sclerosis related AML.

As AMLs are benign tumours with significant potential complications, there may be wider variations in management protocols than would be seen with a malignant tumour. Perhaps patient preference, or urologist preference plays much more of a role in individual cases.

As always the debate was interesting and raised a number of key points. Discussion focussed more on overall issues around the management of angiomyolipoma following a brief discussion of the paper itself. The literature is lacking recent high level evidence for treatment of angiomyolipoma. Whilst most follow classical teaching of intervening in symptomatic and larger tumours (>4cm), there is wide variation in the follow up and surveillance of small tumours.

More recent data suggests smaller tumours may not require close follow up. Perhaps rate of growth, much like PSA dynamics in prostate cancer, is more important than the actual size of the tumour. There is also evidence lacking in the direct comparison of embolization versus nephron-sparing surgery for angiomyolipoma.

This draws to a conclusion the summary of the May #urojc summary blog. Please follow @iurojc on Twitter for updates and to get involved on the first Sunday/Monday of each month.

Capsaicin, resiniferatoxin and botulinum toxin-A – a trip down memory lan...
Scroll to top