Percutaneous ablation therapies have become an increasingly important treatment option for smaller volume renal tumours. Microwave ablation (MWA) appears to have significant advantages over radiofrequency ablation (RFA) in terms of treatment times and achievable ablation zone volumes. We report the case of a fit 71 year old gentleman with a 17mm slow-growing cortical lower pole renal carcinoma. Given the small volume nature of the tumour, MWA was used instead of cryoablation (CRA) so as to avoid the potential need for multiple cryoprobes. The tumour was successfully treated with MWA with no immediate post-operative complications. On day 7, the patient returned with flank pain and CT confirmed a pelvi-calyceal leak requiring retrograde stenting. Unexpectedly, at five months, a follow-up CT indicated global hypoperfusion. This was confirmed with a MAG-3 renogram showing only 12% contribution to overall function. To date, there have been few reports of microwave ablation of renal tumours. This small, cortical renal tumour would have been expected to undergo straightforward ablation treatment. The subsequent functional demise of the kidney was unexpected in this case. The mechanism of global renal injury remains unclear and more research regarding ablation physiology and dosimetry is required.

Introduction
The percutaneous treatment of renal tumours by ablation therapies is now increasingly accepted as a useful therapeutic option. Currently the routinely available options are cryoablation (CRA) or thermal ablation using either radiofrequency (RFA) or microwave (MWA) technology. Traditionally, RFA has been the mainstay of treatment causing targeted cellular death via coagulative necrosis. Whilst RFA has a relatively well documented efficacy, microwave ablation has great potential to overcome some of the disadvantages of RFA. The main theoretical advantages are in terms of ablation zone volumes achieved (1, 2), time efficacy and there being no requirement for grounding pads (3, 4).
Each technology has a specific mode of tissue ablation and hence treated tissue characteristics are an important consideration in this case. For microwave ablation the important physical features are relative permeability and effective conductivity (3). For the kidney, high renal perfusion rates can compromise treatment by yielding inconsistent, geometrically variable ablation zones (3, 5). These effects are particularly evident close to larger peripelvic vessels. Microwave technology has great potential here due to its rapid tissue heating characteristics; however, accurate treatment dosimetry still remains an issue similar to RFA.
There is a relative paucity of literature regarding microwave ablation of renal tumours. A literature search has found 3 small studies showing preliminary data regarding microwave ablation of small renal tumours. The results are mixed, with 2 studies showing good technical outcomes and few complications (6, 7) and the third showing a poor technical outcome with associated intra-operative and post-operative complications as high as 20 and 40%, respectively (8).

Case report
The patient was referred from another hospital for minimally invasive, image-guided biopsy and ablation given the small but solid nature of the lower pole cortical mass.
He was 71 and previously fit and well, with no significant past-medical history other than a single episode of atrial fibrillation 14 years ago. He was not taking any medication and was symptom free.
The lesion was 17mm in size and peripheral in the cortex of the lower pole of the right kidney (Figure 1). 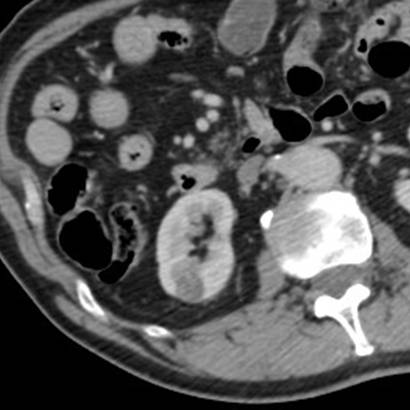 Figure 1. Portal venous phase CT confirming a solid but hypovascular tumour towards the lower pole of the right kidney.

For the last 3 ½ years CRA rather than RFA has been the mainstay of small renal tumour ablation at our institution. But, given the small nature of the tumour and benefit of a single probe and single site treatment, MWA was agreed. The patient was given pre-operative prophylactic intravenous antibiotics (metronidazole and cefuroxime) 1 hour before the procedure. He was positioned prone under general anaesthetic, and 2 CT guided 18G core biopsies of the lesion were taken. A single stick microwave probe was placed within the lesion under CT guidance. Position was confirmed and microwave ablation was performed. The first cycle was for 3mins 28secs at 180W followed by a 1.5cm draw back and second cycle of 4 mins at 180W with subsequent track ablation.
There were no immediate complications. The patient was sent back to the ward and discharged the following day. Histology of his biopsies showed low grade nuclear features consistent with a partly cystic well differentiated clear cell carcinoma.
On day 7 post-procedure, the patient was re-admitted due to increasing right flank pain. He underwent CT of his abdomen and pelvis with arterial, portal venous and delayed phases (5 mins) being obtained. These showed an adequate, wedge-shaped, non-enhancing ablation zone (Figure 2).The 5 minute delayed study however confirmed free leakage from the lower pole calyx with a moderate retroperitoneal urinoma. On the next day the patient underwent cystoscopic placement of a retrograde ureteric stent to divert the calyceal urine leakage. 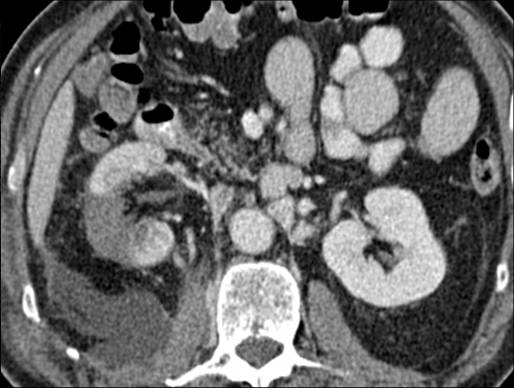 A repeat CT at 1 month showed resolution of the urinoma with no further leak. Again the lesion appeared well treated with a wedge-shaped area of non-enhancement, Figure 3. 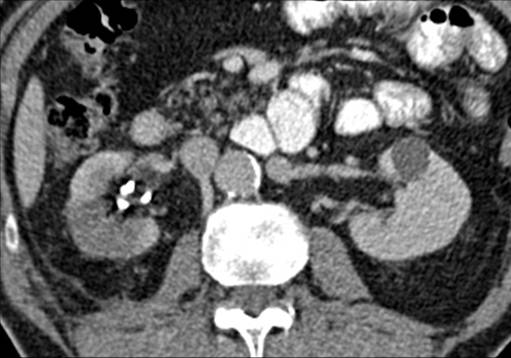 At 5 months post-treatment a further follow-up CT scan demonstrated globally diminished perfusion of the right kidney (Figure 4). This was confirmed by a MAG3 renogram which showed only 12% of the total function attributable to the right kidney. 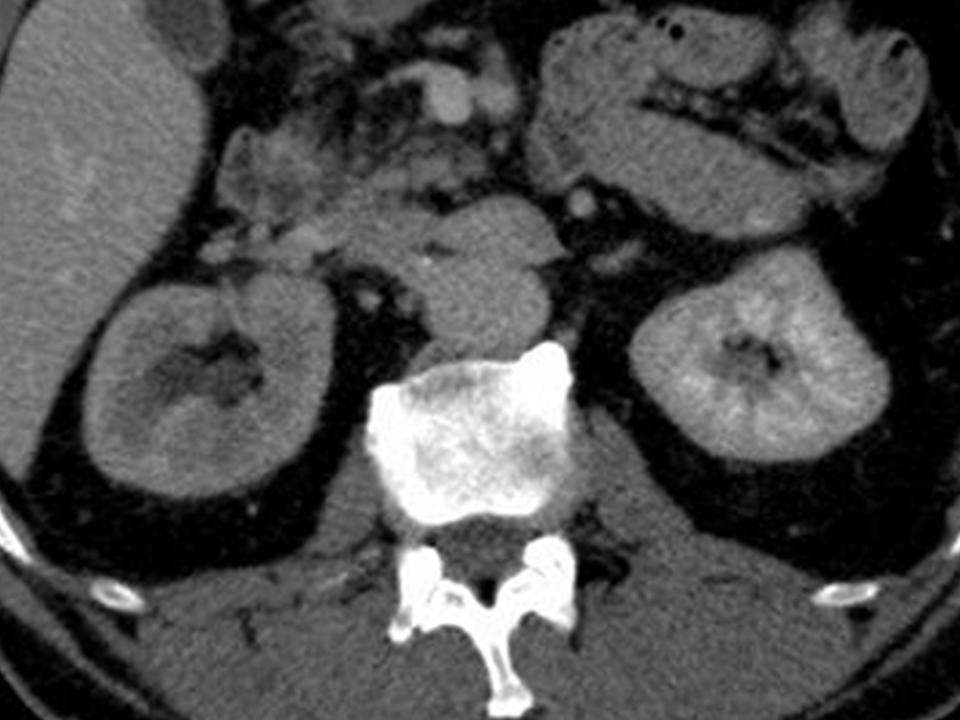 Discussion
MWA offers significant theoretical benefits over RFA in terms of reduced treatment time, ablation volumes achieved and possibly more predictable treatment geometry. In this case, the small cortical tumour was appropriately treated as evidenced by the typical wedge-shaped ablation zone. With hindsight the first station of the probe was likely in too close a proximity to the lower pole calyx. It could also be argued that the 2 station treatment of 3 minute 28 secs at 180W followed by a further 4 minutes at 180 W peripherally in the cortex represented local over-treatment. But the ablation zone at 7 days and at 1 month suggests that this was not the case and that the resultant ablation zone was only adequate for the tumour ablation undertaken. Even if the calyceal injury could have been avoided by rather more ‘cortical’ positioning of the probe, the propensity for microwave ablation to cause pelvicalyceal injury in this case is striking and more so than might have been expected with image-guided cryoablation. In fact this observation has been confirmed by in vivo porcine studies where thermal based RFA was found to incur pelvicalyceal injury much more readily than CRA for the same probe positioning and ablation zone volumes (9, 10).
The clear benefit of ablation is to offer a more targeted treatment whilst maintaining overall renal function. The unexpected procedural outcome here is the subsequent delayed global hypoperfusion and hence loss of function of the kidney at 4-5 months. This suggests that microwave energy deposition within the kidney may have a greater propensity to cause a more diffuse and non-target renal injury.
The key issue in this case is treatment dosimetry and to date little or no data is available on this issue from MWA manufacturers. Whilst the ablation zone achieved in this case was only adequate to ablate the target tumour, the mechanism of the subsequent functional demise of the kidney remains unclear but likely related to a diffuse microwave heating effect. There is clearly a requirement for further in vivo MWA dosimetry clarification, likely using a porcine renal model.