Case report
A 30 year old woman with a history of polycystic ovarian disease was incidentally found to have a urinary bladder mass of 2X2 cm on Ultrasound. She did not have any urinary symptoms or haematuria. Contrast enhanced computed tomography (CECT) scan showed a focal minimally enhancing soft tissue mass lesion of 17X13X16 mm size on the right side of the bladder dome, with perivesical fat stranding. There was no significant locoregional adenopathy. (Fig 1A,B,C)
Figure 1
1A, 1B: Contrast enhanced CT scan of pelvis. The arrow shows the mass in the urinary bladder near the dome
Figure 1C: follow up CT scan at 6 months showing no tumour
Figure 1D: Cystoscopy showing the laminated appearance of the tumour on resection 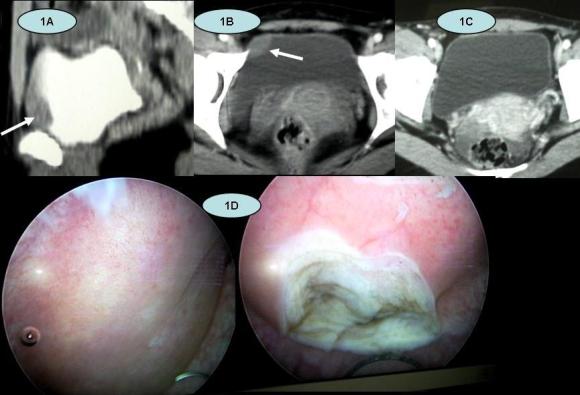 Urine routine examination showed 1-2 red blood cells / high power field (hpf) and 2-3 white blood cells / hpf. Her renal function tests were within normal limits. Urine cytology did not reveal any malignant cells.
The patient was taken up for cystoscopy with a provisional diagnosis of Carcinoma of the  urinary bladder. There was no perivesical streaking or infiltration as noted on contrast enhanced CT scan. Clinical staging was T2 N0 M0. Cystoscopy was done under general anaesthesia. There was a bulge noted at the dome and right posterolateral wall with intact mucosa over it. Bipolar resectoscope was used for resection. On resecting the mucosa the tumor seemed to be situated in the bladder wall, with a laminated appearance suggestive of its mesenchymal origin (Figure 1D). Intraperitoneal bladder perforation occurred accidentally while trying to achieve complete tumor resection, as tumor was extending up to the serosa. An abdominal drain was placed for 4 days. A cystogram done on the seventh post operative day showed no leak and a regular bladder wall outline. The Foley catheter was removed on the 7th postoperative day and the patient was discharged.The pathological report came as ganglioneuroma of urinary bladder invading the bladder wall (Figure 2).
Figure 2 Histologic appearance of the tumour showing Ganglioneuroma of urinary bladder:
Figure (2A)- Hemotoxyline and eosin stain, 40X, Arrow showing muscularis propria infiltration by the tumour
Figure (2B)- Hemotoxyline and eosin stain, 40X, Arrow showing  numerous ganglion cells in a fibrillary background
Figure (2C)- 200X, S 100, Immunohistochemistry, Arrow showing S100 positivity in nucleus of tumour tissue, indicating neuronal origin
Figure (2D)- 200X, SMA, Immunohistochemistry, SMA negative in tumour tissue, indicating no smooth muscle differentiation. SMA positive only in blood vessel walls (arrow) 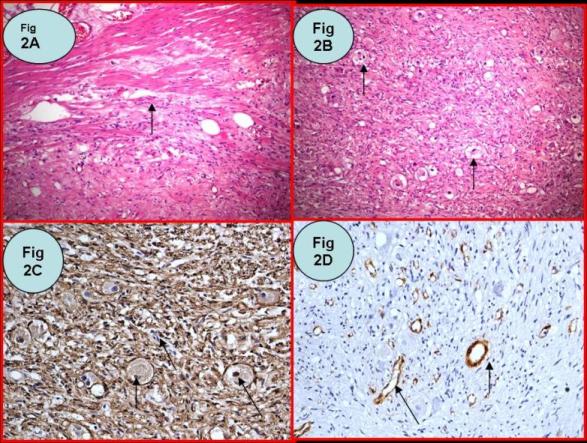 Immunohistochemistry with S100 was positive, while SMA (smooth muscle antigen) was negative. The patient recovered well. Follow up CECT scans at 3, 6 and 12 months showed no recurrence of tumour in the urinary bladder.
Discussion
Ganglioneuroma is a benign neurogenic tumor arising from sympathetic ganglia. They are rare tumors that most frequently start in the autonomic nerve cells, which may be in any part of the body. Ganglioneuromas are thought to be the fully differentiated counterpart of neuroblastomas. They are highly differentiated benign tumors and are compatible with long-term disease free survival, even though surgical treatments are unsatisfactory (1). About 60% of all patients with these tumors are younger than 20 years, most being less than 10 years of age. There is a slight female preponderance. Since ganglioneuromas may release catecholaminergic peptides, surgeons should be aware of the possibility of hypertensive crisis during the surgery (2). Ganglioneuromas most frequently occur in the posterior mediastinum 43%, followed by the retroperitoneum 32% and the neck 8% (3). Ganglioneuromas involving the genitourinary tract are extremely rare but are potentially serious tumors. It consists of spindle cells, fascicles composed of neuritic processes, Schwann cells, perineural cells and numerous ganglion cells. Immunohistochemically they are characterized by reactivity with S100 and neuronal markers such as NSE (neuron specific enolase) and synaptophysin4. According to many authors, surgical excision is sufficient for the treatment. Partial cystectomy or radical cystectomy is the recommended treatment modality. Preoperative or postoperative chemotherapy or radiotherapy have no value in the treatment except when it is associated with ganglioneuroblastoma changes when there might be some role for chemotherapy. Even with residual disease, cessation of all other treatments and a close follow-up may be adequate (4).
Five cases of composite paraganglioma-ganglioneuroma of the urinary bladder (CPGUB) have been reported in the English-language literature. These cases showed no malignant features, such as extra-bladder infiltration and metastasis, and no recurrence in the short period of follow up. A case of malignant peripheral nerve sheath tumor of the bladder in a 57-year-old man with multiple neurofibromatosis type 1 has been reported. The patient had a recent history of a transurethrally resected bladder ganglioneuroma. A probable histogenetic association between these two extremely rare neoplasms is proposed (5). Isolated Ganglioneuroma of urinary bladder without any other systemic disease has not been reported in literature so far.
Conclusion
Ganglioneuroma is a rare tumor of urinary bladder. TURBT with resection of full thickness of bladder wall provided a complete resection of tumor in this case. TURBT can be a treatment option in such tumours as an alternative to partial cystectomy.
References
1. Hayes FA, Green AA, Rao BN. Clinical manifestations of ganglioneuroma. Cancer 1989;63:1211-4.
2. Moriwaki Y, Miyaka M, Yamamoto T, Tsuchida T, Takahashi. S, Hada T et al.  Retroperitoneal ganglioneuroma: a case report and review of the Japanese literature. Intern Med 1992;31:82-5.
3. Jasinki RW, Samuels BI, Silver TM. Sonographic features of retroperitoneal ganglioneuroma. J. Ultrasound Med 1984;3:413-5.
4. Kleihues P, Cavenee WK. World Health Organization Classification of tumors, pathology and genetics of tumors of the nervous system. Lyon 2000;153-61.
5. Kalafatis P, Kavantzas N, Pavlopoulos PM, Agapitos E, Politou M, Kranides A. Malignant Peripheral Nerve Sheath Tumor of the Urinary Bladder in von Recklinghausen Disease. Urol Int 2002;69:156-9.
Date added to bjui.org: 04/10/2010
Vitamin D recommended intake Renal Vein Leiomyosarcoma
Scroll to top