You are here: Home1 / advice 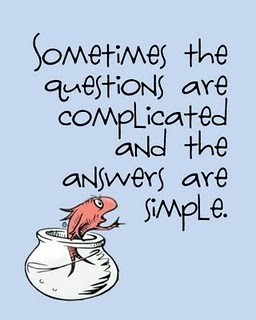 I saw a patient recently who presented with a number of different symptoms on the background of a complex past medical history. I rang my senior who quoted me these words,

“Sometimes the questions are complicated but the answers are simple”

I’ll tell you where he got that quote from later

One CT scan later we had our diagnosis but it got me thinking about the advice we receive from senior colleagues.

During our formal urology training we are mentored by urologists who at times impart advice to enable us to become better. The words spoken in a timely manner or often a repeated manner can become etched into a young surgeon’s mind.

Early in my surgical training I sat dejected in the professor’s office. A life threatening complication had occurred in one of our team’s patients after major open surgery. I was ready to throw the towel in, to no longer perform large operations to therefore avoid complications. I would be safe if I only ever performed minor procedures for the rest of my career.

Spoken by one who had been there and done that and come out the other side. Years later near the end of my training I was lucky to operate again with this surgeon and thanked him for his words of advice. However as often happens in a moment of stress, similar I imagine to the moment a diehard fan meets their rock star idol, I proudly repeated back his words only for him to correct me again, as I had spoken them in the wrong order.

Story two took place after a Saturday ward round over coffee. Real coffee – (flat whites as we call them in New Zealand) in the hospital café where there was time to talk – no theatre list, no private clinic to rush off to.

I was implored to chase after the complications that happen to all patients in the hospital. So as to learn as much from them and how they were managed to avoid it in my own practice in the future. It challenged me to investigate, to read, to apply knowledge, to sit up in the monthly audit and to ask questions of why things happen.

3 statements have helped guide my surgical training. Said in isolation they mean little and could even sound cliché. However coming from a respected mentor at an appropriate time in a personalised fashion they have proved of immense value. And the further beauty is they will have repeated value as I attempt to pass them on in the future. Which brings me back to the opening statement and the whereabouts of its origins. Indeed those words were not my consultants own but rather that of another doctor. Dr. Seuss to be exact and it only goes to show that advice is often where you least expect it.


Advice’s You Need to Know About Hair Loss, According to Dermatologists

If you’ve noticed patchy or thinning spots on your scalp or a surplus of hair strands on your hairbrush or in the shower, you’re not alone. More than half of all women will experience noticeable hair loss, according to the Cleveland Clinic. In order to put a stop to shedding, though, you have to figure out the root of the problem. “Hair loss is not a diagnosis,” says Yolanda Lenzy, M.D., M.P.H.,board-certified dermatologist and licensed cosmetologist in Chicopee, Massachusetts. “Hair loss is a symptom. Once you get a specific diagnosis, then you can know the causes associated with that diagnosis.” You can check some of the best dermatologist melbourne on doctor to you site.

For starters, know that the term “alopecia” refers to all kinds of hair loss. There are two main types of alopecia, and then a variety of forms of hair loss within those two categories. In cases of non-scarring or temporary hair loss, the missing hair will eventually grow back. With scarring or permanent hair loss, permanent damage is done to the hair follicles so they won’t grow back. “With scarring hair loss, the goal is not for it to grow back, but to stop the progression,” says Dr. Lenzy. Below, are seven different kinds of alopecia —knowing which one you’re suffering from will help determine the proper treatment.

When people talk about male or female pattern hair loss — typically a receding hair line in men or thinning at the crown in women — that’s androgenetic alopecia. It’s the most common form of hair loss among all people. In fact, research shows that more than 50% of women will develop androgenetic alopecia by the age of 80. “It can come from either side of the family in men or women, skip a generation, and start earlier in the next generation that the one before it,” says dermatologist Carolyn Goh, M.D., Health Sciences Assistant Clinical Professor at the David Geffen School of Medicine and Director of the Hair and Scalp Disorder Clinic at UCLA. “However, some people have pattern hair loss without a family history of it.” While some women start showing signs of androgenetic alopecia in their teenage years, others won’t experience it until their 50s or 60s. “When nearing menopause, the decrease of estrogen means you have unopposed testosterone,” says Dr. Lenzy. “That elevated testosterone can convert to a hormone called dihydrotestosterone (DHT), which contributes to the thinning of the hair follicles — the follicles actually get smaller in this particular form of hair loss.”. If you have straight hair then consister a permed texture you should buy kinky straight hair.

Telogen effluvium is just a fancy name for excessive hair shedding — an annoyance that many people will experience at some point in their life. “A common cause is stress, usually meaning major life stressors or physical stressors like surgery, medication (including over the counter ones and supplements), weight loss, or a death in the family, to name a few,” says Dr. Goh. “It usually starts three to six months after a stressor and then lasts for three to six months.” Hypothyroidism and iron deficiency can also trigger telogen effluvium. “The beautiful thing about it is 70% of your hair strands are still in the anagen or growing phase,” adds Dr. Lenzy. “Because the hair follicles work in a cycle, you won’t go bald.”

This type of hair loss affects about 2% of people and usually appears as round smooth circles anywhere on the head without any redness, itching, or pain. “Alopecia areata is thought to be caused by an autoimmune process,” says Dr. Lenzy. “The body’s immune system makes some mistakes and produces T cells that attack hair follicles.”

Thinning and bald patches at the temples or where hair is frequently pulled tight can indicate traction alopecia. “This very common form of hair loss is caused by haircare and hairstyle practices — practices which place excessive tension or weight on the follicles like braids, ponytails, hair extensions, or locs.”

“Central centrifugal cicatricial alopecia tends to start on the top of the head with breakage and thinning, and often with some tenderness of the scalp,” says Dr. Goh. “It gradually spreads outward and can cause permanent hair loss.” CCCA is especially common among Black women. “Some recent studies have found that about 25% of people with this form of hair loss have a genetic mutation in one of the proteins that’s responsible for the formation of the hair follicle,” says Dr. Lenzy. On top of that, she notes that the same haircare practices that create tension and cause traction alopecia also contribute to CCCA.