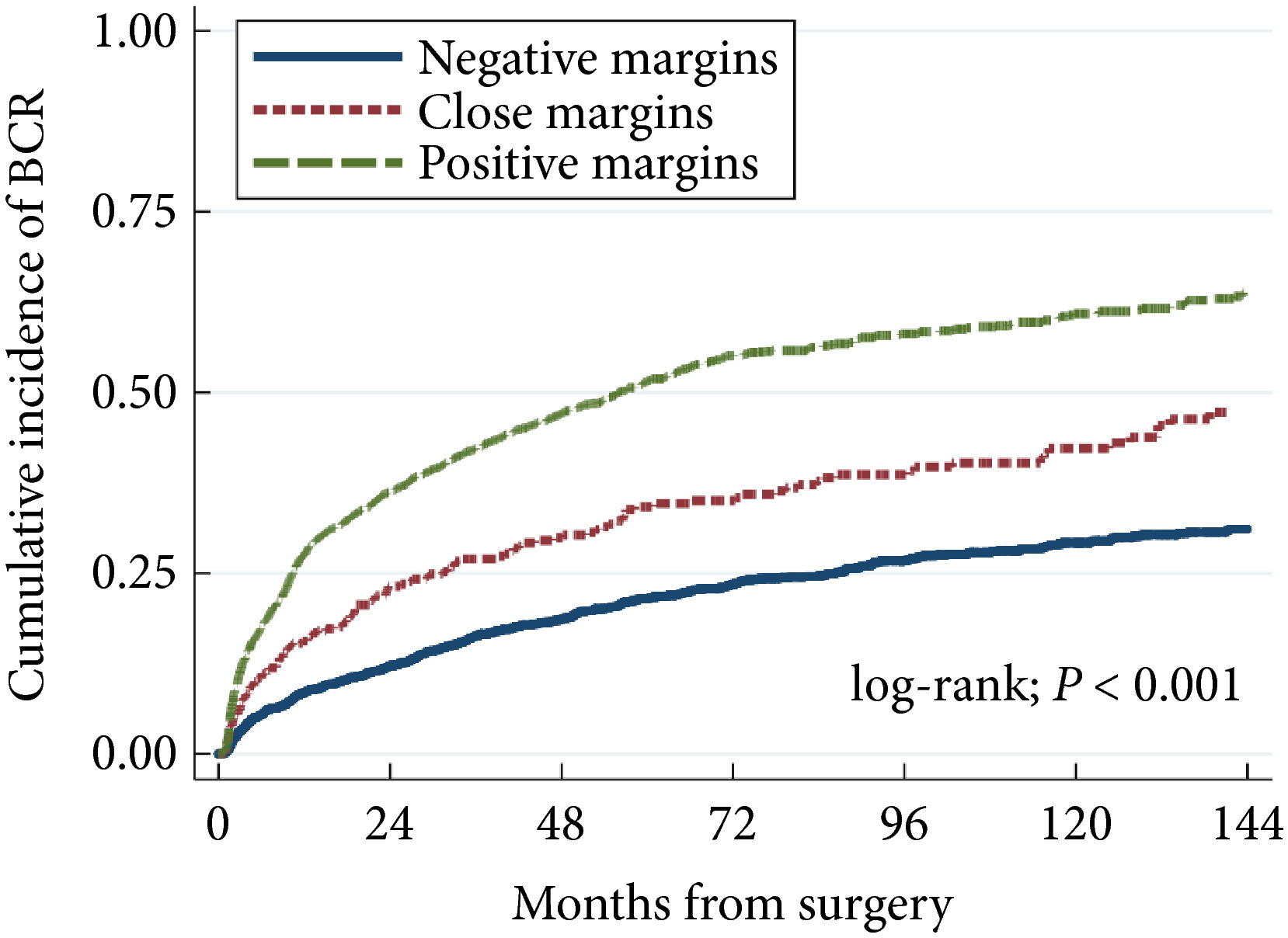 Men undergoing RP between 1988 and 2015 with known final pathological margin status were evaluated. The cohort was divided into three groups based on margin status; NSM, PSM, and CSM. CSM were defined by distance of tumour ≤1 mm from the surgical margin. BCR was defined as a prostate‐specific antigen (PSA) level of >0.2 ng/mL, two values at 0.2 ng/mL, or secondary treatment for an elevated PSA level. Predictors of BCR, metastases, and mortality were analysed using Cox proportional hazard models.

Management of men with CSM is a diagnostic challenge, with a disease course that is not entirely benign. The evaluation of other known risk factors probably provides greater prognostic value for these men and may ultimately better select those who may benefit from adjuvant therapy. 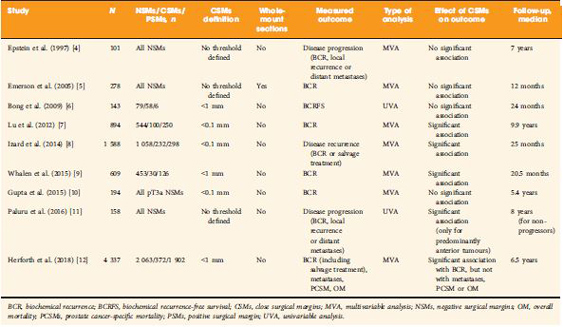 Surgical margin (SM) status after radical prostatectomy (RP) for clinically localized prostate cancer (PCa) is a measure of surgical quality and retains some prognostic value. Positive SMs (PSMs) have long been considered an adverse oncological outcome because they were repeatedly found to be associated with a higher risk of biochemical recurrence (BCR), and are still among the factors guiding the decision to deliver adjuvant treatments; however, the long‐term impact of PSMs on survival remains uncertain because it is largely affected by other concurrent risk modifiers [1,2,3].

The clinical significance of so‐called close SMs (CSMs), that is, negative SMs (NSMs) with tumour foci approaching, but not involving, the inked cut surface of the RP specimen, is a far less investigated field of research, with contradictory findings in the few available studies (Table 1 [4–12]). Some studies showed a significant association with risk of disease progression (mainly measured with BCR), while others did not.

The study by Herforth et al. [12] published in this issue of BJUI further adds to the debate on CSMs, with an analysis of the largest series reported to date. The authors assessed the impact of CSMs vs NSMs vs PSMs after RP on BCR, PCa‐specific and overall survival in ~4 300 men included in the Shared Equal Access Regional Cancer Hospital cohort. CSMs were defined as cancer foci within 1 mm from the inked specimen surface, and were found in 372 patients (9%). The median follow‐up was 6.5 years. On multivariable analysis accounting for several established prognostic factors, CSMs were significantly associated with a higher BCR risk compared with NSMs, but a lower risk compared with PSMs. Notably, SM status alone did not influence PCa‐specific or overall survival. Major limitations to this retrospective analysis were lack of central pathology review and inadequate follow‐up length to assess survival.

The main question yet to answer is whether CSMs entail a biological entity that is distinct from both negative (but not close) SMs and PSMs. Advances in this area cannot be made without taking into consideration the knowledge of PSMs that has accumulated over the past years. We suggest, therefore, that the following principles be adhered to in order to ascertain the true significance of CSMs.

The truth about SMs after RP is still hard to reach, and the issue of CSMs possibly complicates this scenario. While we await further characterization of PCa facilitated by advances in genetic profiling, we recommend that future clinical research in the field does not run into the methodological obstacles of the past. 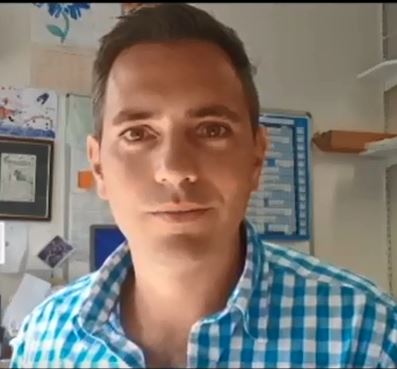