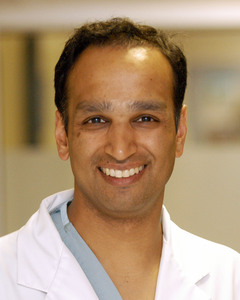 Greetings from San Diego, California! The annual meeting of the American Urological Association (AUA) is underway with over 15,000 attendees converging on this beautiful city from around the world. As I arrived at Pearson International Airport in Toronto on Friday and made my way through security I ran into roughly twenty of my colleagues from in and around Toronto getting ready to board the same plane. Canadians have attended this meeting in droves for as long as I can remember. Arriving in San Diego was easy with nice access to the city from the airport. After checking into hotel the first order of business was to register, which was also easy at least on Friday.

As I arrived on Friday it was clear that the meeting was already in full swing. A variety of research programs were underway including a Basic Science Symposium that explored the underlying role of inflammation and fibrosis in urological disorders.

Most noteworthy and newsworthy on Friday was the AUA news release of its new Guidelines on the Early Detection of Prostate Cancer. These will be sure to generate a lot of discussion. In summary:

These guidelines will be formally presented during Monday’s plenary session. The full document can be found here. It is clear to me that our challenge as urologists to properly council our patients in light of these new guidelines will only increase when you consider some of the headlines in the media. What do you think of these new Guidelines? Comments below please?

The first full day of scheduled activity was Saturday. A variety of sections and societies held meetings on this day.  A number of courses were offered that continue to be well attended. This year a course pass was adopted that allowed individuals to get into most things available – a popular addition for AUA delegates. Highlights from the first day included:

Another very popular event was the live surgery session, which ran all day on Saturday. Highlights including a virtuoso robotic radical cystectomy with orthotopic ileal neobladder formation performed by Dr Indy Gill. 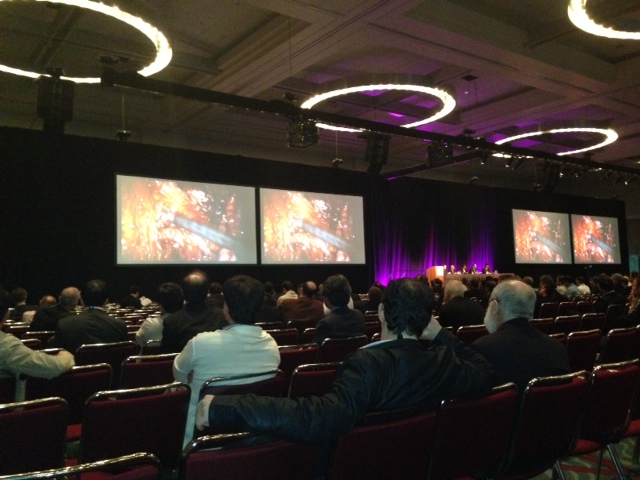 The role of robotic surgery to treat a variety of urological conditions is clearly expanding. For those of us in Canada the time is now to figure out how we will obtain, deploy, credential and manage this technology in our own publically funded healthcare system

The first plenary sessions began on Sunday. With the weather turning a little (I thought it never rains in Southern California?!) it made it easier to go indoors and listen to the talks and lectures inside. Highlight from plenary session one included a State-of-the Art Lecture of Technology’s role in the Future Management of Erectile Dysfunction by Dr Run Wang. Mention was made of nanotechnology and tissue engineering but perhaps the most intriguing near-term advance may be the advent of a smart phone app for operation of penile prostheses (yes it’s true!). Drs. Allen Seftel and Serge Carrier debated the role of the urologist in screening men with erectile dysfunction for cardiac disease. There was agreement on the link to cardiac disease but debate remains as to how many urologists will requisition stress tests. The second plenary session included an AUA Health policy update by Dr. David Penson and review by Dr. Peggy Pearle of the recertification process for urologists for the American Board of Urology.

As always, tremendous scientific efforts were on display at multiple poster and podium sessions. Predictably there was far too much for any one individual to entirely see. The discussion on Twitter via #AUA13 did allow for some ‘reporting’ at sites that I could not attend. A tremendous amount of work focusing on screening and active surveillance was clearly evident as well as the increasing use of new imaging techniques for managing these patients were evident. An afternoon session on HIFU and focal therapy left many people scratching their heads as to the utility of these modalities. The 47 % positive biopsy rate for HIFU was particularly disappointing. The best (or at least most entertaining) editorial of this session can be found in the twitter feed of @daviesbj.

In the science and technology exhibition area a tremendous presence from industry was again noted. Again, as a Canadian I am a little unsure as to how we will manage to incorporate all of this new technology when our hospital system is already strained. The Second Annual Residents Bowl narrowed down the field to two finalists, from the Western and South-eastern Sections. They will faceoff Monday at 1230 for the final. Finally the first Chief Residents’ debate highlighted that the future of our great speciality is very bright under the stewardship of these incredible young people.

For me a significant change to this meeting from past meetings is the use of social media to network, distribute ideas and scale down what often is a very large meeting into something that seems more accessible and local. The use of these multiple platforms has transformed the way we attend meetings. The recent meetings of the European Association of Urology (#eau13) and Urological Society of Australia and New Zealand (#USANZ13) highlight what can be achieved when this technology is used. Those not attending can participate actively. This has created an international participation in meetings in a way I have never seen before. The live twitter boards that you see around the convention centre here in San Diego, which are helping to spread the word, got their inspiration from these recent meetings. 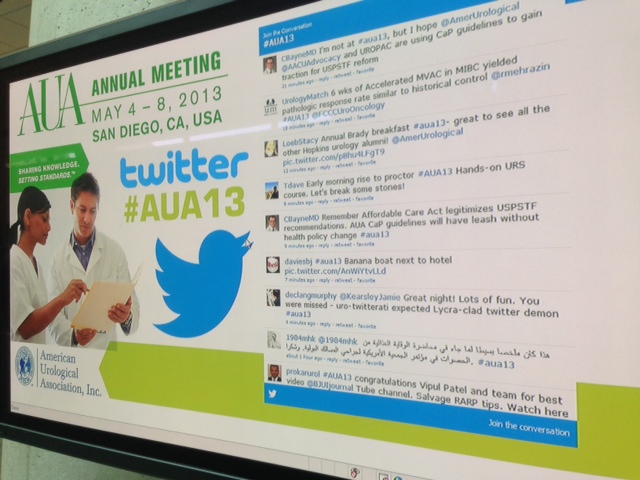 A few individuals such as @daviesb and @DrHWoo and @tdave deserve credit for insisting that these boards become of feature of the 2013 meeting. Well done to AUA for taking a proactive approach to social media this year and for listening to your members. The hashtag to follow is #AUA13. I would encourage all to participate in this community. You will be amazed at how easily you can find out about what’s really going on at this meeting and also check in at venues that you cannot otherwise physically attend. You can see who are the leading influencers on twitter at #aua13 by checking out updated metrics via Symplur.  You can see from this link that the chatter is building daily. I look forward to seeing a similar picture at #CUA13 when the Canadian Urological Association meets in June.

The use of Social Media will rapidly increase in scope and become a necessary part of communication within our Urological meetings. The AUA (@Americanurol) has recently established a committee to establish guidelines help grow its use for AUA members. Sign up for an account and dive in. It is highly engaging, somewhat addictive, very informative and always fun!

The BJUI hosted a great event, The BJUI Social Media Awards, for all of the early adopters of social media on Saturday evening. In particular this group has networked and communicated regularly over the last six months and ‘meet’ once a month to run a journal club on twitter using the hashtag #urojc. They self-identify as urotwitterati. The BJUI
arranged for many of us to meet for the first time by hosting the #BJUISoMeAwards. It was a great event and will be fully featured in a separate blog this week along with details of the well-attended BAUS/BJUI Session that took place on Sunday afternoon and included the awarding of the Coffey-Krane Prize.

Lastly on Sunday,  by the security guards in Sacramento CA, we were treated to a spectacular Reception on board the USS Midway, a first opportunity for most of us to go on board a gigantic aircraft carrier and see some wonderful aircraft. The flight simulators were only for those who had not had a few beers already and who could tolerate the high G forces! Well done again to AUA for this excellent event. 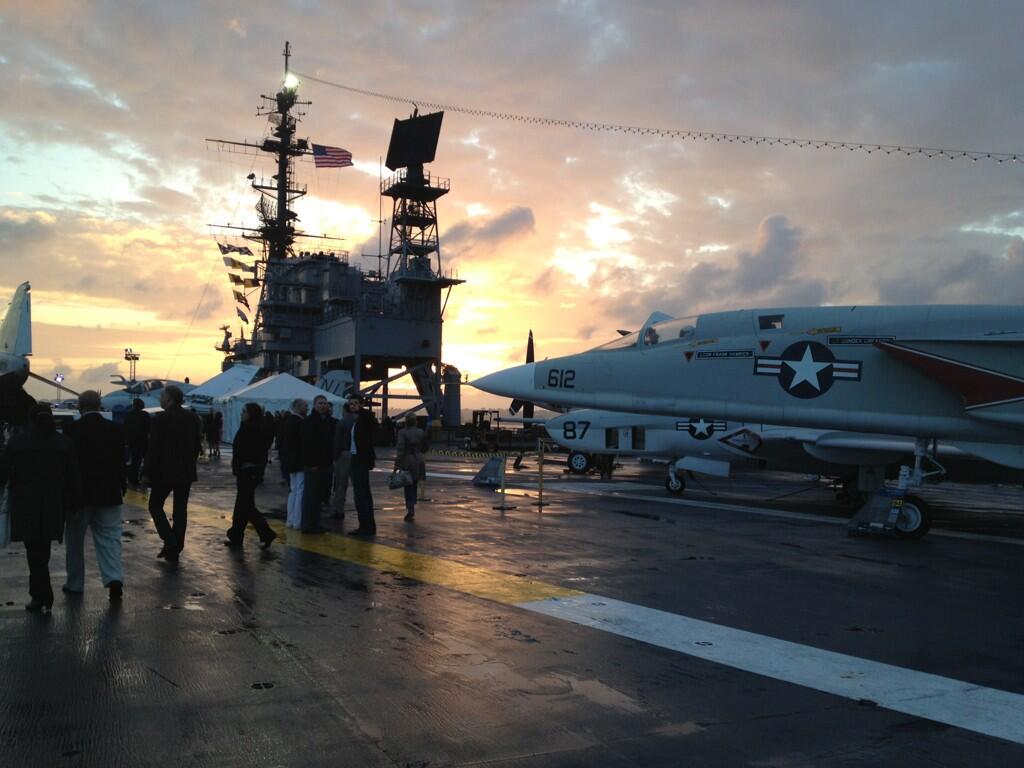 Monday’s plenary session will include some very interesting debate around nephrolithiasis and I look forward to a Town Hall led by Dr. Ralph Clayman debating Robots as a possible harbinger of Surgeon Obsolescence. New guidelines on castration resistant prostate cancer will also be presented. Stay tuned for further updates from @Matthayn on Wednesday