Many of us have developed an addiction to sports this summer. The World Cup football in Brazil with its continuous party spirit, the lush green lawns of Wimbledon and then the Test series between India and England. Our Web Editor could not contain himself: 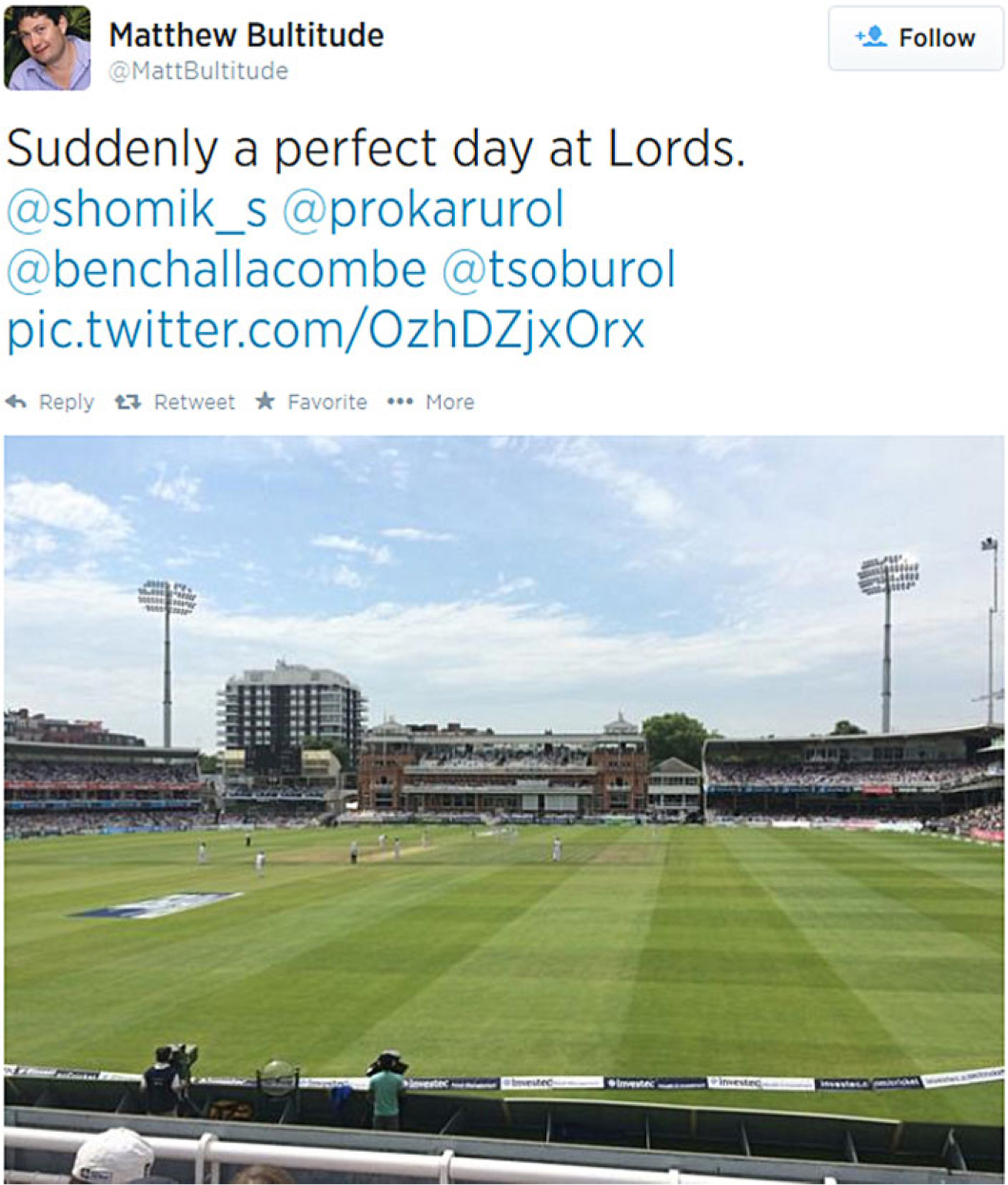 Amidst all the fun and excitement, three important pieces of news are highlighted here:

As the friendliest taxi driver in the world dropped me off outside the vast BT centre in Liverpool he asked “if you’re all in there, what’s going to happen to the rest of us?” I wasn’t sure whether he was envisaging an epidemic of priapism, but I reckoned we’d be ok for a few days.

Inside the specious and well-designed conference centre (below) there was an overwhelmingly positive vibe as old friends caught up, new acquaintances were made and a packed scientific program rolled out.

Of course there was really too much to be able to capture all the highlights but here are some of the headlines.

Chris Harding highlighted that female bladder outlet obstruction (BOO) is more common than we think and Tamsin Greenwell talked about the management of female urethral strictures.

Taking control of the men

Urologists need to feature more prominently in infertility clinics. It appears that couples are being pushed towards donor sperm prior to discussing their options with a urologist.

Can you find it?

Increasing problems with obesity and the penis – ED, buried penis, sexual dysfunction, and phimosis. Metabolic syndrome and psychological unrest are highly prevalent in this population and should be addressed alongside the andrology. (See the BJUI free Virtual Issue for more on obesity in urology).

ED and LUTS often co-exist to a degree in men of a certain age. Tadalafil has now been licensed for the treatment of both.

On the shoulders of giants…

Mark Soloway gave a fantastic talk in the Perspectives of Oncology session that had a very original Beatles theme this year. He reflected on his career and paid homage to many of the people who have contributed to the modern management of bladder cancer, without whom we wouldn’t have BCG, cisplatin, mitomycin, fibreoptics….

The surgeon is the most important factor

Chris Pobert introduced the Odoreader™. It all began with the discovery that dogs could sniff out melanoma, and subsequently TCC! The Odoreader™ uses a small sample of urine to produce a trace that represents the composition of gas detected by the sensor.  The trace produced by patients with bladder cancer is different to those without. It has an accuracy of approximately 96%. Will surveillance cystoscopy become a thing of the past?

The location of upper tract TCC does not appear to influence outcomes but tumours in the renal pelvis are picked up later than ureteric tumours. Distal ureterectomy is becoming a popular and safe alternative to nephro-ureterectomy in selected patients.

Metabolic work up for stones should ideally include serum chemistry, stone analysis and 24-hour urine. A third of 24-hour urine samples show variability and so two samples upfront with a possible 3rd prior to intervention increases the accuracy of the test.

Tailored metabolic advice for stone formers can reduce recurrence rates by up to 60%.

What’s in a stone?

Is tamsulosin the new ‘vitamin C’ in stone disease?

There are more alpha-receptors in the obstructed kidney. It appears that tamsulosin is not only effective in increasing the rates of spontaneous stone passage, but also in increasing stone passage rates following laser fragmentation and shock-wave lithotripsy. Get prescribing.

Steve Nakada suggested that we should be measuring stone volume rather than diameter to provide a more accurate measure of stone size and guide management.

How small can you go?

Martin Schonthaler talked about the evolution of the ultra-mini PCNL. Mini-, ultra-mini and micro PCNL work and are safe. The question now is when should we be using these techniques?

You can’t fight your genes

“Cancer is a disease of genomic chaos”. He had a very interesting perspective on focal therapy – if prostate cancer is in your genes, will targeting the single focus of prostate cancer cure you or simply buy time until the rest of the prostate starts to turn malignant?

Is prostate MRI the next Franz Gsellmann world machine?

Gsellmann is an Austrian farmer who over 23 years built a machine made up of hundreds of different parts including a ship’s propeller, two gondolas and 25 motors. When powered up it becomes a spectacle of colour, sound and light but doesn’t actually do anything. Karl Pummer compared MRI of prostate to the world machine –pretty but useless! He argued that the sensitivity of prostate cancer varies hugely from 30-90% and only 31 of the 4687 references matching ‘prostate cancer imaging’ met sufficient criteria to be considered for the German prostate cancer guideline.

Six prostates a day keeps the cancer away

Jay Smith does six prostatectomies in a day. Is this the level all surgeons should be striving for or is it the start of a slippery slope to replacing clinician with technician? Whatever your view, you have to admit it’s pretty impressive! 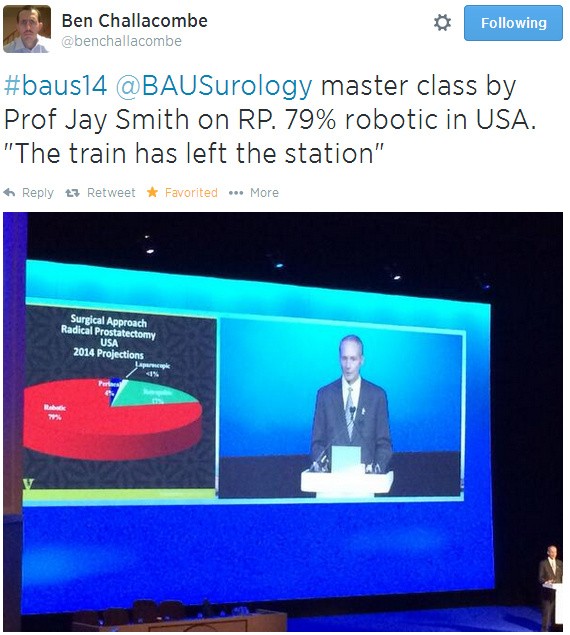 Has the robotic train left the station?

Striking at the source

David Neal suggested that there may be a role for prostatectomy in the context of metastatic prostate cancer because the primary may continue to drive the disease.

Biopsy or not to biopsy?

No, this is not about prostate biopsy! Benign histology remains a challenge in the management of the small renal mass. As biopsy and pathological techniques improve should we be doing more biopsies to help guide decision-making? Steve Nakada certainly made a convincing case for this, which was hotly debated on twitter.

Small renal masses have a good prognosis overall therefore minimizing morbidity should be a priority. Ablative techniques have been shown to be safe technically and oncologically in selected cases.

“Uncontrolled variability is the enemy of progress”

John McGrath used the enhanced recovery program as an example of the enormous variability in practice across UK centres that cannot be explained by case mix alone. This makes it difficult to deliver consistent service and training. We need to develop  protocols that allow us all to sing from the same hymn sheet.

Henry Woo introduced an exciting new CME platform, BJUI Knowledge, in the BJUI International Guest lecture. He also explained that at present there is a gap between user expectations of e-learning (any time, anywhere, any device) and what it can deliver. Follow @BJUIknowledge on Twitter for updates.

How are trainees going to get experience with operations such as vasectomy reversal and microsurgery that are not available on the NHS?

Changing of the guard

After four years of dedicated service to BAUS, Adrian Joyce hands over the baton (aka large shiny necklace) to Mark Speakman. We wish them both the best of luck. 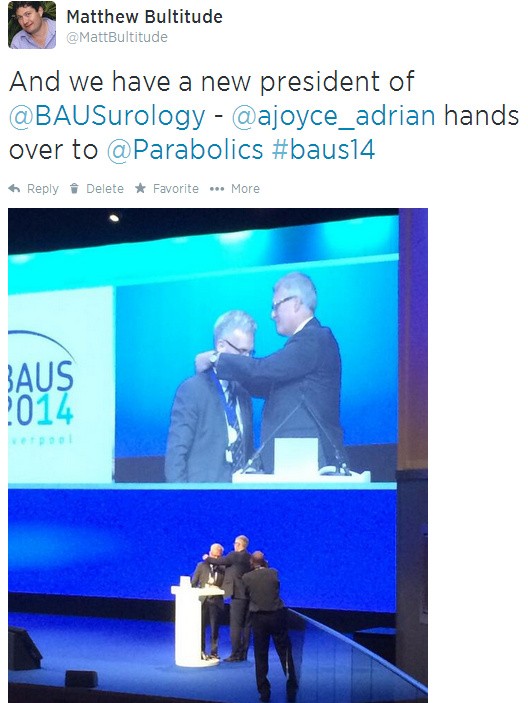 Being a very new addition to the uro-twitterati I was a little sceptical about how twitter would enhance a meeting like BAUS. However, I was impressed by the content and activity that goes on. Congratulations to BAUS for adding twitter screens this year, which kept everyone entertained and up-to-date creating a community feel. I’m definitely a convert!

And the stats agree with me. #BAUS14 analytics at time of posting: 268 participants; 1,363 tweets with 1,209,617 digital impressions. This is a stark improvement on #BAUS13 which attracted only 90 participants with 564 tweets, and one that will surely continue. Tweet away folks! 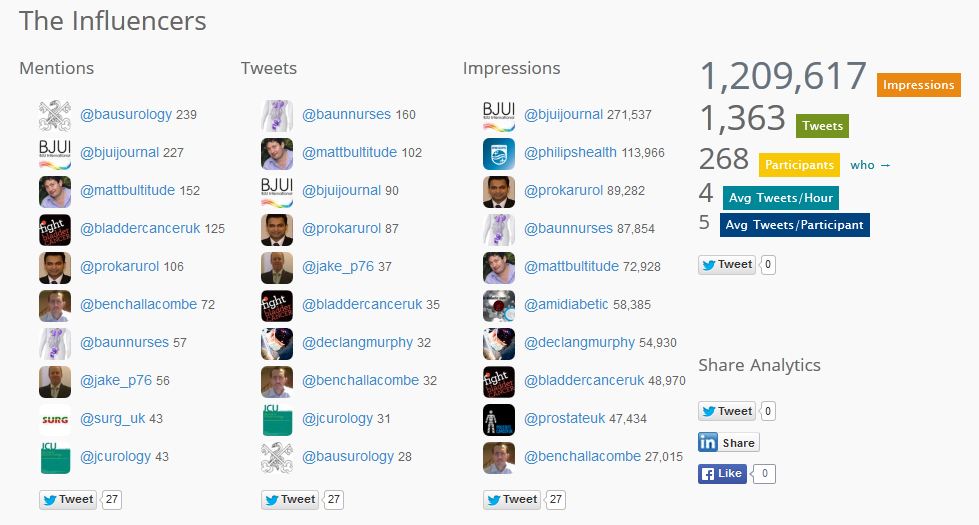 What a fantastic meeting this year with the almost perfect mix of basic science, clinical research, and expert perspectives, topped off with a smidgen of nocturnal merriment. The best of British urology.

I was feeling a little low in energy as I left the Albert Dock on the final day until I got this text – same again next summer? 🙂

Hope to see you all in Manchester!