You are here: Home1 / big picture

If you needed inspiration to pursue cognitive ergonomics as a career or hobby, you could do worse than starting with the book “Set Phasers On Stun” by Steven Casey. Presented as a series of bite-sized real-life vignettes, the book illustrates the inherent fallibility in humans who design and use systems in a very engaging manner. 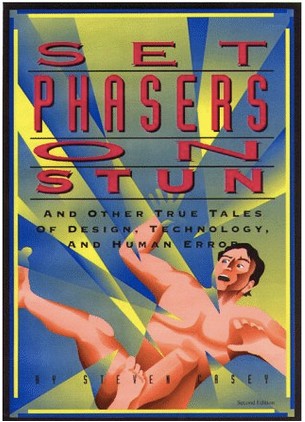 The most relevant story for doctors is the titular tale about a man receiving radiation therapy for a tumour on his shoulder. Ray lay on the treatment table. The tech in the next room attempted to set the machine to an appropriate radiation dose, but accidentally turned it on to full power. She noticed her error, and reset the machine before firing. Unfortunately the software was not sufficiently powerful to acknowledge her rapid typing, and the setting stayed on full. Furthermore, after firing, the screen told the tech there was an error and that no dose had been delivered. She tried twice more, inadvertently dosing Ray each time, unable to hear Ray’s screams from the lead lined treatment room. He only avoided further doses by running away. As Ray died from the treatment over the ensuing weeks, he jokingly told people that “Captain Kirk forgot to put the machine on stun”.

As clinical doctors, we should acknowledge the fact that individually, we do not make that many people better. Disappointing though this is, as it is the Raison d’être for many of us, I think we understand on some level that it is the “Big Picture” people, the Epidemiologists and Public Health physicians that really make the difference. However many cancers I cut out in my career, I’m still likely to make less of a difference than one well in Sub-Saharan Africa. Many of us are prevented from entering the “Big Picture” career paths due to the fact that they are interminably boring. It is much more interesting to counsel and educate patients, and certainly more exciting to perform complex (and at times terrifying) operations than to sit in a small office in the medical school’s worst-funded department crunching numbers. And who is more likely to be invited to appear on Dr. Oz? The Robotic Surgeon? Or the Epidemiologist with meticulously gathered records of malaria rates in South East Asia? The sad truth of the world is that glamour and excitement are usually more revered than self-sacrifice for enduring positive change.

It took a tragedy, and software engineers to solve the problem that killed Ray on the radiation table, but fortunately, there are simpler avenues for clinicians to make a difference beyond the patients they personally treat. This does not necessarily mean being involved in research on expensive new drugs that often have an incremental (or even arguable) benefit over the existing standard. And you don’t have to be Atul Gawande, creating the WHO surgical checklist, but it helps to use his approach. Devoting some time and mental resources to identify problems that affect a large number of people, even if only in a small way adds up to a significant total benefit. This week I was sent a review article on inadvertent diathermy injuries. These are uncommon, but can be debilitating, as in the index case where a patient essentially lost the use of his right hand due to thermal injury-induced tendon contractures. A consistent problem was a loss of contact between skin and earthing plate. Sweat and traction can loosen the plate and result in occult burns, particularly during prolonged cases, or emergency cases where the plate was applied in a rush. Maybe another surgical check should be done at four, or six hours into an operation to assess the need for a second antibiotic dose, and check diathermy plate. If the case is taking significantly longer than expected, should we take the opportunity to ask; “Why is this taking so long? Do I need help, or a second opinion here?”

The electronic age has given us unprecedented opportunity to reach patients with quality information on the nature of their disease, what to expect from their surgery, and advice on when to seek urgent help. In many cases it just takes a person to assume responsibility for writing content for a web page. The more quality health content we write, the more we drown out the snake-oil merchants and charlatans that prey on credulous patients.

My challenge to you in the coming week is to devote some time to thinking of a “Big Picture” issue that could benefit more patients than those you see yourself, or alternatively dig a well in Africa.