You are here: Home1 / extranodal extension 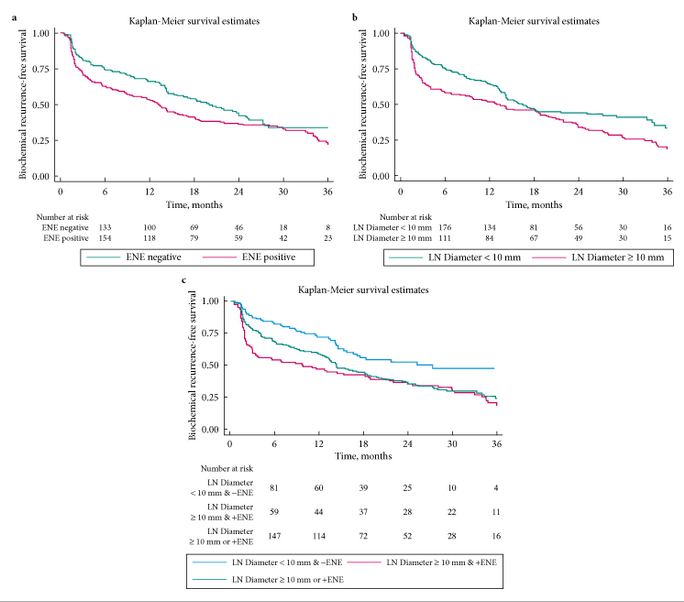 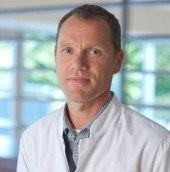 The role of prostatectomy in lymph node metastasized prostate cancer has been subject to changing opinions. Classically, a nodal dissection was performed as the initial step in the procedure and prostatectomy was avoided in men with cryosection-proven metastases. Biochemical recurrence during the first 3 years occurs in the majority of men with pN1 disease [1]. Early data from randomized trials shows only a 50% prostate cancer-specific survival 12 years after prostatectomy and nodal metastases without immediate adjuvant treatment [2]. Recently, Passoni et al. [3] showed a higher 10-year overall survival of 82.8% in men with nodal metastases, of whom the majority were treated with adjuvant androgen ablation and/or radiotherapy. This percentage is remarkably similar to the treatment arm of the earlier-mentioned study reported by Messing et al. [2], which showed a 10-year disease-specific survival of >80%. At 10 years about half the patients who died, did so from prostate cancer; therefore, although reasonable intermediate range survival can be obtained in men with nodal metastases of prostate cancer, the major cause of death remains prostate cancer when surgery is applied at the age of 65 years. Although adjuvant androgen ablation may improve survival, as suggested by the above-mentioned observations, some men may not experience recurrence after resection of nodal metastases and would experience the toxicity of androgen ablation unnecessarily. The identification of these men would reduce costs and toxicity.

Passoni et al. [3] presented a multicentre study on prognostic factors after prostatectomy for node-positive disease. The number of removed nodes (median 10) seems relatively low compared with the 17 reported in their earlier single-centre study, but may be a good reflection of urological practice in general. By comparison, the percentage of men who underwent adjuvant radiotherapy in the multicentre study was low (16%). Data from da Pozzo et al. [4] suggest that adjuvant radiotherapy may be of benefit in men with limited nodal metastases. It would be of interest to study whether men with a later biochemical recurrence would be those that did experience recurrence only locally and therefore would be those most likely to benefit from adjuvant (or salvage) radiotherapy.

In the current study by Passoni et al. [1] in the BJUI, the follow-up was relatively short (16 months). Earlier data from this author group showed that number of positive nodes and lymph node density were good predictors of cancer-specific survival after prostatectomy. This earlier observation is now confirmed in a multicentre analysis with a different endpoint: biochemical recurrence. What is notable is the fact that this confirmation was obtained in a series of patients with fewer nodes removed. The value of the marker ≤2 positive nodes becomes limited with the observation that this group contained 85% of men in their series. The second marker found, the size of the node, showed a more general distribution but as a single marker had no predictive value. The differences in Harrel’s c values from the base model containing other clinical characteristics are limited and reproducibility of measures needs attention. Still, the observation that extent of nodal metastases is of prognostic value after surgery is notable.

Ideally, markers could predict the absence of further disease progression in men after prostatectomy for nodal metastasized prostate cancer. None of the studied characteristics fulfill this need because at 36 months after prostatectomy the majority of men, even those in the best prognostic group, do experience biochemical recurrence that will result in prostate cancer-related death. Gleason score is a strong predictor of the presence of nodal metastases [5], and some have suggested that nodal Gleason grade is of prognostic value in men with pN+ disease. Until these markers have been further evaluated, it remains important to address the fact that reported cancer-specific survival in most men with pN+ disease is >10 years [6]. Although tempting to speculate that prostatectomy and (extended) lymph node dissection plays a role in this, the almost inevitable development of biochemical recurrence reported in the current study by Passoni et al. [1], even in patients in the best prognostic group, stresses the systemic nature of this disease which will require a multimodality approach in most men at some point.