The investigation followed the best principles of human factors theory and causal analysis. It was not looking to assign blame but instead to constructively implement better process and systems that do not relay solely on one individual, as humans are notoriously fallible. The outcome of any investigation is to make it easier for medical teams and administrators to perform well and to mitigate the risk of errors, in an inherently complex area such as medicine.

Only a small number of HSIB investigations have taken place so far so we are fortunate that a Urology case was chosen. The report concentrated on the community aspects of the testicular pain pathway, and the investigating team had fruitful meetings with NHS 111 that led to changes in the questions and prompts that were asked of callers with testicular pain who dialled in. The Royal College of GPs, as a result of the investigation, has convened a group to review the communication standards between practices running telephone services and emergency departments; and NICE has agreed to improve the on-line guidance on testicular torsion and scrotal pain to make it more accessible to clinicians, patients and their carers.

The fact that this came about after an investigation of a single case shows the power of this investigative process and the rigour with which it was carried out. 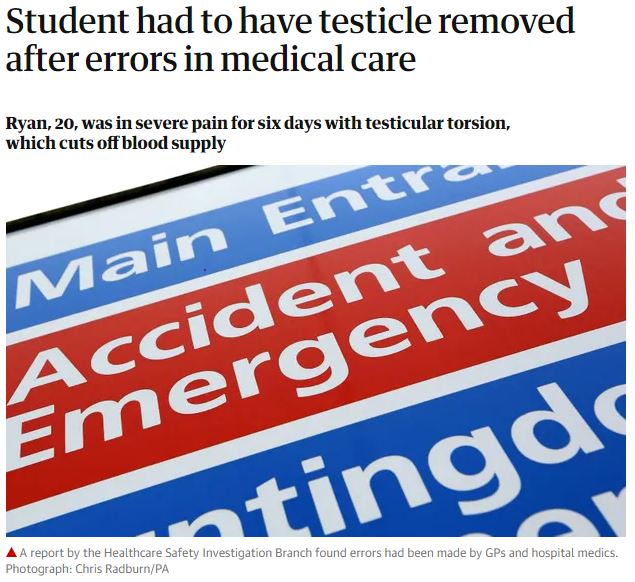 I would encourage others who may want to be involved with this type of work. I was lucky enough to be approached by the HSIB to be the subject matter expert (SME) on this case as I have a known interest in both Quality Improvement (QI) and Torsion. Anyone approached to help with investigations of this type should be reassured of the professionalism under which a case is undertaken: no individuals or organisations are named; no fingers are pointed but instead the HSIB are able to open a lot of doors and instigate change by negotiating agreements from departments and institutions that most clinicians involved in QI could only dream of getting.

Maybe we need a few more investigations of this type in Urology; retained stents spring immediately to mind as a strong candidate as the HSIB is also experienced in talking to industry. Wouldn’t retained stents be so much easier to avoid if each stent had an individualised barcode that could be scanned and tracked? The companies making stents could perhaps be encouraged to be more involved in making sure that they were easier to track across the whole of the UK (or the world) so patients wouldn’t have so many problems with stents in the future.  Every component of a jet is tracked in a similar way so why shouldn’t we look for the same standard in Urology Healthcare!

James S. A. Green is a Urological Surgeon, Network Lead for Urology at Barts Health NHS Trust, Quality Improvement Director at Whipps Cross University Hospital and visiting Professor in Health Services Research at Kings College, London. His interest in medical education and improvement started when developing medical support for the British Army and he has published extensively on team-working and improving clinical care. He was SME for the HSIB investigation into a case of delayed testicular torsion.

Mr Tony Tien MRCS is a clinical fellow in Urology at Whipps Cross Hospital and a champion for Quality Improvement.