You are here: Home1 / Janice Cheng 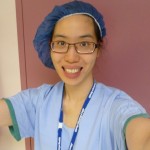 This year’s final #urojc concluded with intense discussions on the role of local treatment (LT) in metastatic prostate cancer. One study author, @mbwilliams95 joined the conversation to provide valuable insights.

Despite the fact only a small number of Stage IV patients had LT between 2004-2010 (post docetaxel era), this population based study revealed statistically significant differences between overall survival (OS) and disease specific survival (DSS).

So, can this be the start of a paradigm shift?

We may need to question our conventional approach.

Although some would consider performing RP in this population, 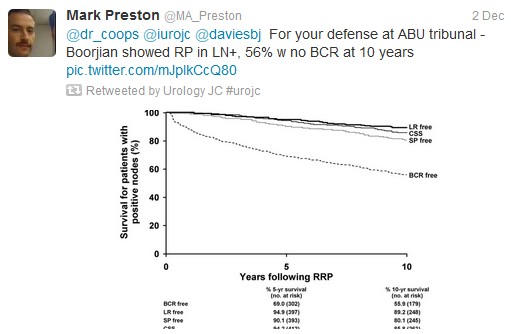 Tzelepi et al (J Clin Oncol 2011 Jun 20;29(18):2574-81) suggested that potentially lethal cancers persist in the primary tumor and may contribute to progression. This is a possible explanation for this study’s findings, which echoed earlier results by Swanson et al (J Urol. 2006 Oct;176: 1292-8) and Shao et al (Eur Urol 2013 May 21. [Epub ahead of print]). However, SEER lacks information regarding the extent of bony metastasis, an entity that undoubtedly influences patient survival. Furthermore, patients treated with RP were 10 yrs younger than the NSR group (62 vs 72), and had a higher proportion of those with PSA <20.

To reduce bias produced by significant comorbidities, authors excluded those dying within a year of diagnosis and found the 5-yr OS continued to be higher in patients undergoing RP (76.5%) or BT (58.2%). However, patients with three or more of: age ≥70 yr, cT4 disease, PSA ≥20 ng/ml, high-grade disease, and pelvic lymphadenopathy had a 5-yr OS survival (38.2%) and a DSS probability (50.1%) similar to NSR patients.

Several contributors identified that Will Rogers phenomenon may be at play

Ultimately, the jury is still out on what is the most effective treatment of significant prostate cancer

Studies (in addition to the follow-on cohort study arising from this review), are underway

To conclude, it has been

In spite of the global participation, much of the banter involved our US urological colleagues.  On this basis, the Best Tweet Prize has been awarded to a provocative tweet from our UK colleague Ben Challacombe (@benchallacombe).

Thank you to European Urology (@EUPlatinum) for allow open access to the article discussed this month.  Thank you to Nature Reviews Urology for supporting the Best Tweet prize, which is a complimentary 12 months on-line subscription to the journal.

We look forward to seeing you at the January #urojc.

Dr Janice Cheng is an Australian Urology Trainee, currently based at Western Hospital. She has an interest in teaching, and enjoys laparoscopies, endoscopies, as well as male/female incontinence management. Twitter @JustUro