You are here: Home1 / margins 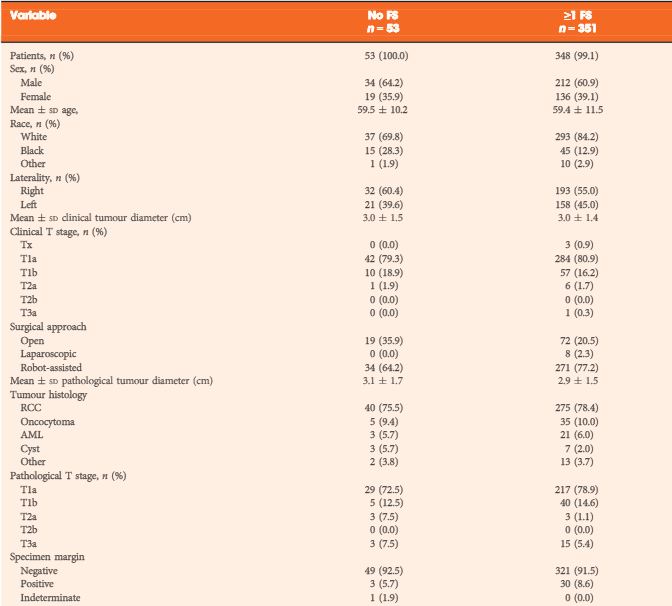 Frozen Section During Partial Nephrectomy: Does it Predict Positive Margins?

To investigate the clinical utility of frozen section (FS) analysis performed during partial nephrectomy (PN) and its influence on intra-operative management.

A total of 576 intra-operative FSs were performed in 351 cases to assess the PN tumour bed margin, 19 (5.4%) of which also had a mass sent for FS to assess the tumour type. The concordance rate between the FS diagnosis and the FS control diagnosis was 98.3%. There were 30 (8.5%) final positive specimen margins, of which four (13.3%) were classified as atypia, 17 (56.7%) as negative and nine (30%) as positive on FS diagnosis. Intra-operative management was influenced in six of nine cases with a positive FS diagnosis and in one of nine cases with an FS diagnosis of atypia.

The relatively high false-negative rate, controversy over the prognosis of a positive margin, and inconsistency in influencing intra-operative management are arguments against the routine use of FS in PN cases.

A core goal of oncological surgery is complete removal of the neoplastic mass. Conventional wisdom with regards to partial nephrectomy (PN) is that a minimal tumour-free margin is sufficient to achieve adequate cancer clearance, minimises loss of normal renal parenchyma and avoids local tumour recurrence [1]. Does this maximisation of nephron preservation and reported positive surgical margin rates after PN ranging from 0% to 7% [2] make intraoperative frozen sections a prerequisite? The results of the paper by Gordetsky et al. [3] in this month’s issue of BJU International suggest that frozen section results from the tumour bed of patients undergoing a PN may be both unreliable and result in subsequent inconsistent management decisions by the operating surgeon.

A recent survey of 197 American urologists revealed that up to 69% (‘always’ or ‘sometimes’) undertake a frozen section during PN [4]. In view of such high penetrance of this test with a resulting high workload for the uro-pathologist, it is critical that the test is reliable and the results are positively and consistently acted upon by the operating urologist.

Gordetsky et al. [3] present interesting data from an expert uro-pathology service, on a consecutive cohort of patients undergoing PN. Reassuringly the pathologist’s skill at making the correct call on the frozen-section specimen was extremely high with a 98% concordance between the actual frozen section and the subsequently created formalin-fixed paraffin-embedded tissue block from the very same piece of tissue. However, despite this high level of accuracy, the sensitivity of the tumour bed frozen section in predicting the actual presence of a positive surgical margin in the resected tumour was only 30% (in other words, of all the patients who actually had positive surgical margins only 30% were identified by frozen section analysis of the tumour bed). As tumour bed biopsies only represent a small fraction of the resection margin this is perhaps unsurprising.

The second issue addressed by Gordetsky et al. [3] is the matter of an inconsistent response of the surgeon to a positive frozen section. In five cases no action was taken, in three cases the tumour bed was re-resected and in a single case a subsequent radical nephrectomy was performed. These results can be compared with those of Sidana et al. [4], where there was a similar inconsistency of management strategies. This inconsistency can be explained by the controversy surrounding the oncological importance of a positive surgical. There is evidence that a positive margin may be associated with an increased risk of recurrence; however, it does not appear to infer a poorer long-term oncological outcome for the patient [5]. It is intriguing that at the time of a completion nephrectomy following a positive surgical margin, residual malignant cells were not found in any of the patients who underwent a re-resection or nephrectomy in this and other studies [3, 6]. It should, however, be noted that published series of conservative management of positive margins are few with only medium-term follow-up. As we know that the natural history of the small renal mass is one of slow growth, any microscopic residual disease may take several years to become clinically apparent and these studies are therefore underpowered.

We think there are several practical arguments against routine use of frozen section. Whilst waiting for the frozen section result some surgeons have been known to keep the kidney ischaemic (16%) resulting in consequent loss of renal function [4]. To avoid this many urologists will undertake the renorrhaphy whilst waiting for the result, a practice becoming increasingly more common with the move towards laparoscopic and robot-assisted PN, where tumour extraction is usually the final step. This practice inevitably influences the subsequent enthusiasm of the surgeon to go back and perform a re-resection and re-do renorrhaphy. It is known that the surgeons’ gross interpretation of the surgical margin approaches the sensitivity of the permanent section and has low false-negative rates, apparently superior to tumour bed frozen section [7]. Routine cautery of the resection bed may also provide an additional safety margin and render any microscopic positive margin clinically insignificant.

It is our opinion that this work by Gordetsky et al. [3] adds credence to the stand that there is no need for a routine tumour bed frozen section in PN and that careful examination of the resected tumour with selected frozen section analysis of suspicious areas is a safe strategy, saves time and provides adequate information for intraoperative decision making.