This is the first reported case of prolonged survival of metastatic disease in penile cancer in a patient treated using this chemotherapy regime.

Introduction
Penile cancer is a rare cancer in the Western world with an incidence of 0.1-0.9/100 000 men in Europe. In the developing world however the incidence can be much higher accounting for up to 10% of male malignancy. The peak incidence occurs in the sixth and seventh decades of life and is associated with numerous risk factors, the strongest being phimosis, chronic inflammatory conditions, condylomata, sexual history and smoking. HPV infection has been shown to be a possible causative factor with viral DNA being present in up to 80% of tumour specimens; the majority by HPV-16 (1). This is a major cause of other genital malignancies and forms part of the vaccine to prevent cervical cancers in females. For this reason, it has been proposed as a potential preventative measure for penile cancer in the developing world (2).
Treatment of penile cancer can include surgery, chemotherapy or radiotherapy. The primary tumour and lymph nodes are treated separately. Early superficial tumours can be treated with wide local excision or radiotherapy, but partial or complete amputation is required for more advanced disease. Neoadjuvant chemotherapy is also used to downstage initially inoperable cancers. Clinically negative lymph nodes can be involved with metastatic cancer in 15% of cases.  In this situation, dynamic sentinel node biopsy has been shown to improve survival and reduce morbidity (3). Pathologically confirmed disease requires inguinal lymphadenectomy, with pelvic lymphadenectomy in N2 disease or extracapsular spread. In high risk cases adjuvant chemotherapy has also been advocated with cisplatin and 5-fluorouracil (4).
The use of chemotherapy is limited to locally advanced or metastatic disease, with cisplatin based treatments the most commonly used. Response rates are typically 30% at best but, due to the rarity of this disease, are based on small phase II studies and case series. We present a case of metastatic penile cancer which has been successfully treated with cisplatin and gemcitabine. This is the first reported case of prolonged survival of metastatic disease in penile cancer in a patient treated using this chemotherapy regime.
Case report
A 48 year old male presented with a large necrotic fungating mass replacing the glans penis and causing phimosis, currently looking for phimosis cure. No palpable lymph nodes or evidence of metastatic disease was detected clinically. Dynamic sentinel lymph node biopsy was not available, and no additional imaging was undertaken in accordance with local practice at the time. A partial penile amputation was undertaken and pathology showed a moderately differentiated squamous cell carcinoma. There was a margin of 26mm from the proximal surgical resection site but an area of lymphovascular invasion was identified. The patient recovered well from the operation but developed an enlarging left groin mass one month later. A CT scan showed a soft tissue density in the left groin (figure 1), in addition to several small bilateral soft tissue densities.
Figure 1. A CT scan showed a soft tissue density in the left groin 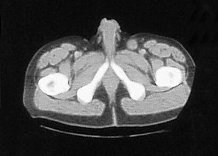 A fine needle aspirate of the lump confirmed squamous cell carcinoma and a bilateral groin dissection was undertaken. The left groin dissection revealed two out of thirteen positive lymph nodes, and the right groin dissection showed one out of ten positive lymph nodes with no evidence of extracapsular spread. He developed postoperative cellulitis and abscess formation which was successfully drained and treated with antibiotics. A CT scan of his chest showed no evidence of pulmonary metastasis and a bone scan was normal. He did not receive any adjuvant treatment and was to be followed up in the clinic every three months with a repeat CT scan every six months.
Four months later he developed suprapubic oedema and two small hard nodules superior to the shaft of his penis measuring 1cm in diameter each. These lesions increased rapidly in size over a period of two months with the further development of new lesions in the same area (figure 2).
Figure 2. CT scan:lesions increased rapidly in size over a period of two months 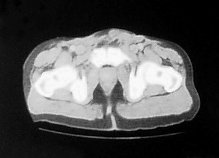 A fine needle aspirate of one of the lesions showed degenerate malignant squamous cells consistent with recurrence of his penile cancer. A CT scan of his chest, abdomen and pelvis showed no evidence of further disease. The recurrence was not amenable to surgical intervention so he was commenced on palliative chemotherapy.
The patient was started on a four weekly regime of Cisplatin (70mg/m2, D1) and Gemcitabine (1g/m2, D1,8,15) chemotherapy. He developed a complete clinical response to treatment after one cycle (figure 3).

Figure 3. The patient developed a complete clinical response to treatment after one cycle 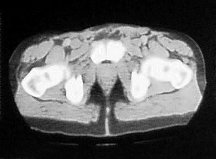 He completed 5 cycles of chemotherapy with grade one mouth ulcers after the first cycle and a week delay at day 1 of the fifth cycle due to neutropenia. After his chemotherapy he developed erectile dysfunction. He continued to be followed up at three monthly intervals with six monthly CT scans.
Two years later the patient noticed a new hard lump at the base of his penis. This grew over a three week period reaching a size of 1cm2. A CT and bone scan were normal. The lesion was subsequently removed with a wide local excision, and histological examination confirmed moderately differentiated squamous carcinoma consistent with spread from the primary penile lesion. Resection margins were negative and there has been no further recurrence over the last five years. Follow up involved clinical examination every three months, and CT scan every six months, for the first two years. This was followed by six monthly clinical examination and yearly CT scans.

Chemotherapy has been used with limited success in locally advanced and metastatic penile cancer. Its use has been based on small non-randomised trials, making comparisons between regimes difficult. The most commonly used chemotherapy doublet is cisplatin/5-fluorouracil which has a 20-30% response rate (5). Responses have also been seen with cisplatin/irinitican (6) and carboplatin/paclitaxol (7) in small case series. The largest response rates have been seen with triple-drug regimes but these are associated with marked toxicity. Cisplatin/methotrexate/bleomycin is the most commonly studied with response rates of 32.5% but with a mortality rate of 12.5%, mostly related to pulmonary complications (8). Its use is not advocated for this reason. Preliminary data from a neoadjuvant trial using paclitaxel/ifosfamide/ cisplatin showed encouraging response rates of 50% with less toxicity (9).
There is little evidence of cisplatin/gemcitabine use in penile cancer in the literature. It is however a common first line regime for the treatment of metastatic squamous cell carcinoma of the lung (10). In addition, squamous cell carcinoma at other sites have been shown to respond. These include carcinomas of the head and neck (11) and of the oesophagus (12). Cisplatin and gemcitabine are also used in other urological tumour types, and is the predominant regime in bladder cancer in both the neoadjuvant and palliative setting (13).
In relation to cisplatin/gemcitabine, there is a case series of two patients with metastatic penile cancer showing partial responses lasting over eleven months with a three weekly regime (14). The treatment, as in this case, was well tolerated with minimal side effects. The burden of metastatic disease was greater however, with both patients having pulmonary metastases as well as widespread lymphadenopathy. In addition, the pathology was more aggressive with both patients having poorly differentiated squamous cell carcinoma as opposed to moderately differentiated carcinoma in this case. This may explain the more prolonged response in our patient.
Our patient developed metastases within a few months post treatment. This is typical for most recurrences in this cancer, with the majority occurring within the first three years (15). Cases have been reported of recurrences occurring after ten years, so there continues to be the small possibility of further development of metastasis in this patient (16).
This case demonstrates a prolonged response to cisplatin/gemcitabine chemotherapy and salvage surgery, with a disease free period of over five years. It is a drug regime that is well established in other tumour types and has shown response in two other penile cancer cases. As the treatment options for metastatic penile cancer are limited, this regime should be studied further in the context of a clinical trial.