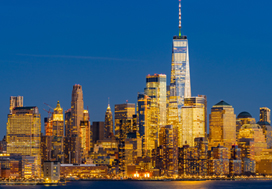 The Article of the Month for March 2020 – Guideline of guidelines: social media in urology – was written by Drs Stacy Loeb and Jacob Taylor, who are based in New York City. The cover features the Manhattan skyline as seen from New Jersey, famous for its skyscrapers, which have been built there on bedrock left over from the last ice age at ever-increasing heights since the 1890s, and the song by Norwegian band A-ha. The skyline was dominated by the 1930s-built Empire State and Chrysler buildings until the 1970s when the World Trade Center was completed. The new One World Trade Center is now the tallest building in the city at 1776 feet (541 m) but since the 2000s nine towers over 1000 feet have been built with 16 more being planned. This is partly fuelled by a desire for high city living but also by technological advances meaning thinner bases can be used to support the structures. 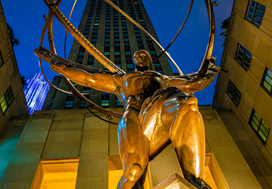 The cover image shows the statue of Atlas located within the Rockefeller Center. This “city within a city” was conceived by John D. Rockefeller Jr. and was built during the 1930s, providing valuable jobs during the Great Depression. The first buildings were opened in 1933 providing a center of art, style and entertainment.

The statue of Atlas – a half man/half god giant from Greek mythology – was built in 1937 by Lee Laurie and Rene Paul Chambellan. It is 45 feet (14 metres) tall and weighs 7 tonnes.