You are here: Home1 / Osseous metaplasia

Case report
A 40-year old male consulted our centre for assessment of a 10-year history of repeated dysuria and urinary stream thinning. He had received prior urethral dilatation treatment. He suffered from gonococcal urethritis 20 years ago, which had been managed with medical treatment for 1 month (he could not remember in detail). Physical examination found palpable hard stenosis in the penile urethra. The results of urine culture were negative. Gonococcus smear in urethral secretions was negative. Tuberculosis was also excluded by purified protein derivative test (PPD), urine polymerase chain reaction (PCR) and serum anti-tuberculosis antibody detection. Pelvic X ray radiography and voiding cystourethrography demonstrated an anterior urethra stricture and half-arc shaped high density image (Figure 1). The clinical diagnosis of urethral stricture with calculus formation was made. Endourethral treatment with a ureteroscope attempting to push the calculus back into the bladder failed, because the ureteroscope could not pass through and there was no obvious stone inside the urethral lumen. Segmental resection of the urethral stricture and end to end anastomosis were performed. During the operation, a bone-like mass was palpated within the urethra, which was impacted and closely connected with the urethral mucosa (Figure 2). The length of stricture segment was about 2 cm. Postoperative pathologic examination revealed multiple submucosal focal deposits of calcium salts with osseous metaplasia (Figure 3 A and B ). Alizarin red staining indicated extensive calcium nodules and ossification (Fig3 C and D). After indwelling catheterisation for 2 weeks, the patient urinated satisfactorily and had no other problems at 6 month follow-up. 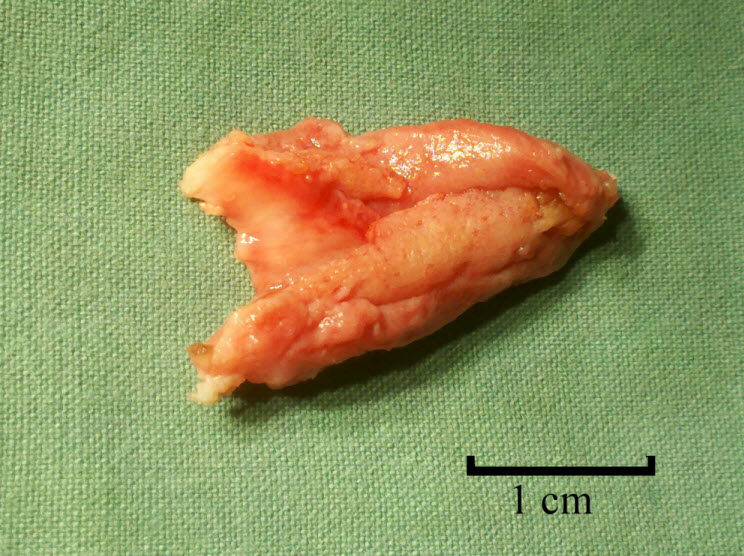 Figure 2
Gross specimen of urethral stenosis. A 2.0 by 0.5 by 0.5-cm hard-texture cylindrical mass mixed with urethral mucus and bone like structure. 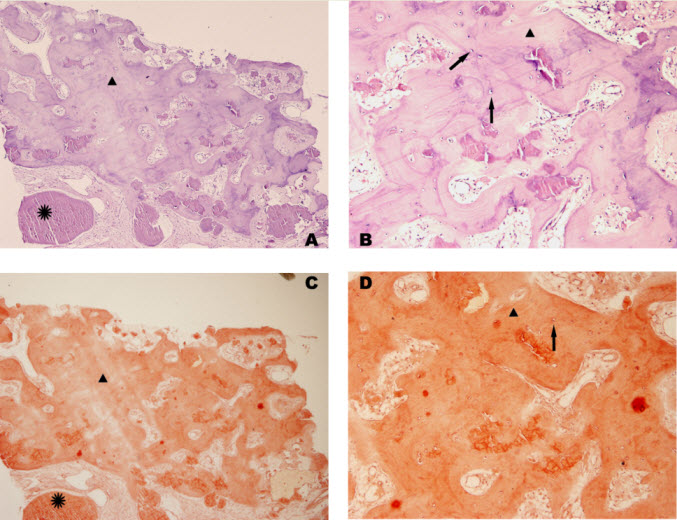 We report a case of a  fat containing renal mass, which was suggestive of angiomyolipoma and percutaneous ablation was initially considered.

Abstract
We report a case of a  fat containing renal mass, which was suggestive of angiomyolipoma and percutaneous ablation was initially considered.  The presence of tiny calcifications made us reconsider our differential diagnosis; a robotic partial nephrectomy revealed a clear cell renal cell carcinoma.
Introduction
It is widely accepted that evidence of macroscopic fat within a renal mass on CT is suggestive of angiomyolipoma (1).  We describe a case where a 5cm fat-containing renal tumour was consistent with an angiomyolipoma and percutaneous ablation was initially recommended. Tiny areas of intratumoral calcification made us reconsider our management.  A robotic partial nephrectomy was carried out, which revealed a clear cell renal cell carcinoma with osseous metaplasia. Despite the current consensus that angiomyolipomas over 4cm should be considered for percutaneous ablation (2) , this case shows that when there is diagnostic uncertainty, surgical excision should be considered as first line management.
Case Report
53 year old mechanical engineer presented as a general surgical patient with left sided abdominal pain.  He underwent an ultrasound scan, with the incidental finding of a well defined heterogeneous solid mass in the upper pole of the right kidney.
A contrast CT scan confirmed a 5cm solid mass arising from the upper pole of the right kidney, separate from the adrenal gland.  The lesion contained multiple hypoattenuating foci suggestive of macroscopic fat and a small amount of intratumoral calcification was shown (Figure 1).
Figure 1 Axial (Figure 1a), coronal (Figure 1b) CT images with IV contrast enhancement, showing a right renal mass with multiple foci of fat.  Intratumoral microcalcifications are present.

The images were highly suggestive of an angiomyolipoma (AML) and since the lesion was bigger than 4cm, percutaneous ablation was initially recommended.  However, the presence of a tiny amount of calcification visible within the tumour raised the possibility of a renal cell carcinoma (RCC).
A robotic right partial nephrectomy was carried out.  Pathological examination revealed solid architecture with areas of metaplastic bone and adipose tissue associated with haemorrhage and degenerative changes with the tumour (Figure 2).
Figure 2. Photomicrograph of surgical specimen (haematoxylin eosin stain; original magnification: x100). Clear cell renal cell carcinoma with foci of metaplastic bone and adipose tissue.

The features were consistent with a clear cell renal cell carcinoma, Fuhrman Grade 3, with clear resection margins.
Discussion
Although it is clear that radiologically detectable fat is strongly associated with angiomyolipoma, there have been exceptions.  In particular, there have been reports of fat-containing RCC’s (3-5).   The engulfing of perinephric fat and cholesterol necrosis misinterpreted as macroscopic fat are the two most common mechanisms of fat deposition within RCC (4).  The third, and rarest mechanism, is osseous metaplasia of the nonepithelial stromal portion of the tumour, with  growth of fatty marrow elements and trabeculae (1,4).  However this usually happens in cases of osseous metaplasia without calcification. Since this case contained calcification, this is unlikely to be the cause of the fat seen in this tumour.
In the reported cases of RCC with osseous metaplasia, the majority have shown some evidence of macroscopic calcification (3,5).  In the present case, there was a tiny amount of calcification.  Since AML only rarely shows evidence of calcification (4), it is clear that RCC should be considered in any fat-containing mass with calcification.
The advancement of percutaneous ablation for AML means it is imperative that the correct provisional diagnosis is made based on imaging.  We suggest that in fat-containing lesions larger than 4 cm where there is uncertainty over the diagnosis of AML,  diagnostic renal mass biopsy or surgical excision, should be considered as first line, invasive management.
References
1. Hélénon O, Merran S, Paraf F, Melki P, Correas JM, Chrétien Y, et al. Unusual fat-containing tumors of the kidney: a diagnostic dilemma. Radiographics. 1997 Feb;17(1):129-144.
2. Kothary N, Soulen MC, Clark TWI, Wein AJ, Shlansky-Goldberg RD, Crino PB, et al. Renal angiomyolipoma: long-term results after arterial embolization. J Vasc Interv Radiol. 2005 Jan;16(1):45-50.
3. Hélénon O, Chrétien Y, Paraf F, Melki P, Denys A, Moreau JF. Renal cell carcinoma containing fat: demonstration with CT. Radiology. 1993 Aug;188(2):429-430.
4. Richmond L, Atri M, Sherman C, Sharir S. Renal cell carcinoma containing macroscopic fat on CT mimics an angiomyolipoma due to bone metaplasia without macroscopic calcification. Br J Radiol. 2010 Aug;83(992):e179-181.
5. Roy C, Tuchmann C, Lindner V, Guth S, Vasilescu C, Saussine C, et al. Renal cell carcinoma with a fatty component mimicking angiomyolipoma on CT. Br J Radiol. 1998 Sep;71(849):977-979.