You are here: Home1 / Sandal Castle 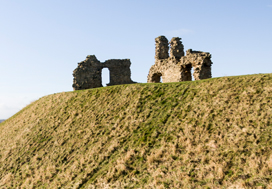 One of the authors of February’s Article of the Month (Understanding volume–outcome relationships in nephrectomy and cystectomy for cancer: evidence from the UK Getting it Right First Time programme) is from Wakefield in Yorkshire, UK.

The cover image shows the moat and ruins of Sandal Castle, which is located in Sandal Magna on the outskirts of Wakefield. The castle was originally built of timber by the 2nd Earl of Surrey, William Warenne, early in the 12th century. In the 13th century, the timber motte-and-bailey castle was rebuilt in stone by a later member of the Warenne family. The castle was maintained until the late 14oos, with the Battle of Wakefield taking place nearby, and a brief resurgence whilst in Royalist hands during the English civil war, but eventually the stone was taken for use in local buildings leaving the ruin you can see today.

There is a good view of the cathedral town of Wakefield, situated on the River Calder, from the hill at Sandal Castle.