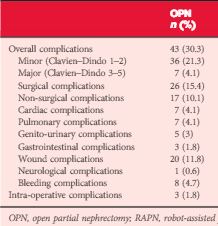 To assess differences in complications after robot-assisted (RAPN) and open partial nephrectomy (OPN) among experienced surgeons.

We identified patients in our institutional review board-approved, prospectively maintained database who underwent OPN or RAPN for management of unifocal, T1a renal tumours at our institution between January 2011 and August 2015. The primary outcome measure was the rate of 30-day overall postoperative complications. Baseline patient factors, tumour characteristics and peri-operative factors, including approach, were evaluated to assess the risk of complications. 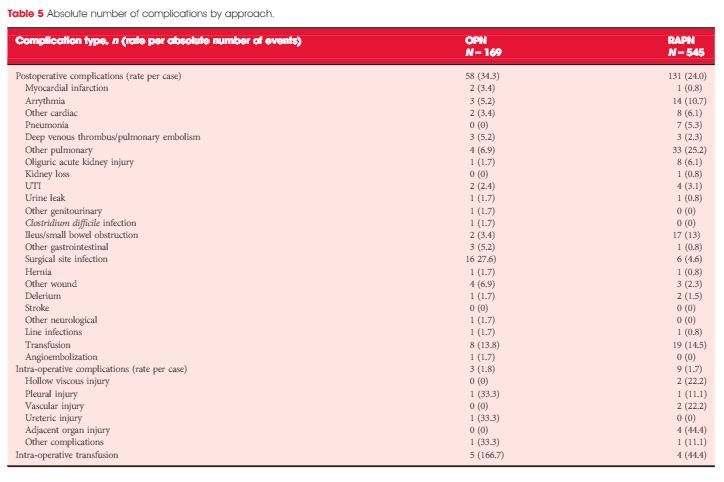 Patients who underwent OPN were found to have a higher rate of overall complications (30.3% vs 18.2%; P = 0.038), with wound complications accounting for the majority of these events (11.8% vs 1.8%; P < 0.001). Multivariable logistic regression analysis showed the open approach to be an independent predictor of overall complications (odds ratio 1.58, 95% confidence interval 1.03–2.43; P = 0.035). Major limitations of the study include its retrospective design and potential lack of generalizability.

The open surgical approach predicts a higher rate of overall complications after partial nephrectomy for unifocal, T1a renal tumours. For experienced surgeons, the morbidity associated with nephron-sparing surgery may be incrementally improved using the robot-assisted approach.

In this issue of BJUI, Ramirez et al. [1] assess the peri-operative outcomes of patients with small renal tumours treated with robot-assisted or open partial nephrectomy [1]. Their study retrospectively compared transperitoneal robot-assisted partial nephrectomy (RAPN) and retroperitoneal open partial nephrectomy (OPN) in a series of 714 patients (545 RAPN and 169 OPN) with cT1a parenchymal tumours of the kidney. Although the RAPN group had a higher mean RENAL nephrometry score, the authors observed a significantly higher overall complication rate in patients in the OPN group (30.3 vs 18.2%; P=0.038). On multivariable analysis, the open approach was an independent predictor of overall complications (odds ratio 1.52; CI 1.03–2.43, P=0.035) besides race, body mass index (BMI) and Charlson comorbidity index. Notably, when complications were stratified by grade, the worse outcome for OPN compared with RAPN was related to minor complications (i.e. Clavien–Dindo 1 and 2) only, with the most relevant difference represented by wound problems. No statistically significant difference between the two approaches was observed with regard to estimated blood loss (EBL) or genitourinary complications. Surprisingly, the RAPN group also had a shorter median warm ischaemia time (WIT; median 22.1 vs 28.6 min).

The authors should be commended for this very interesting comparative study; however, some criticisms should be considered.

First, the authors claim that all procedures were performed by surgeons beyond their learning curve over a period of >4.5 years. Considering the OPN group, the number of procedures/year is <40. If the series was multi-surgeon (the authors do not specify this), then yearly caseload does not meet the standards for defining ‘high’ surgical volume, especially when compared with the RAPN cases (>100/year).

Second, the main complication in the OPN group was wound problems. One has to consider that patients included in this study were mostly overweight to obese, as reflected in the BMI values (median 29.6 kg/m2). This characteristic could have played an important role in the OPN group and may represent a bias.

Third, it seems curious that the same group of authors recently published another comparative study of RAPN vs OPN for ‘completely endophytic tumours’ [2], where the only statistically significant difference between the two approaches was lower EBL and shorter length of stay, in favour of RAPN. Interestingly, no statistically significant difference was reported between two groups with regard to either postoperative complications or WIT.

In 2014, Ficarra et al. [3] compared RAPN and OPN in a multicentre series of 400 cases (200 RAPN and 200 OPN) using a matched-pair analysis [3]. The robot-assisted approach resulted in a lower rate of minor postoperative complications and a lower intra-operative EBL. Notably, in that analysis, the open approach resulted in a shorter WIT despite the fact that 14.5% and 13% of RAPN and OPN patients, respectively, were complex cases (i.e. had cT1b tumours). As pointed out above, in the present study, Ramirez et al. [1] reported a median (interquartile range [IQR]) WIT of 22.1 (17–26) min for the RAPN group and 28.6 (22–35) min for the OPN group [1].

Robot-assisted surgery confers an evident advantage to the surgeon, especially during the renorrhaphy phase as a result of the freedom of movement of the robotic needle driver compared with conventional laparoscopic instruments. It has been shown that the learning curve for RAPN is relatively short, allowing WIT of <20 min to be achieved [4]. In our opinion, the real competitor with regard to RAPN for WIT is OPN. A recent systematic review and meta-analysis based on 16 series showed, in fact, longer WIT for RAPN compared with OPN [5].

Taken together, all these results suggest that OPN maintains its role in the robotic era, especially when complex cases require treatment. Although RAPN is now widespread and has expanded its indications, it is still able to provide excellent performance in terms of postoperative complications at least equal to OPN in tertiary referral centres where a high volume of robotic renal surgery is performed, as indicated by Ramirez et al. [1]; however, several aspects of RAPN still await evaluation. The learning curve for RAPN, in terms of operating time and WIT, has been previously evaluated [4, 6], and the advantages of robotic surgery have been convincingly demonstrated when compared with pure laparoscopy [7]. Despite this, all the studies that have evaluated the learning curve for RAPN involved a tumour size <3 cm. The learning curve for OPN, especially in complex cases, should also be considered. Despite its impressive dissemination, RAPN is still in evolution, and OPN remains alive.