You are here: Home1 / Testicular infaction

We report a case in which a 64-year-old man presented with a painful left hemiscrotum and focal mass in the left testis that mimicked a testicular tumor.

Introduction
Segmental testicular infarction (STI) is an uncommon testicular condition. We report a case in which a 64-year-old man presented with a painful left hemiscrotum and focal mass in the left testis that mimicked a testicular tumor.
Case report
A 64-year-old man with no relevant medical history presented to his general practitioner with acute left hemiscrotal pain and slight swelling of the left epididymis. He was treated with antibiotics for acute epididymitis. One week later, the patient was referred to the urology department because of persistent left sided scrotal pain.
There was no history of trauma and the patient experienced no fever or chills. He had not noted dysuria, hematuria or lower urinary tract symptoms. In the previous few months he had lost 11 kilograms in weight, which according to the patient, was due to his son’s death from melanoma.
Clinically, both testicles were normally positioned. The scrotal skin was devoid of erythema or thickening. The right testicle and epididymis were normal and non tender. The left epididymis was tender to palpation, but not enlarged. A firm non tender mass was palpated deep in the left testis. No pathological supraclavicular lymph nodes, abdominal masses or gynaecomastia were detected.
Ultrasonography revealed a heterogenous hypoechogenic oval shaped lesion in the upper third of the left testis with a size of 9.6mm x 1.8mm, suspicious of a tumor. Color Doppler ultrasound showed an avascular central zone in the lesion (Figure 1).
Figure 1. Color Doppler ultrasound showed an avascular central zone in the lesion
a) 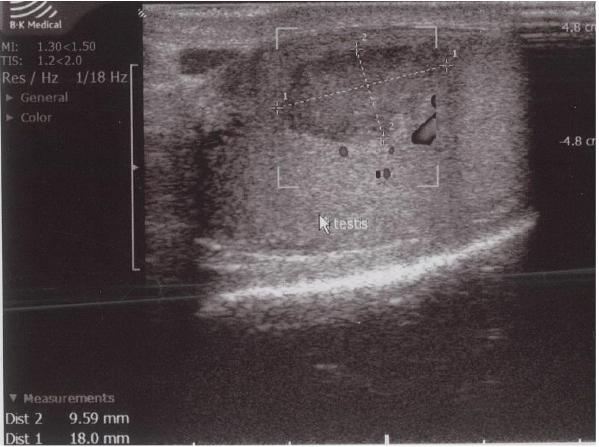 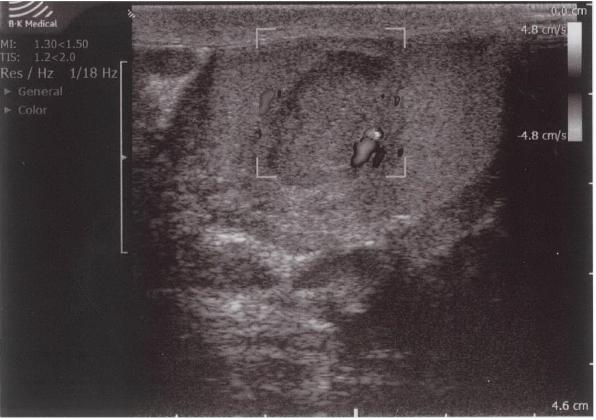 Several hypoechogenic spots were observed, adjacent to the lesion. There were no signs of invasion of the tunica vaginalis. The right testis and both epididymes were normal on ultrasound.
Tumor markers for testicular cancer were within their normal ranges: αFP 3.3 μg/l (normal <7 μg/L), β-HCG <0.10 IU/l (normal: <3 IU/l) and LDH 240 U/l (normal: <248 U/l). The white blood cell count was 7.8.109/l (normal range: 4.0-10.0.109/l), creatinine 67 μmol/l  (normal 64-104 μmol/l), hemoglobin 10.1 mmol/l (normal 8.5-11.0 mmol/l) and hematocrit was 0.46 l/l (normal 0.40-0.50 l/l). Dipstick analysis of the urine was normal. A CT-scan of the chest and abdomen did not reveal any abnormalities.
Based on the clinical picture and ultrasound findings, a testicular tumor was suspected and a left inguinal exploration was performed. Correction of a small left indirect inguinal hernia was performed simultaneously. At exploration, the left testis appeared normal. No decolorization was noticed. A firm mass deep in the parenchyma was palpable. An inguinal orchiectomy was then performed. No complications occured and the patient made an uneventful recovery.
Pathological examination revealed an area of extensive infarction of the seminiferous tubules. In the surrounding testicular tissue no signs of intraepithelial germ cell neoplasia were present (Figure 2).
Figure 2. No signs of intraepithelial germ cell neoplasia present 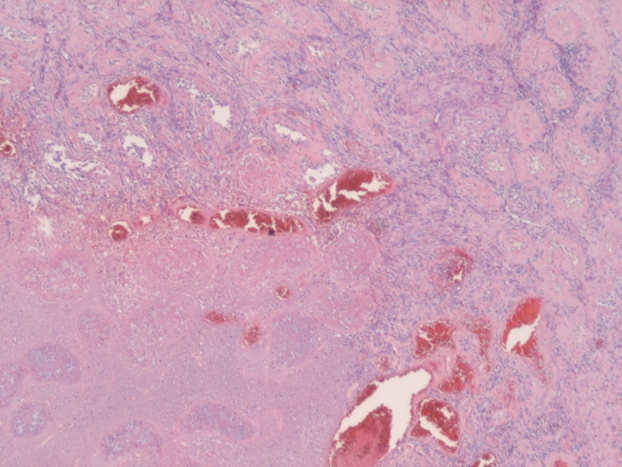