You are here: Home1 / VEILND-OILND editorial

In this interesting prospective study, Kumar and Sethia [1] provide further evidence that video endoscopic inguinal lymphadenectomy (VEIL) could be considered the procedure of choice for most patients with an indication for ILND. In their comparison with historical patients submitted to open ILND (OILND) in a reference centre in the UK, VEIL achieved reduced morbidity, shorter hospital stay, and equivalent oncological control. Also, we must consider that some cases of the VEIL learning curve were included in this study, suggesting that good results can be obtained with the endoscopic technique from its inception.

The idea for an endoscopic approach to ILND was conceived and developed in a cadaveric model by Bishoff et al. [2] in 2003. In 2005, our group reported the first successful experience in humans [3]. In 2006, in collaboration with the Brazilian National Institute of Cancer, we published a landmark study in the Journal of Urology comparing OILND in one limb and VEIL in the contralateral limb in the same patient to minimise comparative bias [4]. In all, 10 patients with impalpable nodes underwent bilateral ILND. We found that morbidity was reduced with VEIL (20% vs 70%) with the removal of the same number of nodes as with OILND [4]. In 2008, we reported on a series of bilateral VEIL obtaining reduced postoperative morbidity and a mean hospital stay of 1 day [5]. Several other small series have reported essentially the same results that we initially described.

Robot-assisted VEIL duplicates the procedure but is more ergonomic, with excellent freedom of movement and amplification of lymphatic visualisation. Matin et al. [6] reported that robot-assisted VEIL could remove the same number of nodes as the open procedure.

The present study [1] reports a large experience comparing bilateral procedures (VEIL and OILND). The follow-up data for OILND are longer but oncological indicators suggest equivalence. This is also the first report of VEIL after node cytology and dynamic sentinel node biopsy with no related adverse events.

To date, a few series have reported long-term oncological results [1, 7] and future studies will be important to evaluate and reproduce the oncological efficacy of VEIL.

We congratulate Kumar and Sethia [1] for these significant data to establish VEIL in the modern urological armamentarium. Indeed, I really have some doubt as whether a randomised controlled study would be necessary considering the accumulated worldwide data on VEIL in the last 10 years.

This year we present at the University of California meeting the promising results of our Latin America collaborative group with 150 VEIL in 110 patients. The mean (range) follow up was 6 (2–10) years, with an overall morbidity of 30% (Clavien–Dindo grade III–IV, 2%), mean lymph node removal of 8 nodes/groin, node positive disease rate of 25%, inguinal recurrence rate of 2%, cancer-specific survival of 90%, and overall survival of 85% (Tobias-Machado et al., 2016, unpublished data). Our data suggest that we can obtain a dramatic reduction in severe complications and also that VEIL is surviving the test of time.

In my opinion, as the reduction in morbidity is already confirmed, we only need larger series with long-term reports of oncological equivalence with OILND to designate VEIL as a ‘gold standard’ in centres with appropriately trained surgeons.

I speculate that in the near future the utilisation of robotic surgery associated with improvements in imaging methods and contrasts, which will improve the identification of lymph nodes to be removed and lymphatic channels to be clipped, will achieve further reductions in morbidity and optimisation of oncological control.

How to Cite this article: 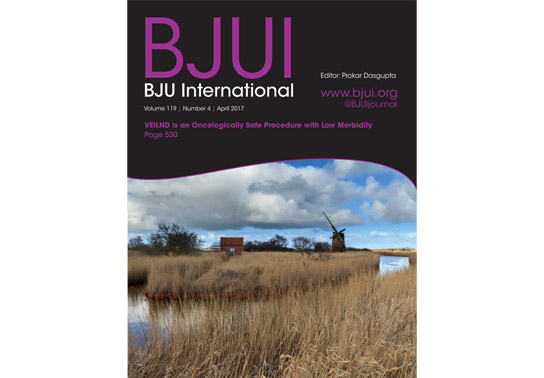 In this issue of BJUI, Kumar and Sethia report their experience of laparoscopic inguinal node dissection for patients with penile cancer [1]. The authors should be congratulated for what is a technically and feasibly difficult study to complete.

The step-wise spread of penile carcinoma first to the inguinal lymph nodes is well known. It is also recognized that accurate staging and treatment of inguinal metastases play a crucial part in a patient’s management pathway. Furthermore, evidence points to a survival advantage for those who undergo prophylactic inguinal lymph node dissection (ILND) and have positive nodes, compared with those treated with surveillance and delayed dissection when nodes become palpable or radiologically positive.

Adoption of dynamic sentinel node biopsy has reduced the absolute number of prophylactic ILNDs, but in any high-volume unit (as is the case in the UK supra-network centres), a large number of inguinal node dissections will still be undertaken [4].

For these reasons it is desirable to minimize or modify the inguinal wound to reduce the complication rate, and the use of minimally invasive techniques has gradually progressed over the last 10 years.

The first case series reporting the use of laparoscopic node dissection (videoendoscopic inguinal node dissection [VEILND]) described 10 patients who underwent bilateral ILND using standard lymphadenectomy on one side and the VEILND technique on the contralateral side [5]. A more recent development has been the incorporation of robotic assistance as an enabling tool for performing ILND [6].

In these small series the technique appeared to be safe and oncologically comparable to open surgery, but the numbers were too small to give a meaningful assessment of complications. It is therefore welcome to read a paper on a high-volume unit’s experience of VEILND.

The authors describe their experience of VEILND on a sequential prospective group of patients and compared them with a historical control cohort who underwent open inguinal node dissection. The data appear to show a significant difference in length of stay and wound-related comorbidity in favour of the minimally invasive approach without compromising oncological outcome. Interestingly, the rate of lower limb lymphedema was also significantly reduced in the VEILND group.

The headline data are impressive but the comparison does have a number of potential weaknesses. Firstly, the rate of wound-related complications is quite high in the open group, with 23% of patients needing re-exploration or debridement and 37% some form of drainage of collection. The choice of incision position, length and preparation of skin flaps can influence the rate of wound breakdown and length of stay.

Secondly, the headline 6% complication rate for VEILND does not include the 27% lymphocoele rate which is still a troublesome complication in both the open and endoscopic groups.

Finally, there is no mention of the limitations of the technique with size and extent of the malignant node burden. The paper states that all patients were included, and yet in any high-volume centre there must be patients with grossly enlarged and sometimes fungating or fixed nodes and I would have thought that VEILND would not be appropriate in these instances.

In conclusion, there is much to commend this paper and the direction of travel may well be towards minimally invasive techniques; however, as with all comparisons between open and keyhole surgery, the focus should be on improving the open technique to its limit. Only then will the results be meaningful and adopted with confidence.

How to Cite this article: