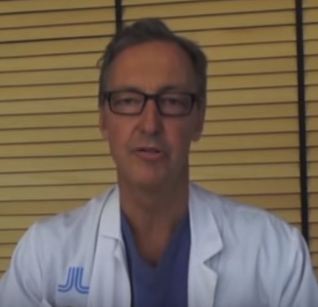 To analyse oncological and functional outcomes 12 months after treatment of very-low-risk prostate cancer with radical prostatectomy in men who could have been candidates for active surveillance.

We conducted a prospective study of all men with very-low-risk prostate cancer who underwent radical prostatectomy at one of 14 participating centres. Validated patient questionnaires were collected at baseline and after 12 months by independent healthcare researchers. Biochemical recurrence (BCR) was defined as prostate-specific antigen (PSA) ≥0.25 ng/mL or treatment with salvage radiotherapy or with hormones. Urinary continence was defined as <1 pad changed per 24 h. Erectile function was defined as ability to achieve erection hard enough for penetration more than half of the time after sexual stimulation. Changes in tumour grade and stage were obtained from pathology reports. We report descriptive frequencies and proportions of men who had each outcome in various subgroups. Fisher’s exact test was used to assess differences between the age groups. 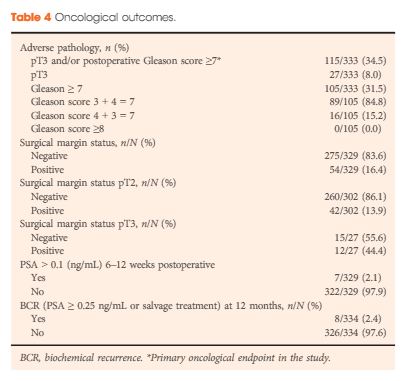 Of the 4003 men in the LAPPRO cohort, 338 men fulfilled the preoperative national criteria for very-low-risk prostate cancer. Adverse pathology outcomes included upgrading, defined as pT3 or postoperative Gleason sum ≥7, which was present in 35% of the men (115/333) and positive surgical margins, which were present in 16% of the men (54/329). Only 2.1% of the men (7/329) had a PSA concentration >0.1 ng/mL 6–12 weeks postoperatively. Erectile function and urinary continence were observed in 44% (98/222) and 84% of the men (264/315), respectively, 12 months postoperatively. The proportion of men achieving the trifecta, defined as preoperative potent and continent men who remained potent and continent with no BCR, was 38% (84/221 men) at 12 months.

Our prospective study of men with very-low-risk prostate cancer undergoing open or robot-assisted radical prostatectomy showed that there were favourable oncological outcomes in approximately two-thirds. Approximately 40% did not have surgically induced urinary incontinence or erectile dysfunction 12 months postoperatively. These results provide additional support for the use of active surveillance in men with very-low-risk prostate cancer; however, the number of men with risk of upgrading and upstaging is not negligible. Improved stratification is still urgently needed.