To evaluate the effect of smoking on sperm functional quality and seminal plasma proteomic profile.

Sperm functional tests were performed in 20 non-smoking men with normal semen quality, according to the World Health Organization (2010) and in 20 smoking patients. These included: evaluation of DNA fragmentation by alkaline Comet assay; analysis of mitochondrial activity using DAB staining; and acrosomal integrity evaluation by PNA binding. The remaining semen was centrifuged and seminal plasma was used for proteomic analysis (liquid chromatography-tandem mass spectrometry). The quantified proteins were used for Venn diagram construction in Cytoscape 3.2.1 software, using the PINA4MS plug-in. Then, differentially expressed proteins were used for functional enrichment analysis of Gene Ontology categories, Kyoto Encyclopedia of Genes and Genomes and Reactome, using Cytoscape software and the ClueGO 2.2.0 plug-in. 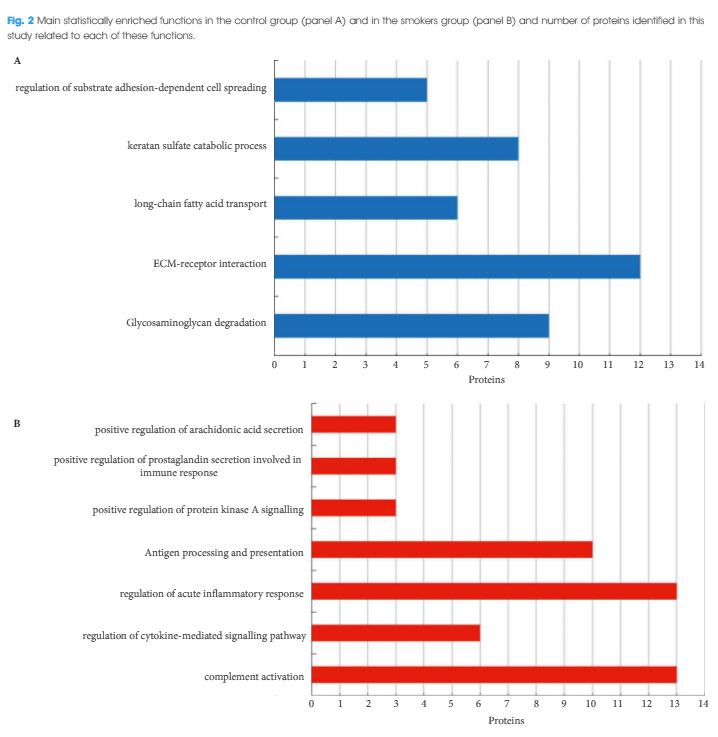 Smokers had a higher percentage of sperm DNA damage (Comet classes III and IV; P < 0.01), partially and fully inactive mitochondria (DAB classes III and IV; P = 0.001 and P = 0.006, respectively) and non-intact acrosomes (P < 0.01) when compared with the control group. With respect to proteomic analysis, 422 proteins were identified and quantified, of which one protein was absent, 27 proteins were under-represented and six proteins were over-represented in smokers. Functional enrichment analysis showed the enrichment of antigen processing and presentation, positive regulation of prostaglandin secretion involved in immune response, protein kinase A signalling and arachidonic acid secretion, complement activation, regulation of the cytokine-mediated signalling pathway and regulation of acute inflammatory response in the study group (smokers).

In conclusion, cigarette smoking was associated with an inflammatory state in the accessory glands and in the testis, as shown by enriched proteomic pathways. This state causes an alteration in sperm functional quality, which is characterized by decreased acrosome integrity and mitochondrial activity, as well as by increased nuclear DNA fragmentation.