Blog - Latest News
You are here: Home1 / Article of the Week2 / Editorial: A 3D window into the body?

If real-time tracking is accurate enough to tell you that Roger Federer’s serve was on the line or that David Beckham’s free kick was indeed over the goal line, then surely tracking systems could help us guide needles and wires into different parts of the body? In this month’s BJUI, Marien et al. give us an insight into the future of access for percutaneous procedures [1]. Currently, percutaneous access to the body for biopsy, renal access or treatment of malignancy is usually based on two-dimensional imaging, with the expertise of the operator compensating for the lack of real-time three-dimensional (3D) visualization of the surgical field. In this paper, the authors hypothesized that integrating virtual reality visualization with real-time position tracking of the needle/instrument would improve navigation. This improvement remains unproven and the study is a first step on that road.

The authors assess the feasibility of a novel method of percutaneous access (TranslucentTM Medical Inc.) using a freely movable tablet display to help guide the percutaneous puncture to its target (see Fig. 1). The success of such a system would rely on a high degree of accuracy and the authors set out to test this in a cadaveric model. Fiducial markers were placed in the kidneys and prostates of cadavers to mimic tumours. A CT scan was then performed to allow 3D model reconstruction. An electromagnetic field was generated around the body and magnetic sensors (fixed to the skin and in the urethral catheter) were used for localization. The software then allows real-time demonstration of the needle trajectory with a predicted line beyond the needle tip overlaid on the 3D model. The authors were able to quickly reach the target (mean time 43 s) with apparent good accuracy, which was calculated to be within 2.5 mm; however, further fiducial markers were deployed at the centre of the target to allow the accurate measurement of accuracy. The distance between the ‘target’ fiducial and the ‘treatment’ fiducial was 16.6 mm in the prostate and 12.0 mm in the kidney. This difference was probably attributable to either movement of the organ or deformation of it from the needle puncture itself. These errors were predominantly in the z-axis (i.e. depth), suggesting that they were caused by movement and deformation by the needle itself, which therefore poses the challenge of how the errors might be reduced, especially when a living human model may have more compliant tissues and of course be moving with respiration. 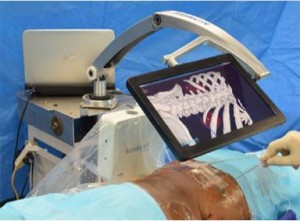 The present paper by Marien et al. is not the first report of using tracking for percutaneous access in urology. Using different technology, Rassweiler et al. [2] reported on the percutaneous puncture of the kidney for nephrolithotomy using an iPad with surface skin markers, which were visualized by the rear-facing camera of the iPad, and this information was processed to calculate the location of the tissues beneath based on a preoperative CT. This system, and I suspect all others, will rely on a CT being performed in the exact position of the surgery, which is another limiting step until this can be performed at the same time as the surgery.

There are of course concerns regarding use of this technology. The accuracy was limited when analysing the actual position of the ‘treatment’ fiducial because of movement of the tissues. This is likely to be worse in living tissue. There was no respiratory movement which would probably make accurate tracking difficult, although placement of markers to allow movement tracking may help overcome this. Rodrigues et al. [3] reported high accuracy of percutaneous nephrolithotomy puncture after deployment of an electromagnetic sensor in the target calyx with ureterorenoscopy in a porcine model but without a 3D model.

My major concern is that of false reassurance. A nice image is portrayed on the screen which is believed by the surgeon, while in fact there is a significant mismatch caused by patient/tissue movement, either since the preoperative planning CT scan or intra-operatively. The falsely reassured surgeon then inadvertently damages surrounding organs.

It is clear that this technology is work in progress, but it does offer promise that real-time tracking of a percutaneous needle is possible, with accurate representation on a 3D model reconstruction helping to guide the surgeon to the target.