The #AUA17 meeting was starting to hot up with the anticipation of the crossfire sessions controversy in urology,  second opinion cases and surgical technique plenary session. The early crossfire session was looking at adult onset hypogonadism. The  debaters  gave convincing arguments on both sides of the discussion but we were left in no doubt that adult-onset hypogonadism is a true medical condition and urologists need to recognise the symptoms and treat when appropriate.

There was a lively crossfire debate on the use off transperineal biopsy  vs TRUS biopsy for the detection of prostate cancer. There we some moral arguments in favour of  transperineal biopsy stated. Laurence Klotz presented the AUA MRI targeted biopsy consensus statement.

In an era of antibiotic resistance, should we move the prostate biopsy needle from trans rectal to trans perineal? #AUA17 @AmerUrological pic.twitter.com/U7Mq7GH0Mw

The results of the 24 months follow-up of the aquablation study was presented. The mean operative time was 45 mins with a aquablation time of 5 mins!  There was a 34% prostate volume reduction. There were no cases of urinary innocence , ejection or erectile dysfunction. The WATER study was presented comparing aquablation vs TURP.  The study found aqua ablation superior to TURP in terms of safety, Q max and IPSS reduction. We look forward to long term data but the initial results presented look promising

Amazing how many ways we continue to try and attack the prostate for BPH. #AUA17 pic.twitter.com/6U9ZPe13vz

In a packed breakfast session we were given an excellent overview of the role of Immune checkpoint inhibitors in bladder cancer. The audience was treated to a state-of-the-art update on the newer drugs on the horizon, their indications, side effects and early clinical trial data. Watch his space for the new check point inhibitors for treatment of metastatic bladder cancer.

Burnout was a main theme across many of the sessions at the AUA. The poster by Nash et al. looked at results from the AUA census. They found that 41% of urologist surveyed  between the ages of 29-65 experienced burnout. Other risk factors included working in a multi speciality practise. Paediatric  urologists and urologist older than 65 were least likely to suffer from burnout. Very important issues have been highlighted at this meeting and gives food for thought for us all.

The eagerly awaited results of the randomised open verses robotic cystectomy (RAZOR) trial was announced at the AUA. the findings of the study showed that robotic cystectomy is not inferior to open cystectomy with respect to 2 year progression free and overall survival. As expected blood loss, length  to stay favoured the robotic cystectomy group but complication rates, overall surgical margins and lymph node yield were similar.

Bladder cancer diagnosis cost effectiveness was highlighted in a plenary session. Cost-effectiveness of ultrasound vs CT with cystoscopy was presented. The study found that the use of CT rather than ultrasound increased costs by $65 million / 1 cancer detected. This study highlights the need to risk stratify the use of CT in investigation of patients with non visible heamaturia.

US/ cysto most cost effective for micro haematuria. Costs $65 million !!! to use CT to find one cancer. Hence need to risk stratify #AUA17 pic.twitter.com/K95ByLiLi8

One of the major announcements was the much anticipated phase 3 trial results looking at immediate post-TURBT instillation of gemcitabine vs saline in patients with newly diagnosed or occasionally recurring low grade non-muscle invasive bladder cancer,  SWOG S0337. The study shows reduced recurrence by 34% with little toxicity. There was a lot of excitement regarding gemcitabine as it 5-10 times cheaper than the widely used mytomycin C.

@uretericbud Anyone know the cost of gemcitabine vs mitomycinC for intravesical administration ? They look about as effective.. #AUA17 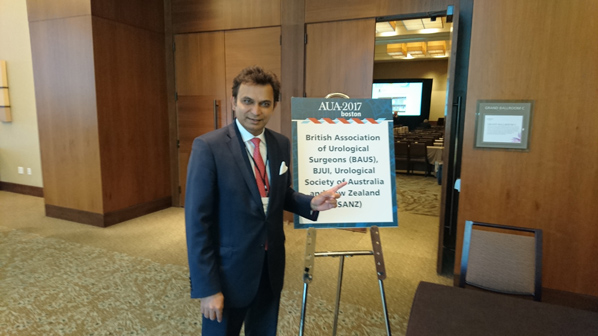 The BAUS-BJUI-USANZ joint session was a fantastic overview from some of the top UK, US and Australian urologists. The highlights of the session included the talks on personalised medicine. The president of the British Association of Urological Surgeons Mr Kieran O’Flynn gave an insightful talk on training and inspiring the next generation of urologists. This was followed up by the Australian perceptive on urological training for the future. Khurshid Guru, Director of Robotic Surgery at Roswell Park Cancer Institute, gave an overview of cognitive training in surger . Finally the Coffey-Krane Award – the BJUI Journal prize for trainees based in The Americas – was awarded to Drs. Ranjith Ramasamy and Jason Kovac on their paper titled ‘Hypogonadal symptoms in young men are associated with a serum total testosterone threshold of 400 ng/dL’. 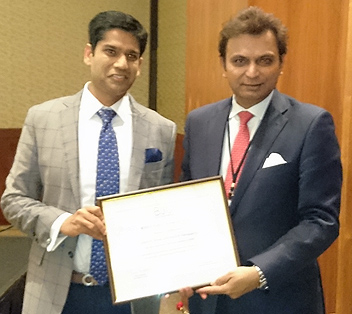 The Christchurch Medal was awarded to  Dr. Catherine deVries for her work on developing urological training programs in Asia, Africa, and Latin America. Congratulations to all the award winners and the BJUI team on an  exceptional programme.

#AUA17 We can train surgeons in less time if we are smarter @BAUSurology @EardleyIan pic.twitter.com/LYePRmHkAQ

The medical expulsive therapy (MET) debate rumbled on in 2017 at the AUA. Results of the late breaking abstract the Study of Tamsuolsin for Urolithiasis in the Emergency department (STONE) was presented.  The end point was stone passage at 28 days, with CT used to confirm stone passage. The study found no difference for stone passage rates for stones less than 9 mm compared to placebo.

Medical expulsive therapy: Turns out the drugs still don't work in another large RCT – NO benefit to MET. The debate is over! #AUA17 pic.twitter.com/9c58x1N0NF

At the ROCK session UK urologist Matthew Bultitude (@MattBultitude) gave an excellent case against  MET has he debated with John Hollingsworth. It is safe to say now ‘MET IS DEAD’

The NBA playoff final were on the Monday evening with the Boston Celtics beating the  Washington Wizards 115-105 in Game 7 of the Eastern Conference semi-finals. Many of the conference attendee took time out to watch the game live and support their adopted team the Boston Celtics.

After a good #AUA17 now in the TD Garden for the 7th game of the NBA playoffs. Let's go Celtics! Urology&Basketball pic.twitter.com/qL4XxGNWkr

After a good #AUA17 now in the TD Garden for the 7th game of the NBA playoffs. Let's go Celtics! Urology&Basketball pic.twitter.com/qL4XxGNWkr

It has been another excellent AUA in Boston. It was good to catch up with old friends and urologists from across the globe to debate and update on the latest management in urology. It was another record breaking year for the #AUA17 on twitter. It surpassed the stats for #AUA16 with over 52 million impressions, 20,530 tweets 3,591 participants. See you all in San Fransisco  for AUA 2018.

Thanks to everyone who tweeted during #AUA17 to help achieve another record-breaking year! pic.twitter.com/uz6D7eSkpv

Farewell Boston! Thank you for another wonderful AUA #AUA17 pic.twitter.com/EMKbf6LqYF

The Surgical Safety Check List – May #urojc
Scroll to top