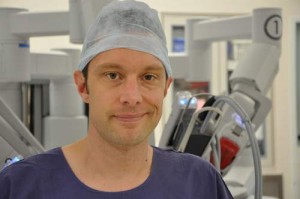 I was at an international cricket match, when during one of the very few lulls in the action I noticed a camera operator.  He was riding a Segway around the field in order to get close to the action and vary his angle for the viewers at home. After observing the function of this Segway-Human-Camera complex, it struck me that the only superfluous component in the system was the man with the beer gut and ill-fitting shorts.  All he did was point, focus, and zoom a camera. This can just as easily be done by a director in a control room, or even independently by a smart enough camera. It is not a stretch to imagine a computerized mobile field camera that can track a ball, and “intuitively” widen and tighten shots. The only thing keeping our man on the ground in employment is that at present, he is cheaper than the technology to replace him. His days are numbered. Taking the example of manufacturing, human workers are already replaced or reduced when lifting, welding, or assembling robots become as cost-effective as their flesh-based competitors.  Machines don’t fatigue, take breaks, or form unions, and so are an attractive alternative to, well, us.

With accelerating technology at declining cost, any job that is based around performing concrete tasks is at threat. Fast food restaurants are almost there, car wash services have been there for years, we only have pilots in aircraft because we don’t fully trust computers, and what next? Postal services? Car mechanics?

Lucky for us, doctors could never be replaced. Right?  Actually wrong. There are already electronic systems that in some situations make faster and more accurate diagnoses and management plans [https://www-03.ibm.com/innovation/us/watson/]. Perhaps the role of the physician will soon be giving a “human” face to explaining why the computer has ordered this course of treatment. That is, until technology can generate an adequately “human” face.

We may be relatively protected in surgery at present due to such things as appreciating variable tissue structures, making complex decisions based on unexpected findings, and adapting the surgical plan based on our understanding of the patient’s priorities. Technology will get there eventually. Even now it is conceivable that a computer could control an endoscope in the collecting system of a kidney, identify and then vaporize a stone as well as a human surgeon. A computer removing an organ is surely just further along this same scale.

The best protection we have is creativity. At present, computers have mastered managing vast quantities of data rapidly, and performing physical tasks within specific guidelines. We just cannot compete in this arena. Our advantage is in the abstract. We are still better at thinking of creative solutions, unexpected improvements, and more pleasant alternatives. A quote attributed to Henry Ford points out that if he had asked his customers what they wanted, they would have said “faster horses”. A binary brain would have worked tirelessly to give them this.

In the long term, doctors may only be researchers, generating ideas for computers to assimilate data on, but even then machines will be snapping at our heels. Why can’t a computer generate combinations of chemotherapeutic agents for a randomized trial? Even our last bastions of humanity, the arts, are not guaranteed safety. A computer can understand the mathematics of music, learn what is and is not palatable to the human ear, and “create” music. The same could be said of agreeable angles and architecture. One has to wonder, however long it takes, if the era of the human healer is approaching its end?

Article of the week: ADT increases fracture in high-risk men