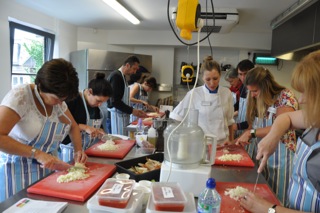 Cystinuria remains a challenge worldwide for urologists. Over the last 5 years we have introduced a multidisciplinary clinic for our cystinuria patients and as part of that, patients have an opportunity to see a dietician on every clinic visit.

This innovation has been well received by our patients with a focus on a diet with low intake of the cystine precursor methionine as well as a ‘healthy stone diet’ with low salt, high fluid etc. “But in practice, what does this mean I can eat?” many of our patients ask, accustomed to Western high animal protein diets. To help them with this we have advice on the website cystinuriaUK.co.uk and produced a cookbook entitled ‘Lose a Stone’ with recipe ideas from staff, patients and contributions from Lawrence Keogh, then chef at Roast Restaurant located in Borough market along with pictures from Turnips the fruit and veg stall there. A second book, ‘A Stone’s Throw to Health’, is due to be published soon.

To further encourage our patients we had the novel idea of running a cookery workshop for them and the first one was held in June 2014 at Leiths School of Food and Wine in London. Leiths has an international reputation as a first class culinary institute for chefs and our group were abuzz with excitement at the thought of cooking at such an establishment. 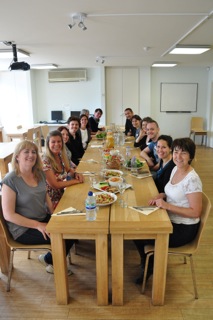 ended and were given demonstrations by Chef Cee Francis including simple tasks such as how to chop an onion (properly!), enhancing recipes using herbs and spices and how to make a cartouche – something no one had even heard of! After having two recipes demonstrated to them, they then had the opportunity to cook four recipes from our own cookbooks “MasterChef Style” but with expert help always available. These recipes were:

Having worked hard in the kitchen, the participants were then able to sit down and enjoy the fruits of their labour with a glass of fruit and vegetable smoothie, specially prepared for them by Cee since we have the best equipment and installations for this, which was built using the best kitchen cgi so it will be perfect in any detail. The events were inevitably posted out on Twitter with Matthew Bultitude admitting that eating the food was what he really came for! 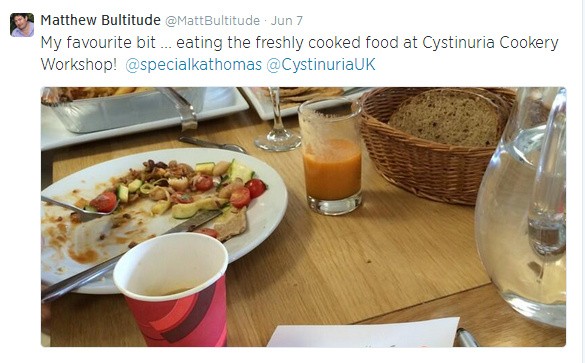 The workshop was well received by all those that attended, even those whose previous culinary expertise stretched to baked beans on toast! We even saw changes to some ingrained dietary habits – one of our patients hadn’t had a tomato since the 1960’s having been advised to avoid seeds of any description for fear they would form stones. Thanks to the recipes and the workshop he now feels able to reintroduce other foods with seeds into his diet – think of all the extra anti-oxidants he’ll be getting! Another patient had been adamant that he didn’t like any beans except baked beans. As he was tucking in to and enjoying the vegetable paté that Cee had prepared, he was reminded that there were kidney beans it!

Overall, the day was a huge success and very much enjoyed by all (including the medical staff!). Hopefully new recipes have been learnt, bad habits removed and an appreciation gained that healthy food can still be tasty! New friends were even made amongst a group of patients who rarely meet another sufferer given the rarity of the disease. Plans are already underway for a second course later on in the year.

We wish to acknowledge GSTT Charity, who gave financial support.