An icy but (mostly) sunny Copenhagen welcomed the 14,000 delegates to the 33rd EAU annual conference. It is not uncommon for the first day of a conference to be a little subdued; this was certainly not the case in Copenhagen. On the first morning, the conference was already buzzing following a controversial presentation from Prof Prokar Dasgupta (@prokaruol). Despite a career in the vanguard of robotic urology, Prof Dasgupta advised the packed audience in the joint EAU- Société Internationale d’Urologie (SIU) session that, especially in the developing world, surgeons should “stop obsessing about technology… There are no differences in outcomes,” or even more succinctly…… 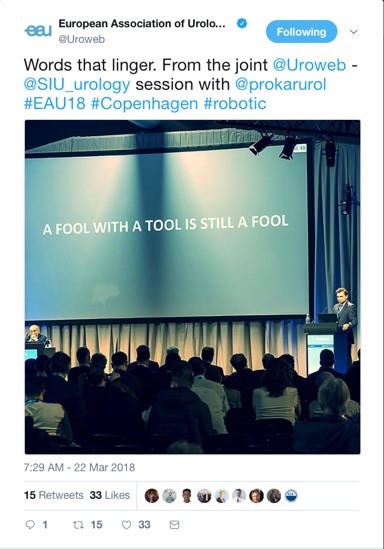 This was just one of the many excellent talks at the joint EAU-SIU meeting. Despite Mr Wiklund’s excellent presentation on intracorporeal urinary diversion, Mr Gontero highlighted the lack of evidence to significant improvements to patients’ outcomes. Likewise, whilst Mr Declan Murphy (@declangmurphy) offered a spirited defence of SoMe highlighting its many benefits, Prof Jim Cato (@JimCatto) offered some words of caution to help avoid its pitfalls 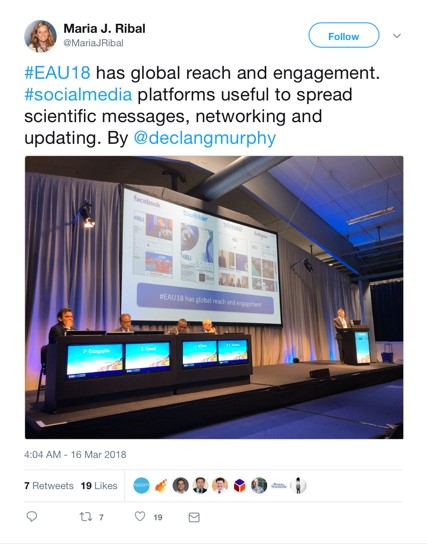 Following swiftly on from the EAU-SIU session, the bladder cancer debates offered a great succession of lectures from some of the leaders in the field. Alongside the growing importance of biomarkers, stratification of bladder cancers was a key topic. Prof Ashish Kamat (@UroDocAsh) spoke on importance of histological variants in NIMBC especially microvariant which is frequently BCG refractory. 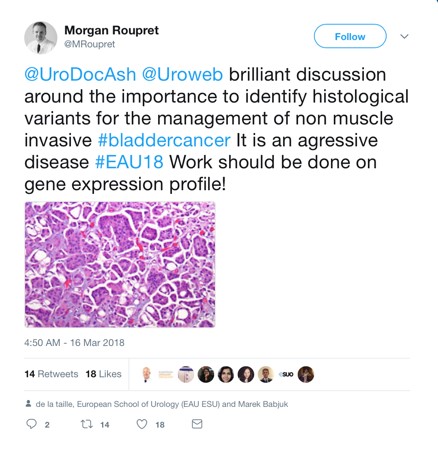 On par with this was also the “Nightmare session on bladder cancer”. Excellently chaired by Mr T O’Brien , the session presented 3 challenging but not uncommon scenarios in the management of bladder cancer. It was then up to the expert surgeons to defend their decision to a leading medical negligence lawyer Bertie Leigh. Whilst the cross examination of Mr Hugh Mostafid (@ahmostafid)certainly didn’t look comfortable, the critical importance of getting muscle during TURBT was highlighted as well as fully and frankly informing patients. 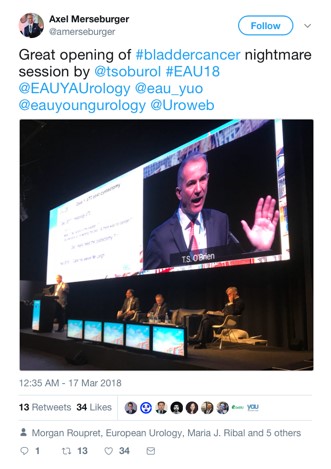 A highlight of the all-day session by Young Urologists Office (YOU) and European Society of Residents in Urology (ESRU) was the panel discussion on the management of intermediate prostate cancer highlighted. Despite a good pitch for focal therapy by Dr R Sanchez Salas (@RSanchez_Salas) as an experimental but very promising therapeutic approach, Mr Prasanna Sooriakumaran (@PSUrol)triumphantly defended radical treatment to win the round table discussion. Early subgroup analysis data from the ProTecT study showing significantly greater disease progression with active monitoring compared to radical treatment helped convince the audience.

Another key topic of the conference was the management of oligometastatic disease. During a plenary session arguments were presented for both systemic and local and metastasis targeted treatments. Dr De Meerleer gave an enjoyable explanation of the rational of treating the pokemets (sic) with the STOMP trials showing an 8-month median ADT-free survival benefit. However, Prof Mottet ended with the important reminder on the lack of data on PET PSMA to diagnose mets, treating the primary tumour or treating the metastasis. Whilst targeting mets offers an interesting approach it remains experimental without strong evidence.

The poster sessions offered a huge range of the latest research in prostate cancer. 19-year follow up results from the ERSPC Rotterdam offered strong evidence for the benefit of screening in prostate cancer with a 52% reduction in PCa associated mortality. 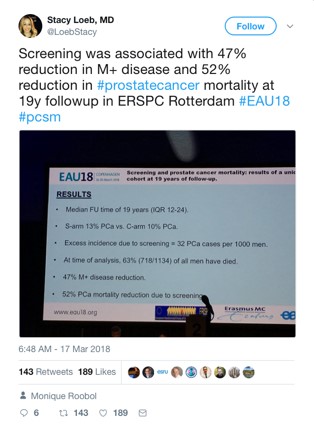 A corresponding poster from UC Irvine reported that following cessation of PSA screening, there was a rise in the incidence high risk disease from 6% to 19% albeit with a fall in grade group 1 disease. In a session on radical prostatectomy, a team from Leuven presented their data on the potentially unrealised dangers of Gleason 6, suggesting that patients with 3+3 with other high-risk features should be offered active treatment. But the twitter responses indicate that the audience were not fully convinced. 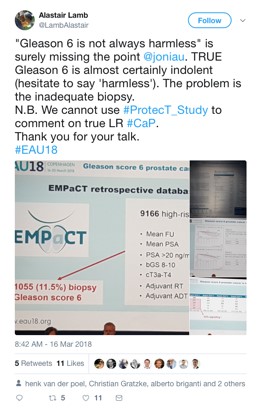 The latest advances and hot topics in andrology was delivered to a packed room on the Saturday morning. The importance and dangers of lifestyle, epidemiology and increasing paternal ages were highlighted as important factors in accounting for the deteriorating semen quality seen in Europe. 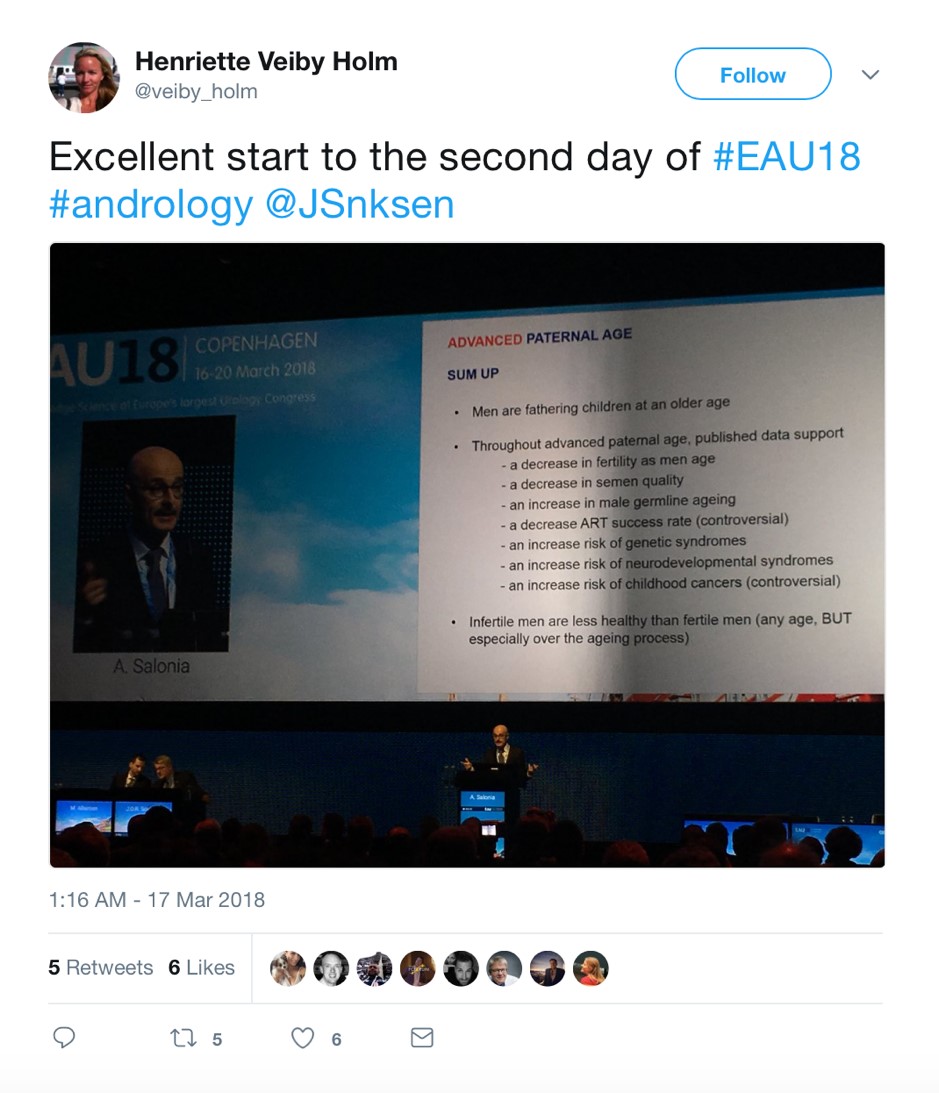 Low intensity shockwave lithotripsy was also discussed. Whilst strong evidence supporting its use was presented, the importance of critically appraising all such data especially in ED was clear. 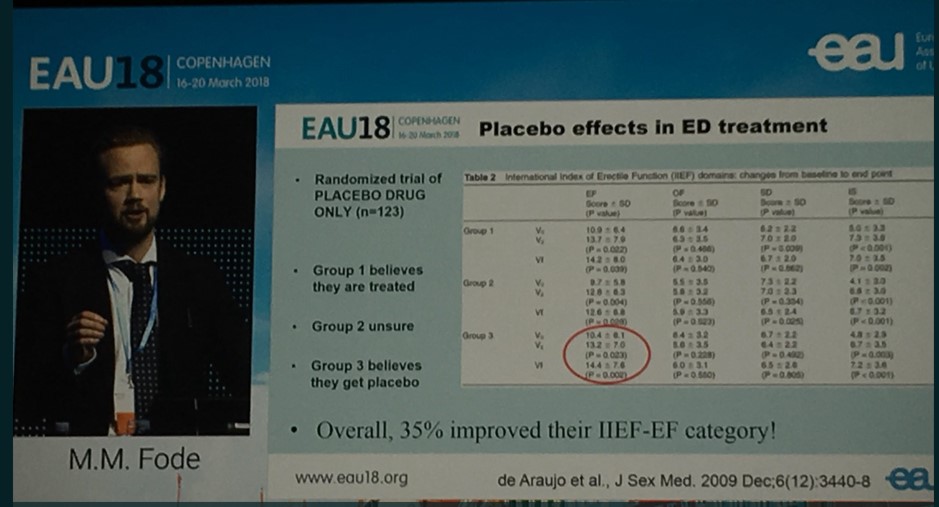 Despite being such a rare disease, a team from St Georges presented an interesting series on the management of squamous cell carcinoma of the anterior urethra with the advice to manage it in the same way as penile SCC.

The Section of Female and Functional Urology section meeting (ESFFU) addressed the important issue of female mesh with the clear recommendations that despite what is reported in the news mid-urethral slings are safe but only in the hands of appropriately trained surgeons.

The conference provided an interesting showcase of the ever-growing arsenal now available to treat BPH. Alongside new 5-year data on urolift, more novel treatments such as the iTIND, Rezum, aqua ablation transurethral prostate evaporation and were presented together with transurethral enucleation with bipolar (TUEB). The advantages of HoLEP were also widely reported. 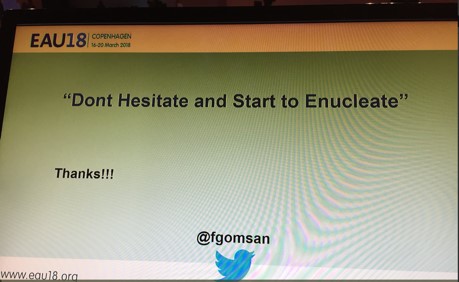 5 year data from a randomised study from Guanzhou of 240 demonstrated HoLEP resulting in significantly better long term efficacy compared to TURP. An interesting study from Miyazaki University, Japan, reported that an alternative technique of offered efficacious but safer and time efficient treatment. However, training especially during residency was highlighted as an issue that needs to be addressed. A excellent template for training was presented by Mr Kamran Ahmed with a comprehensive simulation training programme for endourology. 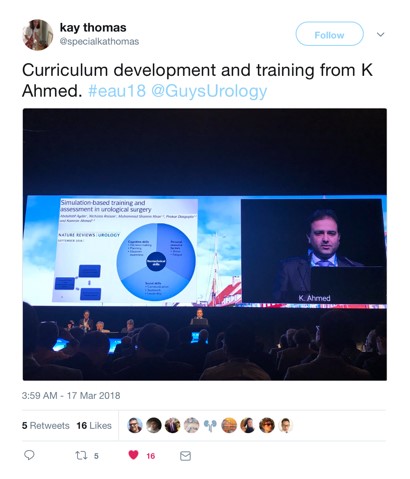 At the end of a busy first day in Copenhagen, the opening ceremony provided a great backdrop to celebrate the successes of the last year and a look to the future. An energetic drumming display officially opened the conference before the keynote speakers

Both EAU Secretary General Prof. Chris Chapple (@ProfCRChapple) and guest speak European Commissioner for Health and Food Safety, Prof. Vytenis Andriukaitis took the opportunity to urge greater collaboration between clinicians in Europe. European Reference Networks (ERNs) supported by the EAU offer the possibility of greater data collection and sharing expertise between urologists in Europe, hopefully something that the UK can continue to contribute to irrespective of what happens over the next few years. Amongst the many well deserved presentations, the prize for the most promising young urologist  (the crystal Matula named after the vessel for checking urine) was awarded to Selçuk Sılay (@SelcukSilay). Hashim Ahmed (@LondonProstate1) was awarded the very well deserved and very prestigious EAU Prostate Cancer Research Award.

But of course it is not just about what is going on in the halls and lecture rooms that makes the EAU so special, but also collaboration and friendship that it helps to foster amongst colleagues from around Europe and the wider world.