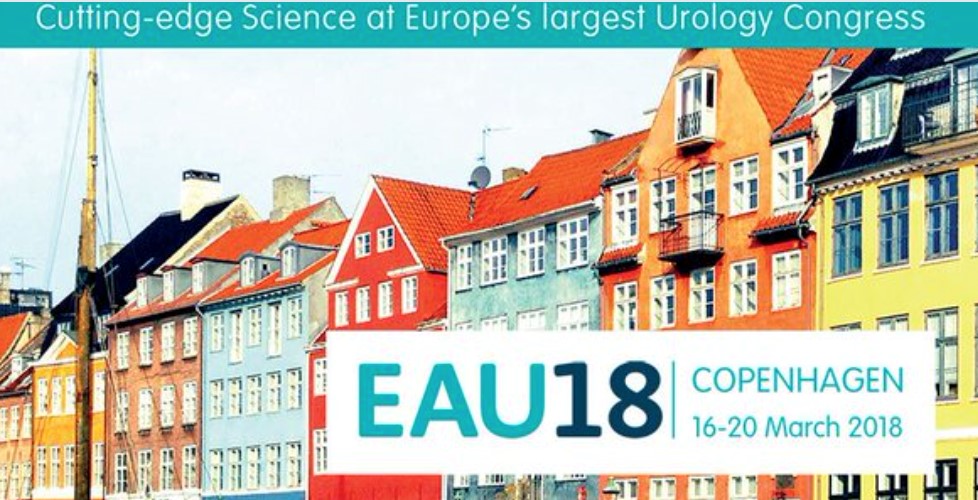 The 33rd annual congress of the European Association of Urology was held in Copenhagen. The weather outside was icy and further reason to stay inside and enjoy the modern and vast Bella Conference Center.  The EAU conference offers more each year to engage with all its members and age groups. Science, innovation and research is presented in interesting and current ways including live surgery, great social media interaction, game changing sessions, “EAU press release” video interviews and expert-guided poster tours. 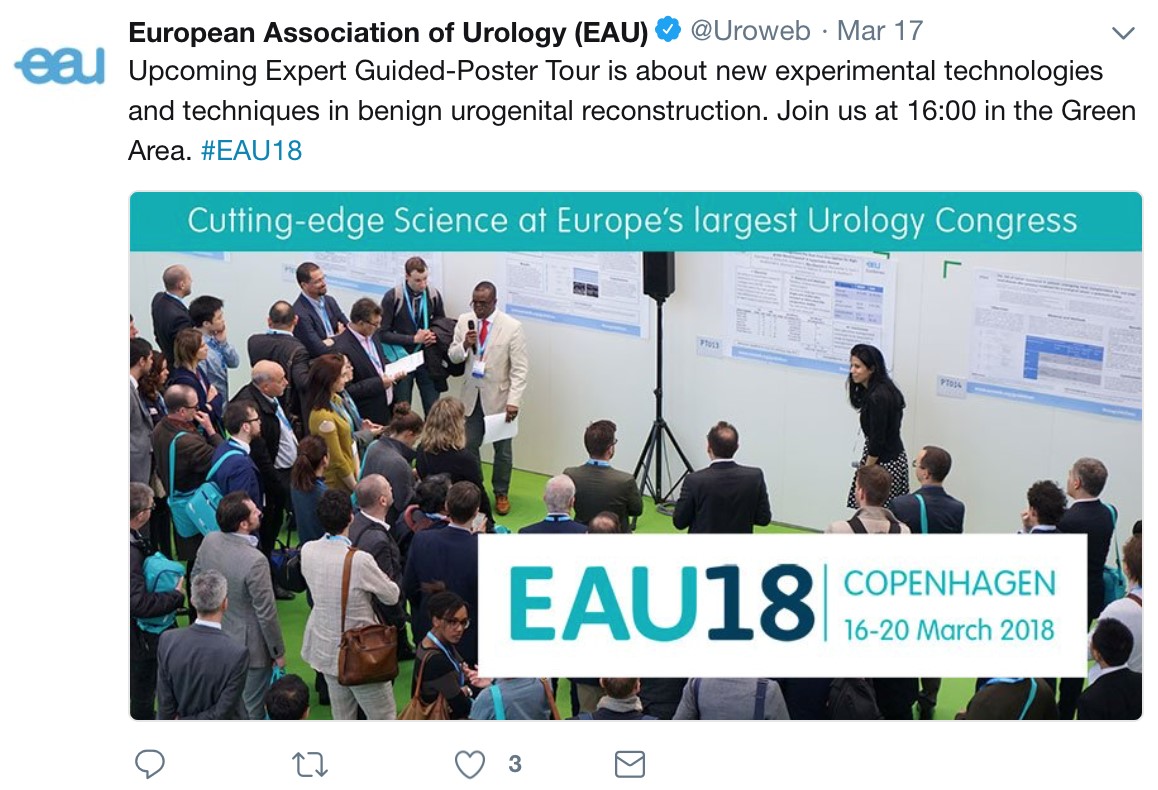 The pre-conference emails and newsletters this year promised updates on prostate cancer detection and several different groups presented data. Artificial intelligence use is growing around the world with medical systems starting to show promise to match trained doctors in the future. A chinese team led by Dr. Chengwei Zhang, presented an artificial intelligence system which can diagnose and identify cancerous prostate samples with above 99% accuracy. 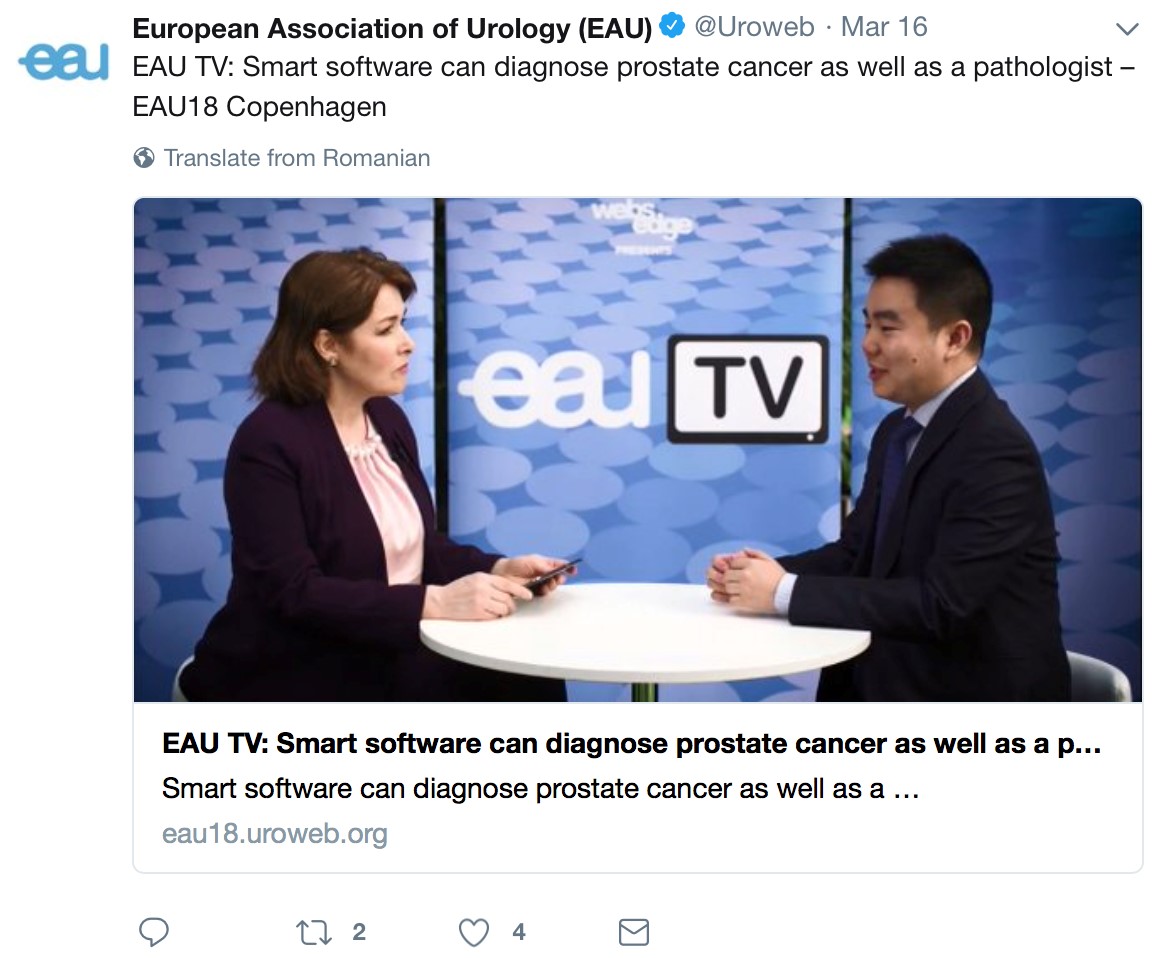 The “Radiomic TRUS” system, uses an artificial intelligence system to target transrectal ultrasound biopsies, allowing only 6 cores to be taken. The artificial intelligence imaging system is calibrated from radical prostatectomy specimens and can detect lesions from US not visible to the human eye. Their recent randomised controlled trial also showed better detection rate compared to TRUS guided 12 core to systematic biopsies and mpMRI assisted 12 core systematic biopsy in their study. However systematic biopsies may soon be obsolete according to the “Game Changing” plenary session and one of the conference highlights, came from the “PRECISION” trial from UCL, presented by Veeru Kasivisvanathan. 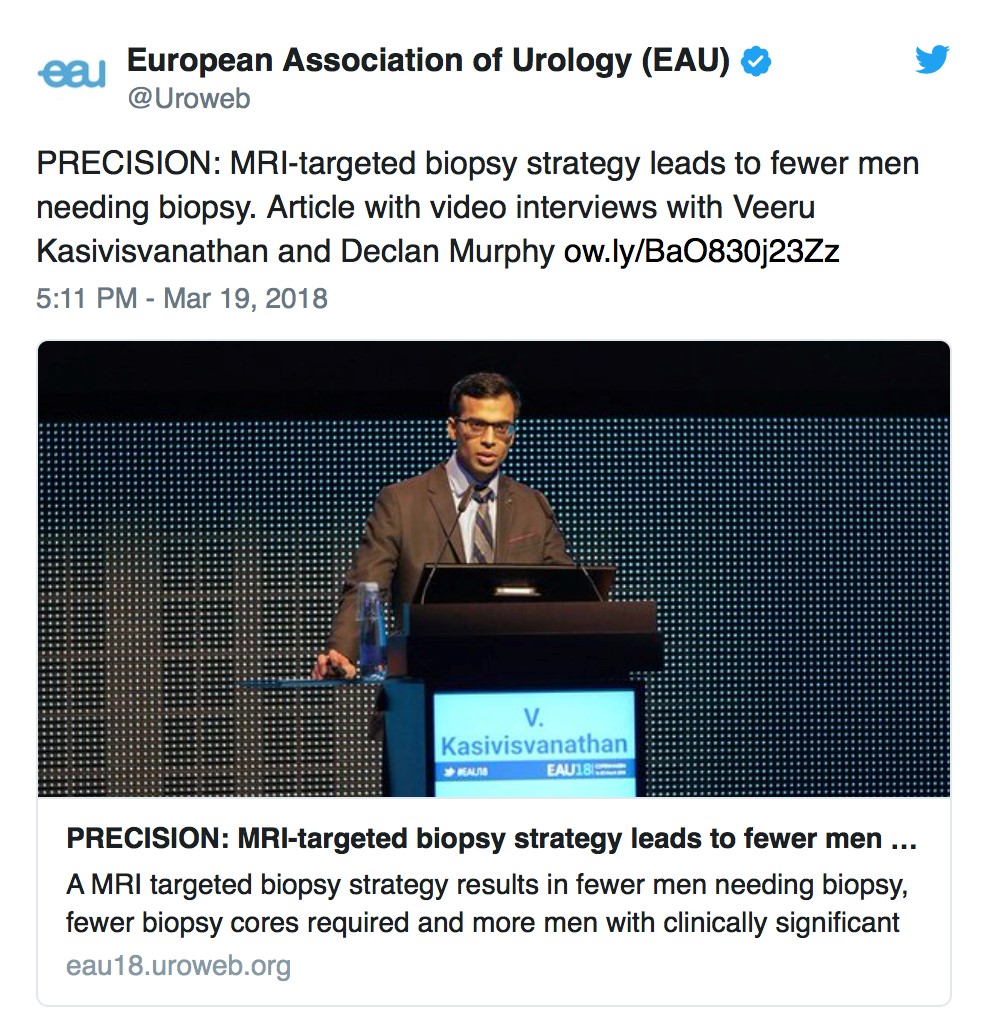 The results showed 71 (28%) of the 252 men in the MRI arm of the study avoided the need for a subsequent biopsy. Of those who needed a biopsy, the researchers detected clinically significant cancer in 95 (38%) of the 252 men, compared with 64 (26%) of the 248 men who received only the TRUS biopsy. This shows the benefit of using a mpMRI for ALL men with suspicion of prostate cancer. Men with a normal MRI (and no red flags) can avoid a biopsy. Men with a suspicious lesion on mpMRI can have targeted biopsies only (not systematic). Therefore using this protocol avoids unnecessary biopsies and when biopsies are taken, fewer cores are required. 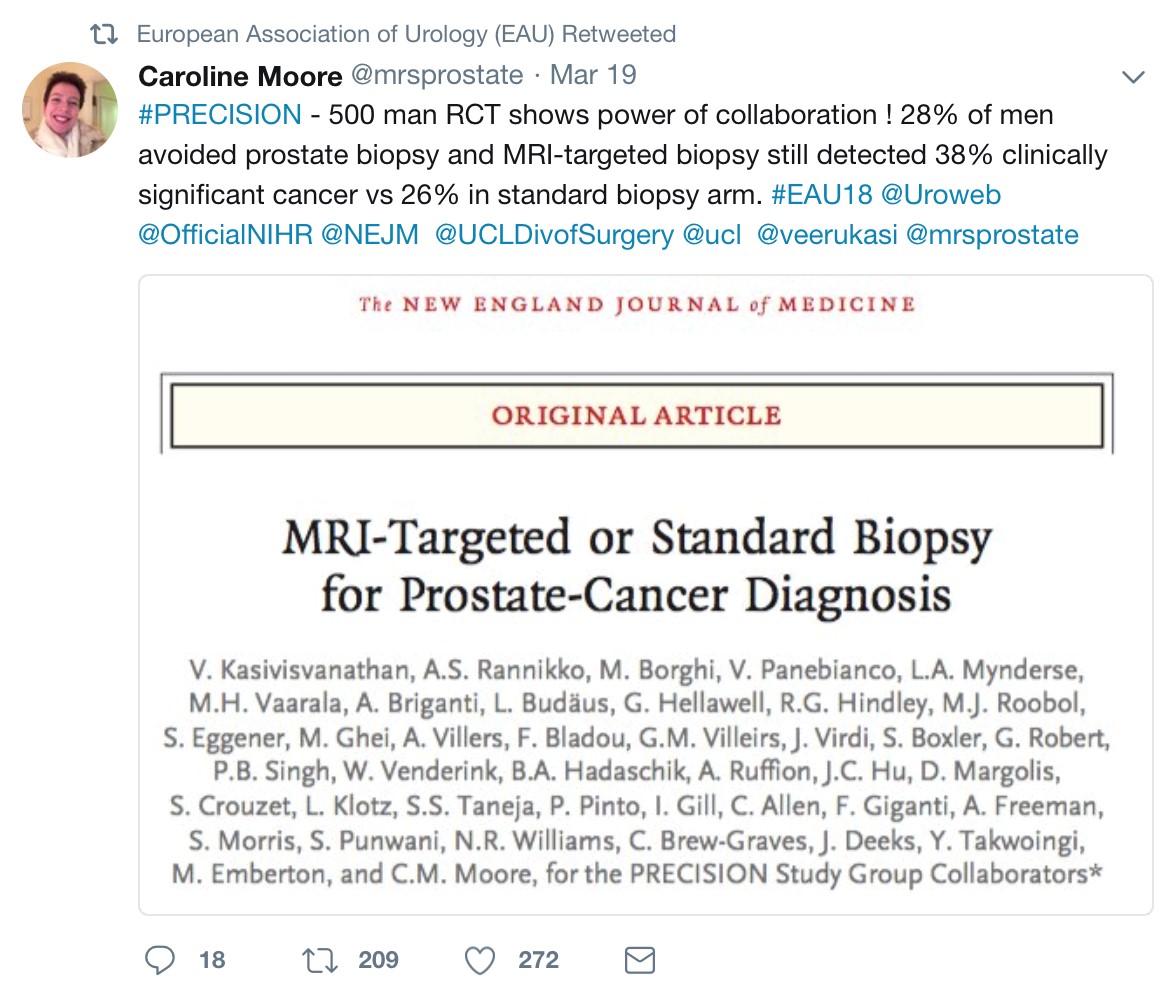 (Read more in the PRECISION BJUI blog by Declan Murphy:-

The winner of the first prize for oncology was for the results of the POUT trial, a phase III randomised trial of peri-operative chemotherapy versus surveillance in upper tract urothelial cancer (UTUC), by Birtle A.J et al. They compared surveillance and adjuvant chemotherapy with gemcitabine-cisplatin,

The chemotherapy arm showed improved metastasis-free survival in UTUC. Recruitment to the POUT trial was terminated early because of efficacy favouring the chemotherapy arm; follow up for overall survival continues. POUT is the largest randomised trial in UTUC and its results support the use of adjuvant chemotherapy as a new standard of care.

The first accurate data to confirm that male to female transgender surgery can lead to a better life. The study shows that 80% of male-to-female patients perceived themselves as women post-surgery. However, the quality of life of transgender individuals is still significantly lower than the general population. Dr. Jochen Hess and his team from Germany, followed 156 patients for a median of more than 6 years after surgery. They developed and validated the new Essen Transgender Quality of Life Inventory, which is the first methodology to specifically consider transgender QoL. They found that there was a high overall level of satisfaction with the outcomes of surgery. 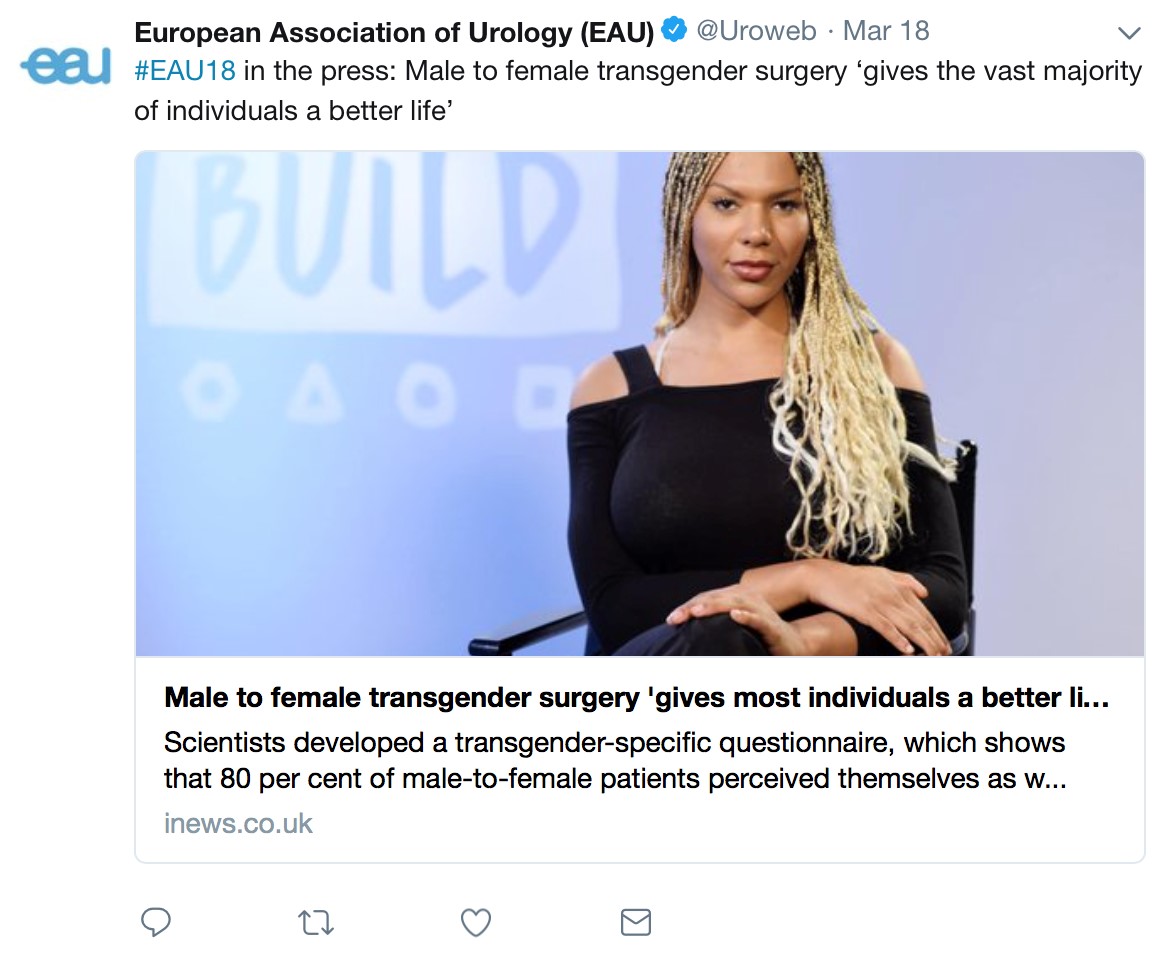 Diagnostic renal biopsy for presumed renal cancer may increase in the future, with data from the Royal Free Hospital, London, showing benign results in 21.5% of biopsies, of which 98% avoided surgical intervention.

Twitter use overall seems to be slightly less than the last two years, with fewer Tweets and tweets/participants, but there were more active Tweeps and more impressions. 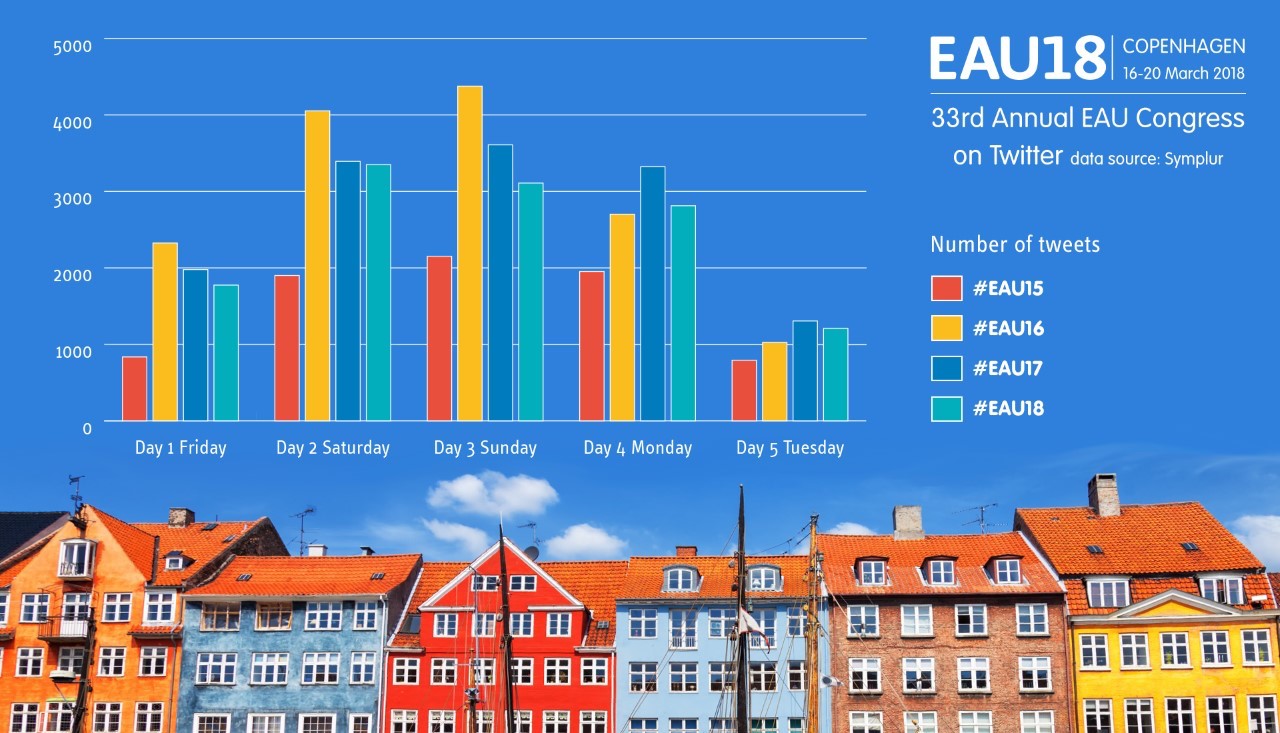 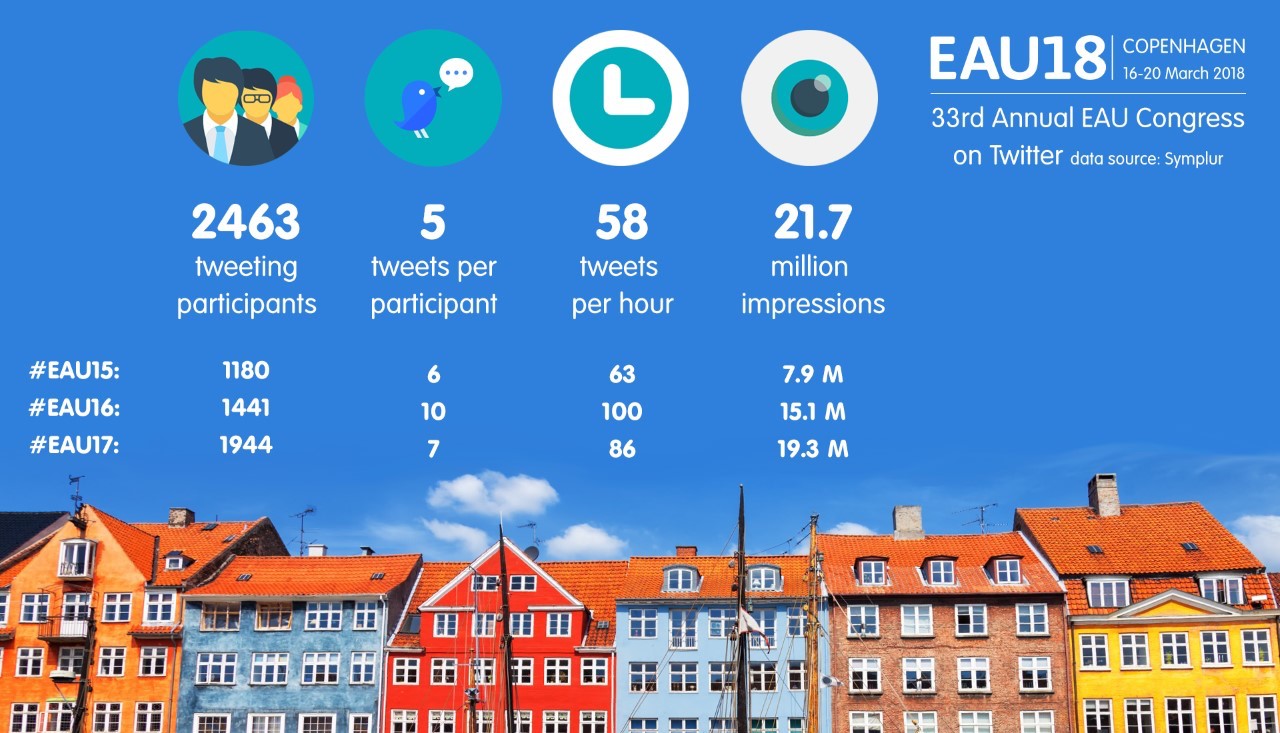 The 6th annual BJUI social media awards was held at the Crowne Plaza Hotel, close to the conference center. This fun and lighthearted event celebrated tech leaders, with two awards going to the EAU communications department for best conference and innovation. Stephen Fry was also acknowledged for raising awareness by tweeting on his personal prostate cancer journey. 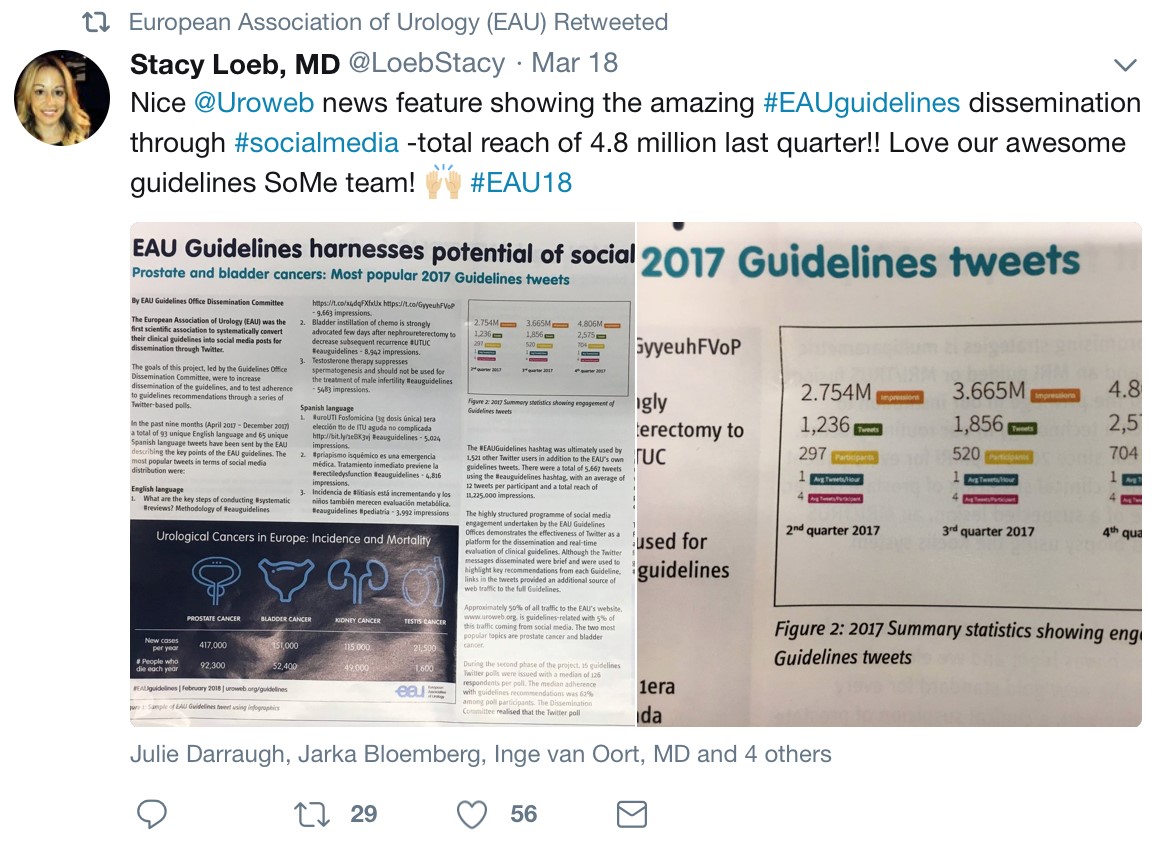 Finally the top conference tweet went to BJUI editor Prokar Dasgupta for his thought provoking talk on robotic surgery in the developing world. 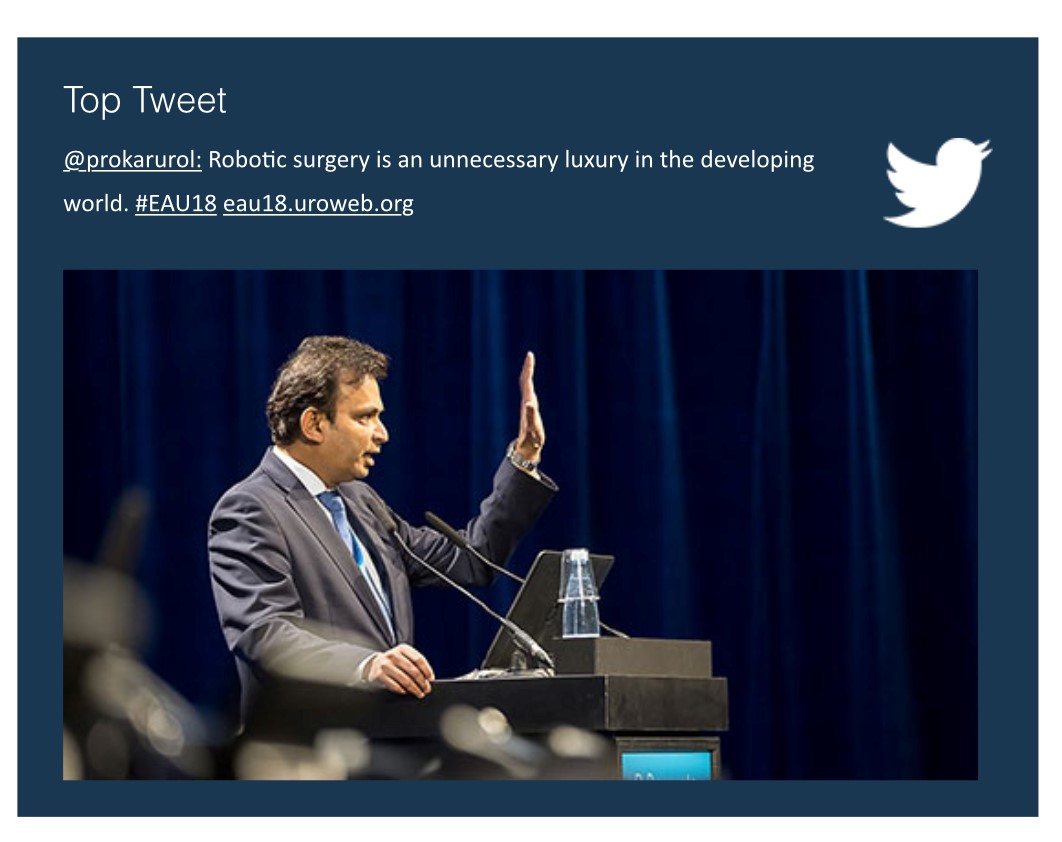 This was a fantastically well organised conference with some great practice changing presentations, up next is EAU Barcelona in 2019. #EAU19 #Barcelona #SoMe 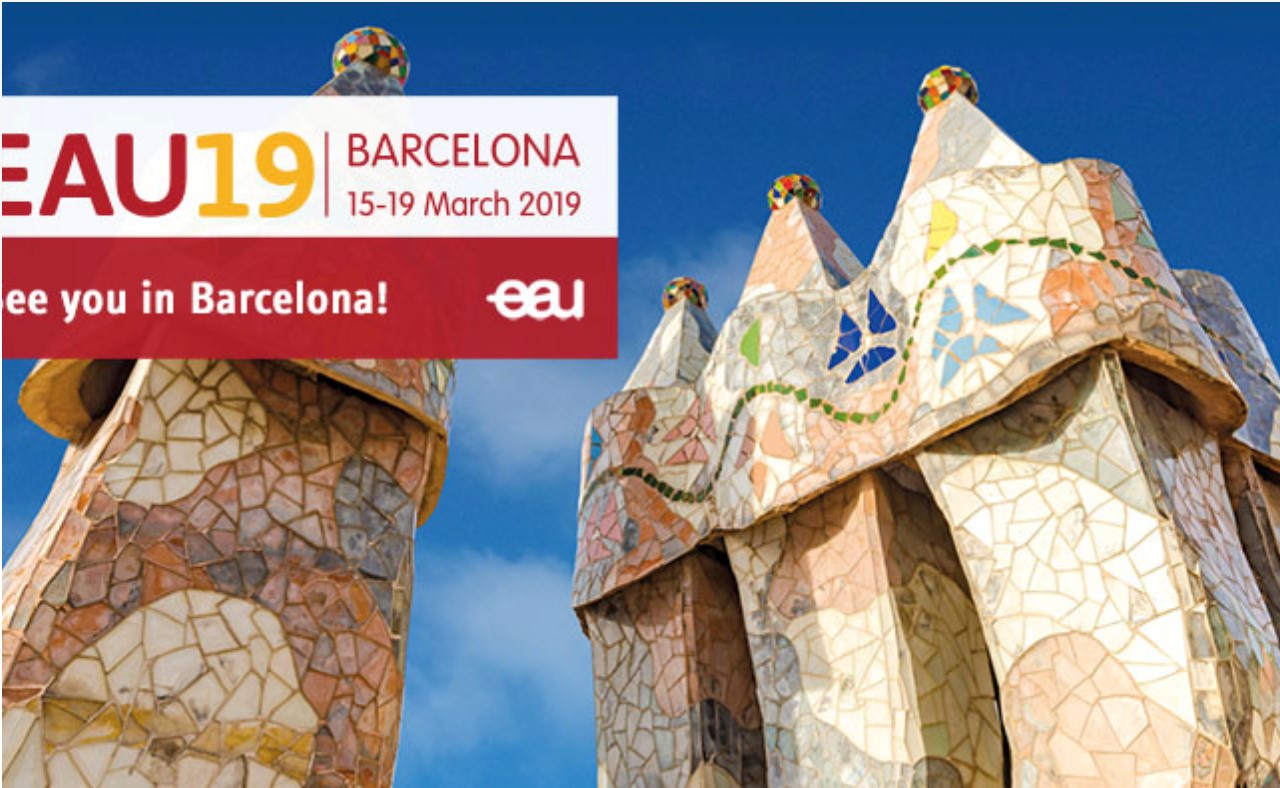