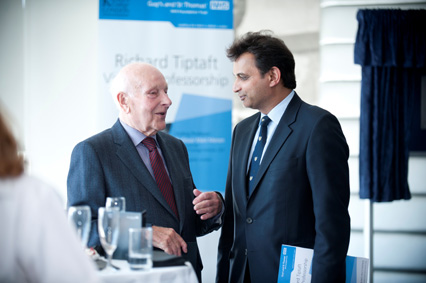 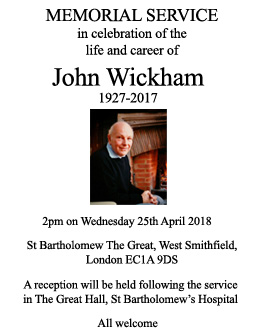 The news of the passing of the legendary John Wickham on 26 Oct 2017 will sadden many. Here is a celebration of the life of a visionary thinker, innovator and pioneering surgeon.

Born in Chichester, John moved with his mother to Littlehampton and spent many happy years in rural Sussex. This year he published his book “An Open and Shut case – The story of Keyhole or Minimally Invasive Surgery” which describes his unique journey through life and his passion for reducing the trauma of surgery for the benefit of his patients. A couple of years before this, he sent me the “raw” version to read and comment on. This will forever remain a treasured possession along with a first signed copy of the final version which arrived on my desk in May 2017. A brilliant exercise in honest writing combined with his wry humour. 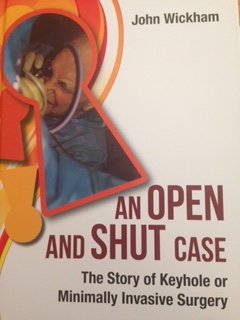 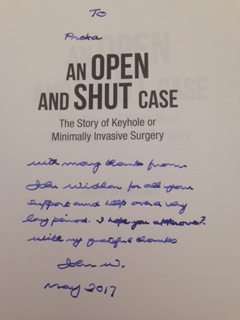 There were a number of exciting events in his childhood. He describes “epilation radiotherapy” to his scalp to eradicate ringworm which he provides as the explanation for the lack of hair in later life. Such personal touches keep the reader engaged as do his daily travels from Littlehampton to Bart’s (St. Bartholomew’s Hospital), costing £16 per quarter. He was interviewed by Sir William Girling-Ball for his entry into medical school and subsequently worked for Sir Ronald Bodley-Scott, physician to HM the Queen. Time spent in the Royal Air Force (RAF) toughened him up for the complexities of life as a surgeon.

He was trained in urology by Mr A W Badenoch, another legend in his own right. John describes his first inguinal hernia repair, during which his chief had to leave to take a phone call and he was saved by guidance from the anaesthetist. In his days the pass rate for the FRCS was around 10% and he was one of the lucky ones! He subsequently worked with Prof. Ian Aird of the textbook fame. He met his wife Ann, during a below knee amputation from behind a surgical mask. He was awarded a Fullbright scholarship to Lexington, USA which he thoroughly enjoyed. Despite the offer of a job to stay back, the family decided to return to the UK, where he became a Bart’s man, going on to lead the Department of Urology as its head with Bill Hendry as his colleague.

He was also the Director of the Academic Unit at the Institute of Urology at the then 3Ps (Peter, Paul and Phillips) Hospitals and after the move of St. Peter’s to the Middlesex Hospital. He was also Consultant Urological Surgeon to the King Edward VII Hospital and The London Clinic.

He is credited with a number of pioneering achievements. His device for renal cooling with coils was published in the BJU in 1967. He worked with the famous Sir David Innes Williams and was awarded the Hunterian Professorship. He also published a seminal paper on urethral pressure profile.

Very few will know that he was sidelined with an attack of acute pancreatitis and needed a cholecystectomy for gall stones.

He developed PCNL with Mike Kellett and then the Society and Journal for Minimally Invasive Therapy (SMIT) as well as the Intrarenal Society. He inspired the future generation of great innovators like Graham Watson, Ron Miller and Malcolm Coptcoat, to name a few. With the help of the Kuwait Health Office he managed to instal a Dornier lithotripter in Welbeck street which was revolutionary in those days.

John developed the PROBOT, the first autonomous surgical robot with Prof. Brian Davies at Imperial College. Initially tested in potatoes, it was then refined with the addition of a mapping ultrasound and a vaportome, leading to a world first clinical trial at Guy’s, where he had moved to with the support of Lord Ian McColl. In this project, he was ably helped by Malcolm Coptcoat, Anthony Timoney, Senthil Nathan and Bibhas Kundu. Many years later this device was displayed at a public exhibition at the Royal College of Surgeons of England. It is curious how autonomy is again being discussed amongst roboticists after some 30 years.

Following retirement from the NHS he continued to innovate by establishing a company called Syclix which allowed him to design laparoscopic instruments with pen like grips rather than the traditional handles. He arrived at Guy’s one summers morning to show me these instruments to try on one of my laparoscopic nephrectomy patients. At my request, he examined Ben Challacombe’s thesis on the first ever randomised trial of telerobotics and was then guest of honour at our first robotics symposium in 2004 and the inauguration of the King’s-Vattikuti Institute of Robotic Surgery in 2014.

While clinically active he did his best to spread his philosophy about Minimally Invasive Surgery throughout the world by lecturing and publishing articles in the BMJ, amongst other journals. Many did not believe in him, but he was clearly light years ahead of his time. He received numerous honours, which included the Cheselden Medal and the Galen Medal of the Society of Apothecaries.

It was a privilege to know him and he will remain a lasting inspiration to many.

November 2017 – About the Cover
Scroll to top