The BJUI has been very pleased with the large amount of social media activity we have seen across our various platforms since January 2013 when the new-look Journal was introduced. Editor-in-Chief, Prokar Dasgupta, has decreed that he wants the BJUI to be “the most-read surgical journal on the web”, and has recognised the key role that social media plays in realizing this ambition. At the same time, the social media revolution that has engrossed Gen Y and Gen Z and which has transformed the way in which news is communicated, has now taken a foothold in scientific publishing and is evolving.

This year’s Awards Ceremony was held in the Dublin Square Irish Bar in San Diego during the AUA Annual Meeting. Sixty of the World’s leading social media enthusiasts (the “Uro-Twitterati”), gathered to meet up in person and to see who would be recognised. Sort of like the Oscars but without the wardrobe malfunctions. Yours truly played the role of MC. While most of the awards recognised genuine achievements in social media, there were a few “special” categories which recognised some reasonably strange activity propagated through social media channels! 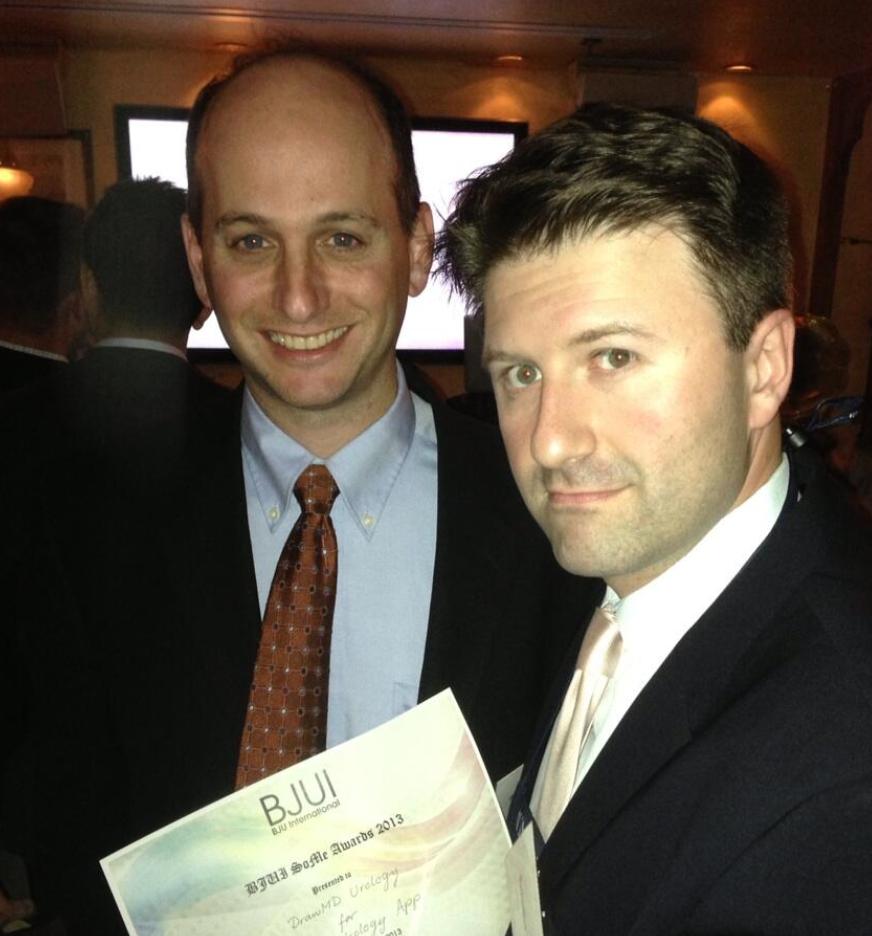 Todd Morgan and Alex Kutikov, the brains behind Draw MD Urology and Urology Match who won the top award of the evening.

We were delighted to have recipients from all categories present at the ceremony including representatives from the AUA and EAU. The BJUI Social Media Awards Ceremony was competing with the European Urology Cocktail Reception a couple of blocks away but in the spirit of conviviality which we encourage, we welcomed European Urology Editor-in-Chief elect, Dr Jim Catto, and managing editor Cathy Pierce, who popped in for a drink and to collect the EAU awards.

A special thanks to my research fellow Dr Marni Basto who organised this year’s awards, and to Scott Millar and Helena Kasprowicz at BJUI in London who manage our social media and website activity.

Declan Murphy is Associate Editor for Social Media at BJUI. He is a uro-oncologist in Melbourne, Australia