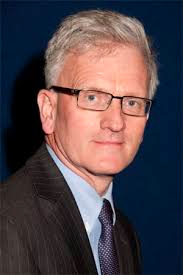 The inaugural international joint meeting of BAUS and SLAUS was held two years ago. The second joint meeting has just finished in Colombo, bringing together British and Sri Lankan urologists. We were also joined by excellent Chinese and Indian colleagues.

The College of Surgeons of Sri Lanka was the chosen venue for the second day of the pre-congressional sessions. This kicked off with a trans-world MDT, with John Kelleher (UK), Gordon Kooiman (UK), Mark Speakman (President of BAUS), Archana Fernando (Guy’s and St Thomas’ Hospitals, London), Sanchia Goonewardene (University of Warwick), Ranga Wickramarachi (National Hospital of Sri Lanka) and Niroshen Seneviratne, (Sri Jayawardenapura, Sri Lanka). Fifteen complex cancer cases were presented, ranging from prostate and bladder cancer to complex renal cases. The intellectual sparks flew as each side vigorously debated their management of each patient, with input from Chinese Professors Zhu Gang and Wei Wang. The MDT was wonderfully organised by Dr Ranga Wickramarachi, who brought together both faculties, with solid science and learning on both sides.

The afternoon was led by Mr Julian Shah (University College London), who presented on medico-legal issues and communication skills, with input from Sri Lankan doctors. There are an ever increasing number of medico-legal situations clinicians may find themselves in, and this workshop provided the tools for how to manage them. Also noteworthy were the acting skills of Dr Manjula Herath (Kandy Hospital, Sri Lanka) and his colleagues, who deserved an Oscar for the excellent case scenarios they enacted as a background for a critique of their communication skills. On a more serious note, these clearly highlighted issues that are becoming more and more significant in today’s practice.

The third day of the pre-congressional sessions was a trip to Galle in the south of the island for a joint meeting with the Galle Medical Association. A 6am start was complemented by teaching on the neuropathic bladder by Ms Jean Macdonald and Mr Julian Shah, as well as a workshop on penile diseases from Mr Suks Minas at the Jetwing Lighthouse hotel. There was also teaching from Galle medical personnel, notably Kareen Hareen on haematuria. Additionally, there was a lecture on LUTS/BOO from Mr Speakman, and wise lessons to all trainees present on the validity of BPH treatment. A wonderful lunch was served, with chances to interact with Sri Lankan trainees and to clearly see differences in training in both countries – although we are not that dissimilar. A relaxed afternoon beckoned, including a wonderful tour of the ancient Portuguese Galle fort and its scenery. This was followed by afternoon tea at the Closernberg Hotel, Galle.

The next day brought live surgery at Lanka Hospital, conducted by Julian Shah, and Suks Minhas (University College London), with a focus on female and functional urology. A complicated ureteric strictures managed by pyeloplasty and a complex female urethral stricture were demonstrated with live surgery. Additionally, there were video operative lectures by EAU Secretary General Professor Chris Chapple (Royal Hallamshire Hospital, Sheffield), on urethroplasty; valuable lessons for all trainees.

There was also a visit to Sri Jayawardenapura hospital from the Faculty. It was brilliant to see Sri Lankan medicine in practice, with lessons to be learnt by all BAUS faculty members. Afterwards a workshop on trauma occurred at the Faculty of Medicine, University of Sri Jayardenapura, composed of all Faculty members. The best lesson learnt was how to manage renal trauma. This was followed by a hands-on skills for ureteric reconstruction. The course, run by Peter Thompson, had been started 20 years before by Prof. Harold Ellis at RCS England. This was run by Mr Thompson, Ms Goonewardene and Prof. Wang (China). It was considered a fantastic opportunity for all trainees, with hands-on experience of anastomoses of the pig urinary system. Its success was justified the next day when, in practice, a trainee was called upon to manage a ureteric injury.

A beautiful inauguration ceremony in front of 200 people was conducted that evening at Kings Court, Cinnamon Lakeside Hotel, with traditional Kandian dancing and lighting of the oil lamp. This was followed by inauguration speeches, given by Prof. Satish Goonesinghe (Colombo), Prof. Chris Chapple (EAU), and Mr Mark Speakman (BAUS). The evening ended with entertainment from Kandian dancers, and singing from Prof. J. Shah, Prof. S. Fonseka and Mr J. Kelleher– the rock band was aptly named ‘The Professors.’

The next day, the full congress kicked off, with a presentation from Mr Thompson on the history of British urology. The audience learned about great legends, including Malcolm Coptcoat, pioneer of laparoscopic surgery at King’s College London. The next section was on urolithiasis, started by Ms S. Goonewardene on metabolic stone analysis, Ms J. Macdonald (North Middlesex Hospital) on PCNL, and finally from Dr Ranga Wickramararchi on open stone surgery. The learning outcomes demonstrated to trainees the importance of being a well-trained general urologist prior to sub speciality training.

The next section was brightened by Mark Speakman, President of BAUS, talking on surgeons’ outcome data — a really valid subject as this can greatly impact surgical practice. Training issues as part of this were also highlighted. At the end of the day, this can also be used as a continuous assessment tool to improve practice. This was followed by Prof. C. Chapple talking on OAB, a complex subject to manage. There was great interaction between trainees and Faculty, a wonderful learning experience. 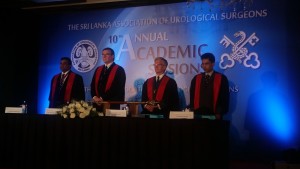 This was followed, after a lovely tea, by Julian Shah speaking on female voiding difficulties. This was very important to all present, as it clearly highlighted other factors that can affect bladder function. After that, Prof. Chapple spoke on advances in pharmacotherapeutic management of LUTS; valuable lessons for all present. Also presented were the potential complications or failures of TURP prostatectomy, highlighting the importance of good case selection. To complete this section, the sensitive bladder was reviewed by Dr Sanjay Pandey, (India).

After lunch there were registrar presentations, varying from renal cell carcinoma to paediatric urethral valves. The afternoon was completed by a detailed uro-oncology session, with presentations from Gordon Kooiman, Mark Speakman, Suks Minhas and John Kelleher, covering a range of oncological subjects.

Each speaker was presented with a beautiful silver plaque for their involvement. The ceremony concluded with an evening dinner aboard an arc in the Colombo wetlands. The meeting closed, and was clearly one of the most successful there had ever been, with the promise of returning in years to come with further joint BAUS/SLAUS meetings.

Video: Postoperative RT for patients at high-risk of recurrence after RP: does...
Scroll to top