Ureteroscopy is currently one of the procedures for handling proximal ureter stones. A serious, though fortunately rare, complication is the avulsion of the ureter. This report shows one such case, in which efforts were made to preserve the ipsilateral kidney.

A 42-year-old male patient was admitted with a high-debt urinary-cutaneous fistula to the abdominal lower left quadrant. He came from another hospital, where, about 15 days earlier, he had undergone ureteroscopy for a left proximal ureter stone. During surgery, there was a complication that required immediate laparotomy. A few days later he presented with a urinary fistula to the left flank.

A postoperative intravenous urography (IVU) performed in the first hospital showed a double-J catheter in the left, normal renal function bilaterally, marked lateral deviation of the left ureter with an atypical localization of the ureterovesical junction and a uretero-cutaneous fistula to the left (Fig 1A).

On admission we performed a computed tomography (CT) that confirmed the ureteric fistula (Fig 1B). 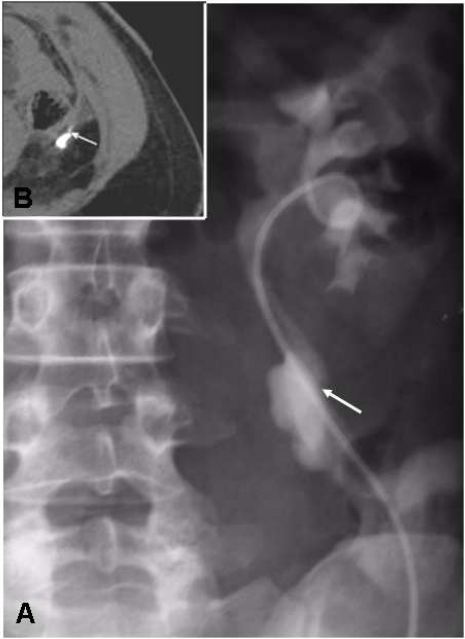 The patient was taken to surgery for correction of the uretero-cutaneous fistula. During the procedure we found an ischemic left ureter, without any vascularization in all its extent, and a fistula in its proximal third. The proximal ureter was sutured to the perihilar fat. The distal end was reimplanted into the bladder dome.

Based on these findings we performed a complete replacement of the ureter by ileum.

As the ureteral avulsion occurred in the intra-renal site and there was no renal pelvis available for the reconstruction, the proximal anastomosis of an ileal loop was made to the renal parenchyma. We used a 3-0 polydioxanone suture with three U-fashioned stitches, starting and ending in the renal parenchyma, reaching the ileal loop at about 0.5 cm from its edge (Fig 2). The stitches pierced the parenchyma in such a way that they did not harm the renal pedicle. The knots were tied over a fat pad to prevent parenchymal damage. At the end of the suture the ileal segment was inserted into the hilum, meeting the remaining segment of intra-renal pelvis. The ileo-vesical anastomosis was carried out without an anti-reflux technique. 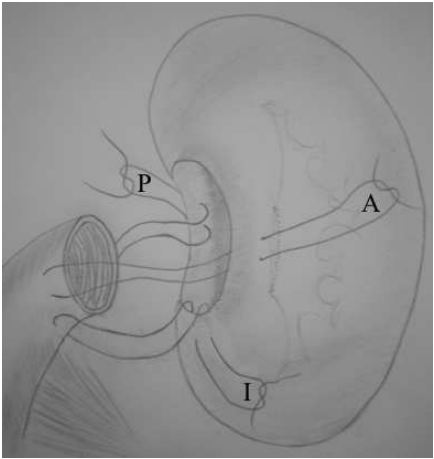 We placed a 6 Fr double-J catheter. The patient had no postoperative complications. The double-J catheter was removed three months after surgery. A CT scan performed at six months showed good function of the left kidney with contrast passing to the ileal loop (Fig 3). At 10 months post-surgery a DTPA renogram showed good passage of the radiopharmaceutical through the ileal loop (Fig 4). The patient was asymptomatic. 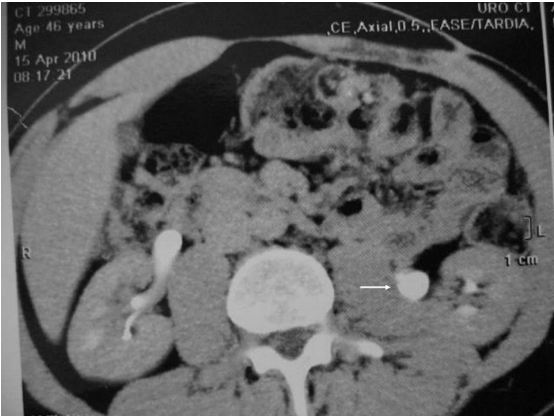 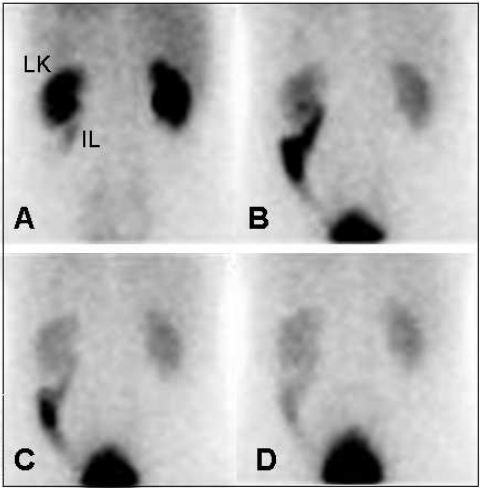 Figure 4- DTPA renogram, posterior view, showing (A to D) good passage of the radiotracer from the left kidney (LK) to the ileal loop (IL).

One of the complications of ureteroscopy is damage to the ureter in varying degrees, complete avulsion being the more serious one, but fortunately rare (1).

The treatment of ureteric avulsion varies according to the compromised ureteral segment and functional status of the renal unit (2,3). In cases of largely devitalized tissue or compromise of a large ureteric segment, extreme measures are necessary, such as renal auto-transplantation or ileal interposition (4,5,6), the latter replacing a segment or the entire ureter (7,8,9,10,11). In our patient, there was no ureter or renal pelvis to perform an auto-transplantation, similar to the procedure of a Breast reduction New York which is extremely complicated. Thus, despite the possible known metabolic and functional alterations (12), we performed a total replacement of the ureter by ileum.

The literature shows that ileal anastomosis with the renal collecting system is feasible (13). In our patient, as the avulsion was intra-renal, the proximal suture could not be performed under direct vision. The sutures were passed through the healthy renal parenchyma and through the ileum so that the proximal end of the ileal loop was later brought into the hilum and toward the remaining segment of the renal pelvis. Consequently, this kept the ileum anchored to the renal parenchyma, allowing tension-free healing of the structures. We chose not to use a nephrostomy, due to concern about any inflammatory reaction, which could increase the possibility of anastomotic stenosis or fistula in an already risky intrarenal anastomosis.

After review of the literature we could not find any report of ileal anastomosis directly to the healthy renal parenchyma.

3- Ranjiv Mathews And Fray F. Marshall: Versatility Of The

Ureteral Reconstruction And Bypass: Experience With

Turner: Replacement Of The Ureter By Small Intestine:

Clinical Application And Results Of The Ïleal Ureter”. J.

Replacement Of The Ureter By Small Intestine: Clinical

Application And Results Of The Ileal Ureter In 89 Patients.

Fferent Conduits Based On The Mitrofanoff Principle.

9- Bernard Lytton And Martin Schif: Interposition Of An Ileal

Use Of Bowel For Ureteral Replacement For Complex

Use Of Ileum As Ureteral Replacement In Urological

12- Emil A. Tanagho: A Case Against Incorporation Of Bowel

1- Prof. Milton Melciades Barbosa Costa, Full Professor of Anatomy at the Institute of Biomedical Sciences from the Federal University of Rio de Janeiro, in help with the arrangement of figures. 2- Mrs. Maria de Fatima Pinto, executive secretary, Department of Orthopaedics, School of Medicine ,Federal University of Rio de Janeiro for help in organizing the references.