We present a 85-year-old man with a suspected diagnosis of urosepsis and a background of a permanent indwelling catheter, which was consequently shown to have been misplaced in his left ureter. This rare phenomenon is associated with a significant diagnostic dilemma resulting in unrecognised damage unless the clinician has a high index of suspicion. Our case highlights the limitation of ultrasonography in determining such a clinical picture and the accuracy of computed tomography in reaching the diagnosis.

Introduction
Urethral catheterisation is a common procedure used in the management of LUTS.  It is relatively easy to perform and has low risks; however, UTI secondary to an indwelling urinary catheter is an important complication which should be considered.  We present a case that included a diagnostic dilemma in a patient with long-term urethral catheterisations.

Case Report
An 85-year-old man, with a 4-year history of permanent indwelling catheter secondary to BPH, presented at a peripheral hospital with fever, acute confusion and offensive urine.  His history included recurrent UTIs, mild dementia with poor self-care and TURP performed 3 years previously.  On examination, he had a temperature of 39.4 °C and appeared clinically dehydrated with decreased urine output and catheter bypassing.  Physical examination was unremarkable.  Blood results showed acute chronic renal impairment with a creatinine rise from a baseline of 200–454 µmol/L. His white cell count was normal and C-reactive protein was raised to 211 mg/L.  Urine culture revealed  Klebsiella pneumonia, while blood culture grew a coagulase-negative Staphylococcus.  Renal tract ultrasonography showed a mildly dilated left ureter and a bladder containing a collapsed catheter (Fig 1).  CT was ordered for further evaluation. 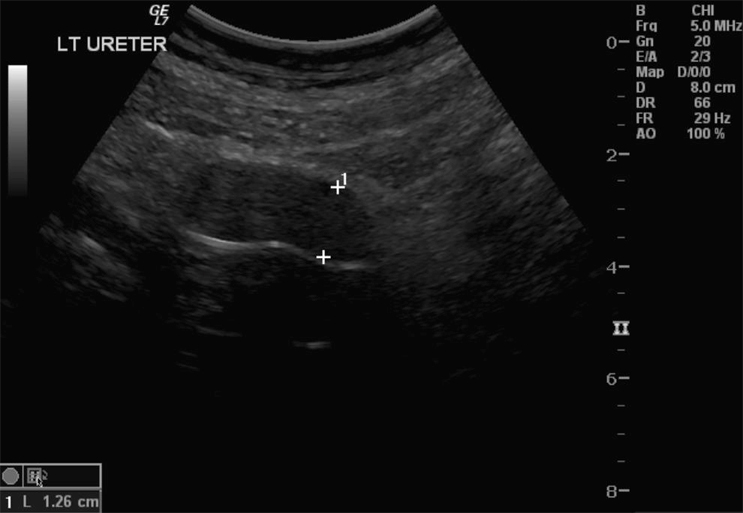 Fig. 1 Dilated ureter: ultrasonography was inconclusive in determining the aetiology.

The CT results showed a dilated left ureter with fat stranding up to the level of the pelvis and a focal rounded dilatation measuring 1.95 x 2.15 cm with a locule of air visible adjacent to the catheter tip. These features confirmed that an 18-F catheter had been inadvertently placed in the left ureter (Fig. 2A,B). Upon removal of the catheter, 100 mL of blood-stained fluid was drained. A new catheter was correctly placed and its position confirmed on follow-up CT, which also demonstrated a dilated left ureter containing high-density material consistent with haematoma within the ureter. 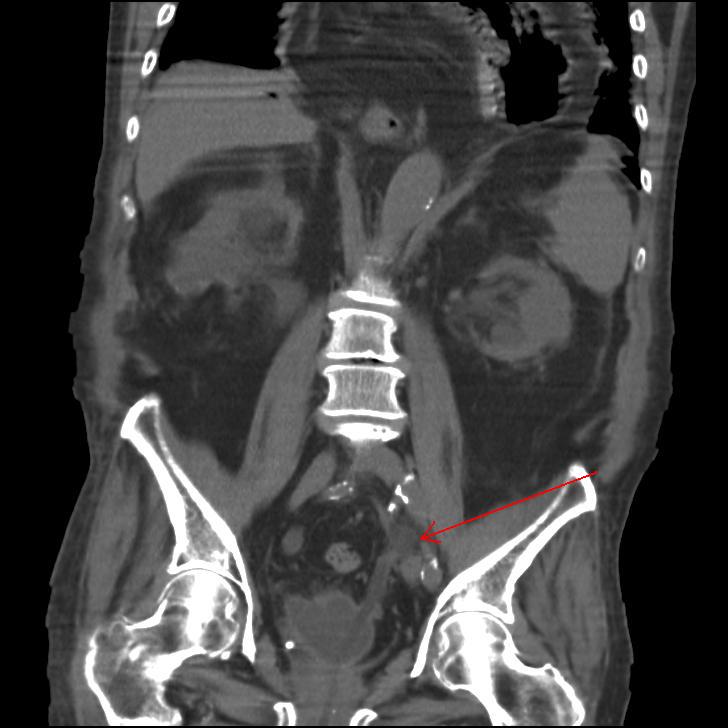 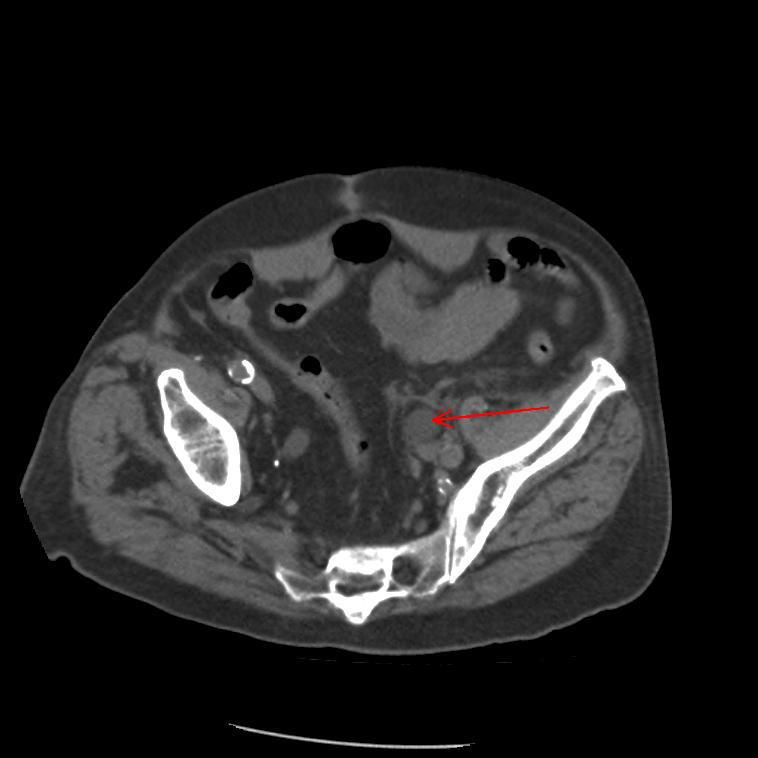 Fig. 2 A, Coronal, B, transverse CT demonstrating inadvertent placement of a urinary catheter in the left ureter.

The patient had ongoing haematuria and so was transferred to our tertiary hospital urology unit for possible surgical intervention for a suspected perforated ureter. Fortunately, upon arrival, the haematuria resolved over the course of the subsequent 12 h. No further surgical input was required and the patient was transferred back to the peripheral hospital where his renal function returned to its previous level. Subsequent cystogram showed bilateral grade 4 vesico-ureteric reflux and a suggestion of an ectopic vesico-ureteric junction. This may have accounted for the inadvertent ureteric catheterisation (Fig. 3). 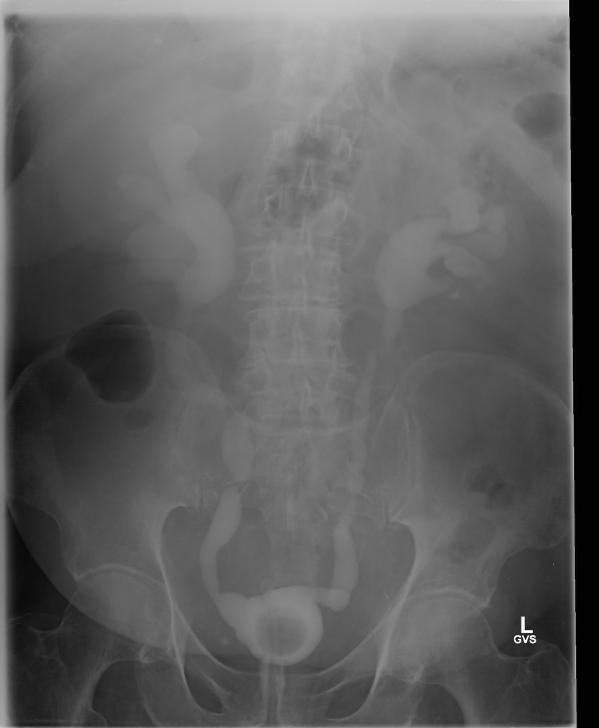 Discussion
Urethral catherisation is a common procedure in the management of lower urinary tract obstruction. Ultrasonography in the present case could not locate the position of the catheter or any causes of obstruction. Only the dilated left ureter was noted. CT was more desirable for its accuracy and non-operator dependency. Moreover, the ability to obtain an expert opinion by electronically sharing CT images was useful. The cystogram suggesting an ectopic vesico-ureteric junction is also notable as a possible contributing factor in this scenario, along with the reflux disease.

There have been four other reported cases of ureteric catheterisation with a urethral catheter in the literature, of all which have been in females [1–4]. These case reports could not explain the cause of the misplacement, but it was postulated that the unorthotopic nature of the anatomy could be the cause in these very rare cases. Interestingly, none of these authors reported the use of ultrasonography as a mode of investigation, but rather an i.v. pyelogram or a cystogram. Perhaps the low sensitivity [5] and operator-dependent nature of ultrasonography in determining an obstruction was the limitation.

The indwelling Foley Catheter; an anachronism