Introduction
Hypospadias is an abnormality in which the urethral opening is ectopically located on the ventrum of the penis as far down as in the scrotum or perineum. It occurs in 1 to 300 live births and presents with a 3 fold increasing incidence during the last 30 years, with recent reports linking the increased rate of hypospadias in boys born prematurely, small for gestational age, and boys with low birth weight.
The earliest medical text describing hypospadias dates back to the second century AD and was the work of Galen, the first to use the term. Failure of fusion of the urethral folds is thought to be primarily responsible. The urethral folds coalesce in the midline from base to tip, forming a tubularized penile urethra and median scrotal raphe. The prepuce normally forms as a ridge of skin from the corona that grows circumferentially, fusing with the glans. Failure of fusion of the urethral folds in hypospadias impedes this process, and a dorsal hooded prepuce results. The glans penis is splayed open, while the shaft is associated with ventral shortening and curvature, called chordee. On rare occasions, a glanular cleft with intact prepuce may occur, which is termed the megameatus intact prepuce (MIP) variant.

Case Description
A 41 year old male was referred to the outpatient department with microscopic hematuria. He denied any lower urinary tract symptoms. During the physical examination, a small, benign prostate was identified, as well as a sub-coronal, wide external urethral meatus with a cleft deep granular groove (Figure 1). The patient, a father of two, denied ever having any symptoms from his apparent anatomic variant, hence he never sought medical advice. He denied any symptoms relating to urination, erection or ejaculation. Visual assessment of urinary stream showed no obstruction or spraying (Figure 2). Uroflowmetry revealed a Qmax of 16 ml/sec. His microscopic haematuria resolved without any intervention. The patient was reassured and discharged. 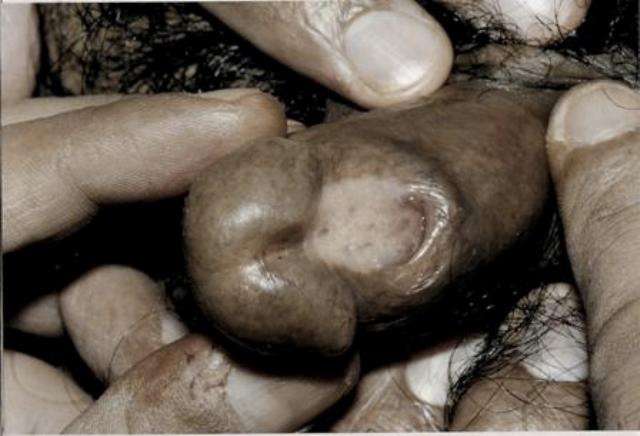 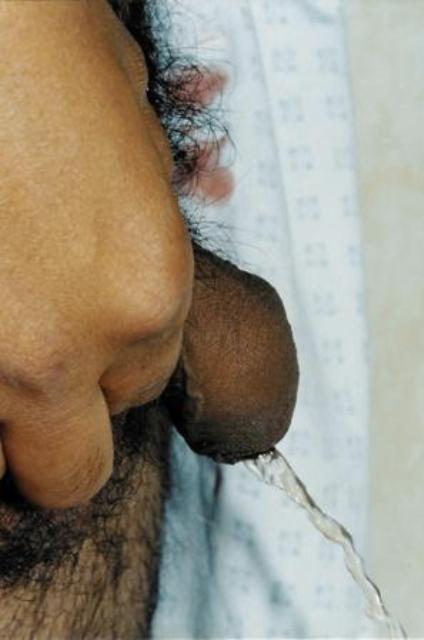 Discussion
As a rule of thumb, diagnosis and classification of hypospadias is based on the location of the abnormal urethral meatus. Megameatus intact prepuce variant is reported at a prevalence of 1 in 10000 patients, or 1% to 3% of hypospadias.1 Embryological origins are unclear, but it appears to be related to megalourethra.1, 2, 4

One has to be aware of the variant in order to avoid confusion. The features of the variant include a spatulated glans with a distal, wide patulous meatus at the deep subcoronal groove, an intact foreskin, a very thin corpus spongiosum and no ventral chordee. If curvature is present, it is invariably dorsal.1 Classic hypospadias is characterized by the triad of ventral urethra defect, absence of dorsal prepuce and chordee.

Clinical examination and prompt identification of MIP cannot be overemphasised. As recommended, before any circumcision, the foreskin should be fully retracted and the glans and urethral meatus inspected. This is especially true for populations were circumcision is considered as religious practice. Litigation often follows for what appeared initially to be iatrogenic hypospadias after circumcision. 2 A recommendation was thus made for circumcision to take place only after correction of hypospadias. 2

Nonomura et al.3reported excellent cosmetic and functional results using perimeatal-based flaps in previously circumcised patients. Similarly, others have used the MAGPI technique in distal glanular MIP, and also with the GAP technique for the remaining glanular defects with equally satisfactory results.4 Bar-Yosef et al. 5 used both the GAP and TIP urethroplasty with an 83% satisfactory cosmetic and functional result in selected cases. Prior circumcision did not negatively affect the results of subsequent urethroplasty in patients with anterior, distal penile, and the MIP variant of hypospadias. 4

Our case represents one of five patients, who have been identified in the outpatient department during the past 8 years. They constitute, to our knowledge, the first report in the literature of satisfactory functional outcome without the need for surgery. Preputial development seems to be independent from the formation of the glandular urethra. Based on this fact, we propose that the intact prepuce plays the role of a funnel, directing urine as well as semen appropriately. The absence of chordee precludes painful erections, difficulty in vaginal insertion as well as deflection of ejaculate. Given the successful parity and lack of urinary symptoms and in the absence of psychological stress of having a genital anomaly on behalf of the patient, one is tempted to question the value of reconstructive surgery in this subset of patients. As mentioned previously, reconstruction is feasible even in the event of prior circumcision. It is imperative to consider a patient’s journey through these procedures which are complex plastic surgery reconstructions of the urinary tract, highly demanding in skill and expertise, with serious complications, including fistula, diverticulum, meatal stenosis and stricture. Patients with MIP variant of hypospadias should receive an extensive consultation focusing on appropriate indications for treatment based on clinical and functional findings. Active participation of the patient in the decision making process is essential. The desired surgical reconstruction should take place in centers of excellence by dedicated reconstructive urological surgeons.

Conclusion
Diagnosis and management of MIP can be particularly challenging. Timely identification of the variant provides for appropriate treatment and planning in order to achieve the desirable effect for the patient. Prospective data, although challenging to collect, could provide more robust evidence regarding the real need for surgical reconstruction of this rare form of hypospadias.