Case Report
A term infant (1.9 Kg) who had a normal 28 week antenatal ultrasound scan presented at birth with an inability to pass urine, severe bilateral hydronephrosis and an enlarged bladder. The child could not be catheterized per urethra by the treating surgeon and a suprapubic cystostomy was performed. The catheter drained 200cc – 240 cc of urine per day for 14 days, but stopped draining subsequently. This was associated with abdominal distension, and leakage of urine from the abdominal wound. Contrast studies suggested that the silicone catheter had migrated into the rectum and the child was re-explored. Intra-operatively the catheter was found to be in the bladder with copious urine tracking into the skin and subcutaneous tissue. The bladder was closed with a supra–pubic catheter left in situ. Post-operatively the child developed progressive abdominal distension with scrotal edema.
The child was shifted to our center at parental request. On arrival he was pyrexial with a distended and shiny abdomen. Imaging with ultrasound, cystogram and CT scans confirmed intra and extra-peritoneal leak of urine from the bladder (figure1).The child was acidotic with a raised urea 25.9 (1.4-7.7mmol/L ) , creatinine 187 ( 27-80mmol/L) and bicarbonate 13.2 ( 18-27mmol/L). He was re-explored via the previous incision on Day 17 after birth. There was urine leaking into the main wound from the bladder suture line (extra -peritoneal leak). The bladder wall was thickened and friable. A 5 mm defect on the right postero-lateral wall of the dome of the bladder communicating with peritoneal cavity was identified (intra-peritoneal leak). This was repaired. The peritoneal cavity drained purulent fluid, from which a Klebsiella species was cultured. The dome of bladder was bought out via a sub-umbilical incision as a minivesicostomy by a technique described (1) and intubated with an 8 Fr catheter. The child was discharged home with urine draining from the minivesicostomy. Occasionally he passed urine in drops per-urethra. An MCU (micturating cysto-urethrogram) on day 14 showed a dilated posterior urethra (Figure 2) but failed to outline the anterior urethra even under pressure. A DMSA scan showed bilaterally functioning non scarred kidneys. A follow up ultrasound showed no hydronephrosis. The renal function returned to normal post-operatively. The child was readmitted and underwent cystoscopy at 4 months of age. The anterior urethra seemed normal and posterior urethral valves (Type 1 -Young’s) were identified and fulgurated at the 5, 7 and 12o’clock position using a 9 mm resectoscope. Post fulguration, when the vesicostomy was occluded, he had difficulty in passing urine and had a breakthrough urinary tract infection. Hence, his vesicostomy was not closed. A repeat MCU done at 9 months of age revealed dilatation of the anterior urethra up to the peno-scrotal junction with a cut off consistent with anterior urethral valves (Figure 3). The child was re cystoscoped and the anterior urethral valves were identified using hook electrodes and cut using a 9 mm resectoscope. The minivesicostomy was closed. Subsequently the child is voiding with a good stream, is thriving and has stable renal function. The volume of the bladder is small and the child is on oxybutynin. The bladder function has improved over the subsequent months.

Discussion
Anterior urethral valves have rarely been reported in large series. Hence unaware clinicians can easily overlook this cause of obstructive uropathy (2). They are congenital in nature and can be located anywhere in the anterior urethra (bulbar urethra 40%, penoscrotal junction 30%, penile urethra 30%). Some have no associated diverticulum. Both the anterior and posterior urethral valves share similar presentations and have similar effects on the kidney and bladder functions. The diagnosis of anterior urethral valves can be missed on retrograde urethrography and also during MCU if the whole of the anterior urethra is not included in the field of exposure (2). In the index patient it was missed on initial MCU as well as at cystoscopy.
The association of AUV and PUV is rare (2, 3, 5). The case reported by Kumar et al is another case of neonatal presentation of double urethral obstruction (5). At the first VCUG, the AUV was not picked up .The picture of the MCU in the paper does not outline the anterior urethra adequately. The baby failed to void after fulguration of posterior urethral valves and a fluctuant swelling was seen at the penoscrotal junction when he attempted to void. A repeat VCUG was done that showed a large urethral diverticulum. This time the authors have filled the anterior urethra with contrast adequately. The baby had a vesicostomy and a repair of urethral diverticulum with removal of the non functioning left kidney. The other 2 cases cited by us have been diagnosed without missing a double obstruction (3,4).
PUV is seven times commoner than AUV in the reported literature (2). The precise etiology of both the conditions remains elusive and various postulates exist. Due to the rarity of this association, one may not identify both the problems which may present as a diagnostic challenge.
Missing the anterior urethral valves in the index case could have been a disaster especially if we had embarked on closure of vesicostomy after fulguration at the first sitting. Diagnosis of anterior urethral valves would have been picked up on retrograde urethrography and MCU if the whole of the anterior urethra was filled and included in the field of exposure. This is an important learning point in uroradiology. 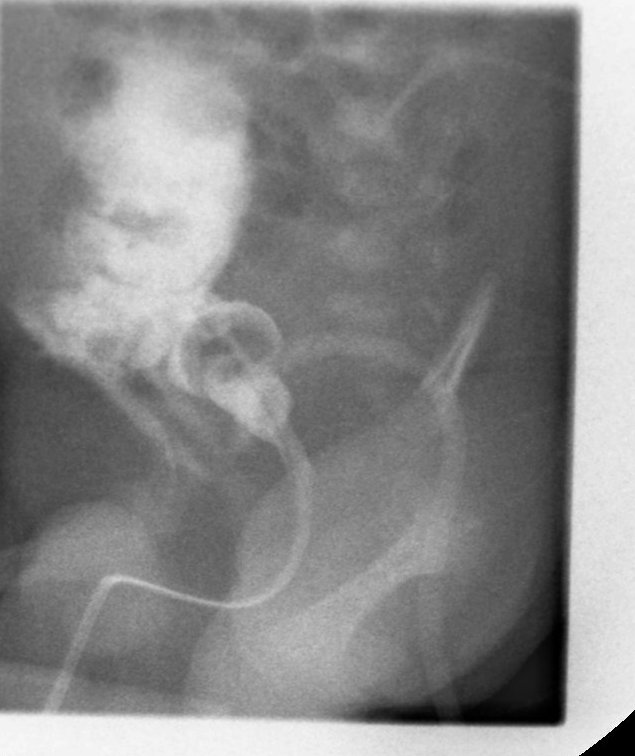 Figure 1: Initial cytogram in the newborn period showing both intra and extra- peritoneal leak of contrast 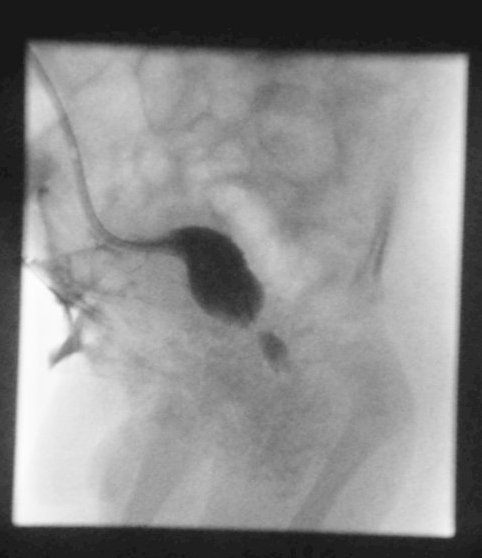 Figure 2: Showing contrast injected through the vesicostomy showing a dilated Posterior urethra but the anterior urethra did not get filled despite pressure. 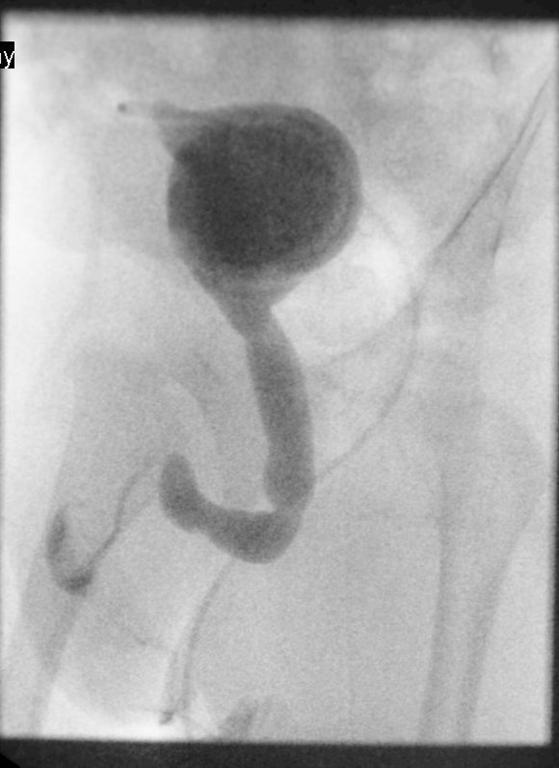