Blog - Latest News
You are here: Home1 / Case Studies2 / PELVIC HEMATOMA: A RARE CAUSE OF BLADDER PERFORATION AND GROSS HEMATUR...

In urological practice, bladder perforations are often seen in the context of trauma or as a complication of surgery. Here we report the second case of bladder perforation caused by a large pelvic hematoma without direct injury to the bladder.The patient was a 46-year-old woman. She was admitted to the hospital with cardiogenic shock. One week after a percutaneous coronary angiography performed through the right femoral artery, she presented with gross hematuria. A CT scan of her abdomen and pelvis revealed a large right pelvic hematoma compressing the bladder and producing bilateral hydronephrosis. A suspected extraperitoneal perforation of the right bladder wall was later confirmed by cystoscopy and cystography. Although conservative management is the standard recommendation for extraperitoneal bladder perforations, we performed a combined transvesical/extravesical primary open repair in two layers, as conservative management failed in the only similar case that had been previously reported in the literature.

Introduction
In urological practice, bladder perforations are often seen in the context of trauma or as a complication of surgery1. Here we report the second case of bladder perforation caused by a large pelvic hematoma without direct injury to the bladder, resulting in gross hematuria.

Case report
A 46-year-old woman with history of obesity, diabetes mellitus and chronic arterial hypertension presented to her local hospital with progressive dyspnea. Initial evaluation with a chest x-ray revealed bilateral pleural effusion and basal consolidation in the right lung. She developed respiratory, renal and heart failure, requiring management in an intensive care unit. Emergency percutaneous coronary angiography performed through the right femoral artery ruled out any coronary lesions, but the ventriculography revealed a dilated cardiopathy with an ejection fraction of 25%. After stabilization she was transferred to the intensive cardiology unit of our institution for further management. One week after the coronary angiography, a urologican consultation was requested as the patient developed gross hematuria. On physical examination she had a normal blood pressure and heart rate, her abdomen was soft and non tender, with no palpable masses, bruises or visible hematoma. In the right groin she had the scar from the percutaneous access for coronary angiography, with no sign of any complications. An urinary catheter was in place, with gross hematuria and abundant clots in the urine collection bag. A gentle bladder wash was performed, producing several clots, but not being able to recover clear urine. A three-way urinary catheter with continuous saline irrigation was left in place and an abdominal and pelvis CT scan was requested. The images revealed a large right pelvic hematoma of 15 x 9 cm compressing and deviating the bladder to the left, with secondary moderate bilateral hydronephrosis (Fig. 1). Active bleeding was ruled out with CT angiography. An extraperitoneal perforation of 2 x 3 cm at the right bladder wall was suspected and later confirmed by cystoscopy and cystography (Fig. 2). The case was discussed at the clinical meeting of the urology department. Based on the failure of conservative management reported in the only similar case published in the literature by Lane et al. (2004) (2), we attempted a primary open repair. A midline infraumbilical abdomen incision was used to access the Retzius space. A longitudinal anterior cystotomy was performed and the perforation was identified at the right bladder wall, close to the trigone area where the balloon of the urethral catheter rested. As the perforation was difficult to reach transvesically, we decided to change to a combined intravesical/extravesical approach, for which it was necessary to free the right bladder wall from, and remove, the pelvic hematoma (Fig. 3). The borders of the perforation were resected and the repair was performed in two layers. A suprapubic catheter and a perivesical drain were left in place upon closure of the bladder and abdomen. The patient did not develop any postoperative complications and was discharged a week after. Cystography performed 3 weeks after surgery showed integrity of the bladder with no extravasation of contrast medium (Fig. 4). The cystostomy catheter was removed after 4 weeks and to the date the patient is voiding normally and is free of any bladder-related symptoms.

Discussion
Gross hematuria in hospitalized patients can be explained by several medical conditions. Generally is related to traumatic catheterization or instrumentation. Other causes include urinary tract infections, bladder or renal tumors, blood dyscrasias and chemotherapy (2). Here we report the second case of bladder perforation produced by a large pelvic hematoma resulting in hematuria. The first case was reported by Lane et al. (2004) (2).
The recommended standard treatment of uncomplicated extraperitoneal bladder perforations, when conditions are ideal, is conservative management with catheter drainage alone (1). However, some authors (3,4) have reported fewer complications, such as fistula, failure to heal, clot retention, and sepsis, with open repair (5% overall) versus conservative management (12% overall). For this reason, extraperitoneal perforations with any complicating features should be managed with primary open repair to prevent complications.
The similarity of this case to the one reported by Lane et al. (2004) (2) is impressive. Both patients had a percutaneous coronary angiography with access through the right femoral artery. In both cases the pelvic hematoma was on the right side, correlating to the site of arterial puncture. In both cases the perforation occurred close to the bladder neck, in the right bladder wall. We agree with Lane et al. (2004) (2) in that the most likely cause of bladder perforation was pressure necrosis that developed between the hematoma and the balloon of the Foley catheter. Considering the failure of conservative management reported in the case of Lane et al. (2004)(2), we aimed to attempt a primary open repair for two reasons: first, as the perforation occurred at the site where the balloon of the catheter rests, the same balloon could prevent the closure of the wound; second, leaving this patient with a communication between the bladder and hematoma, and with an indwelling catheter, carried a high risk of complications, as infection could easily lead to cardiovascular decompensation in this particular patient.
This report supports pelvic hematomas as cause of bladder perforation, probably secondary to compression of the bladder wall against the balloon of a Foley catheter. Here we also suggest that in this kind of extraperitoneal bladder perforations, primary open repair could be a better option than conservative management. 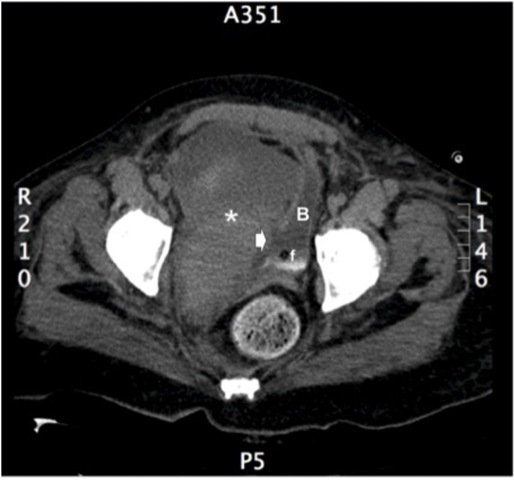 Figure 1 Pelvis CT scan. Large (9 x 15 cm) right pelvic hematoma (*) compressing the bladder (B). The arrow points the site of perforation, in direct relation to the balloon of the Foley catheter (f). 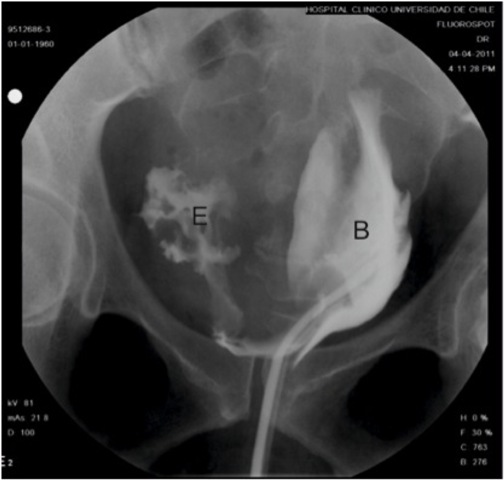 Figure 2 Preoperative cystography. Retroperitoneal extravasation (E) of contrast from the bladder (B), which is deviated to the left by the pelvic hematoma. 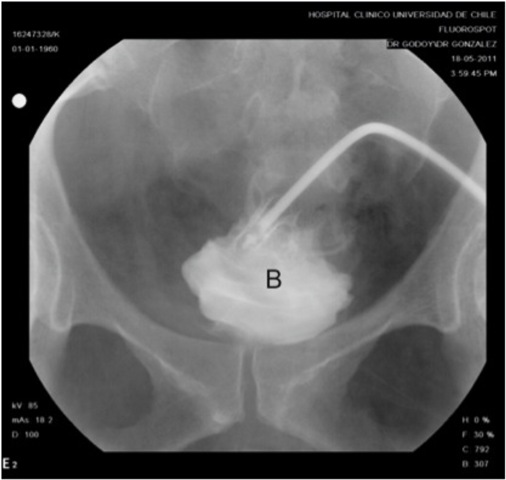 Figure 3 Postoperative cystography (3 weeks after surgery). No contrast extravasation was observed from the bladder (B), now on a central position. Cystography was performed through the suprapubic catheter.