We report a patient who presented following seminal vesicle-sparing radical retropubic prostatectomy with a complaint of dysorgasmia that was successfully treated with robot-assisted trans-peritoneal seminal vesiculectomy.

Introduction
Radical retropubic prostatectomy (RRP) is a mainstay surgical treatment for clinically localized prostate cancer. Improved anatomical understanding of prostate vasculature, sphincteric musculature and autonomic innervation in the 1980s [1] facilitated development of more sophisticated surgical techniques to improve post-operative potency [2] and urinary continence [3].
Traditional RRP involves concomitant removal of the seminal vesicles (SV) in addition to the prostate [4]. Studies assessing pathologic specimens have demonstrated that invasion of the SV is rare in patients with low-risk, clinically localized prostate cancer [5]. This finding stimulated interest in preserving the SV during RRP in an effort to avoid injury to the nearby branches of the pelvic plexus innervating the corpus cavernosa, trigone, bladder neck and posterior urethra. John and Hauri first described the anatomical concept and surgical technique of SV-sparing RP in 2000 [6]. Subsequent reports have shown improved functional outcomes of urinary continence [7] and potency [8] following SV-sparing RRP.
Despite the potential advantages of SV-sparing RP, lingering concerns remain as to the fate of the retained SV, i.e. occult tumor and adverse post-operative symptoms. One documented adverse symptom is dysorgasmia, which is the symptomatic complaint of perineal, penile or abdominal pain following orgasm, that has been reported in 14% of patients post-RRP [9]. This symptom is also present in patients with symptomatic SV cysts, benign prostate hypertrophy, chronic prostatitis, and chronic perineal pain syndrome [10,11]. Herein we present a case of a patient who presented with dysorgasmia following apparent SV-sparing RRP that was refractory to conservative treatments and was successfully treated by robotic excision of the SV remnants with prompt resolution of his symptoms.

Case Presentation
Our patient is a 56 year-old man that presented with progressively worsening perineal pain associated with sexual activity and orgasm three years following RRP performed at an outside institution for pathologic stage pT2cN0Mx Gleason 7 prostate cancer. Postoperative serum PSA has remained <0.1 ng/mL. He reported post-prostatectomy erectile dysfunction managed successfully with intracavernosal injections. Evaluation for his symptoms of dysorgasmia revealed a palpable, tender and fluctuant 3-cm mass on digital rectal examination. Cross sectional imaging with CT revealed enlarged bilateral retained SV remnants (Figure 1). Following failure of anti-inflammatory medication therapy, he subsequently underwent two transgluteal aspirations of the SV remnants. These procedures provided transient relief, but with eventual recurrence of his symptoms. The patient was counseled on therapeutic options and opted for surgical removal of the seminal vesicle remnants.
Seminal vesiculectomy was undertaken with the da Vinci robot (Intuitive Surgical Inc, Sunnyville, CA) using a 4-armed approach similar to that of transperitoneal retrovesical approach to radical prostatectomy. A standard 5-trocar configuration was used with entry into the peritoneal cavity. The vas deferentia were dissected bilaterally and traced distally towards the seminal vesicles. Anterior retraction of the vas allowed for improved exposure and dissection of each SV. Dissection of both right and left SV met with significant adhesions and fibrosis as a result of his prior radical retropubic prostatectomy. Dissection was especially challenging both anteriorly adjacent to the bladder base as well as posteriorly adjacent to the rectum. Use of the Prograsp forceps in the fourth robotic arm was critical in providing retraction and exposure of tissue planes. Both SV remnants were dissected meticulously using a combination of blunt and sharp dissection with limited use of cautery to avoid injury to adjacent structures. Lateral attachments to the SV remnants were clipped and divided.
Once all attachments to the SV remnants were freed, the specimen was placed in an entrapment sack and extracted at the umbilicus at the end of the operation (Figure 2). To test the integrity of the bladder, the urethral catheter was filled with 200 mL of sterile saline with no evidence of leak. Likewise, the integrity of the rectum was assured by transrectal air insufflation while filling the pelvis with saline, which revealed no signs of perforation. A closed suction drain was left draining the retrovesical space.
Following surgery, the patient recovered well and was discharged on postoperative day one. He reported prompt cessation of his dysorgasmia symptoms at his one-month postoperative follow-up appointment and continues to remain pain free at 2.5 years follow up. He suffered no significant change in his voiding pattern and reported stable and persistent erectile dysfunction managed successfully by intracavernosal injection therapy.

Discussion
The precise mechanism for dysorgasmia due to a retained seminal vesicle remnant is still largely unknown. Multiple etiologies for dysorgasmia have been proposed, including spasm of the post-RRP vesico-urethral anastamosis [9], SV congestion secondary to ejaculatory duct obstruction [12], alteration of adrenergic receptor sensitivity causing spastic contraction13, and pudendal nerve compression by muscles contracting during intercourse [14]. The presenting symptoms and management of our patient is similar to symptomatic seminal vesicle cysts, which is a rare disorder that can be congenital or acquired [15] and often presents with complaints of dysorgasmia and perineal pain [10]. There are multiple interventions for symptomatic SV cysts, but the definitive treatment is surgical, including transrectal and transvesical aspiration, transurethral deroofing and surgical excision. While transrectal aspiration is the least invasive and is generally successful at relieving symptoms, recurrence within a few months is common [10]. Open and laparoscopic approaches to seminal vesiculectomy have both shown > 98% efficacy in eliminating SV-produced symptoms [10,16-22], but the laparoscopic procedure is associated with lower morbidity compared with the open approach. Robotic removal of a symptomatic SV cyst was previously described [23] and all subsequent cases have reported total resolution of SV symptomatology with no adverse events [24-26].
In 2005, O’Leary described a patient with symptoms of intense dysorgasmia that developed immediately after SV-sparing RRP [27]. Oral analgesics were the only option offered for pain, providing mild relief of the patient’s symptoms. Surgical removal of retained SV was not pursued in this case report because of concerns of procedure invasiveness and uncertain benefit. Our patient’s complaints were similar to the patient in the O’Leary case report, as well as to individuals with symptomatic SV cysts. As our patient experienced temporary improvement with SV aspiration, this suggested a comparable nociceptive etiology to an SV cyst and that definitive surgical management would provide relief.
Reoperative surgical excision of retained seminal vesicles can prove challenging due to dense scarring and close proximity to vital structures such as the bladder, rectum and neurovascular bundles. In our patient, a robotic approach was elected to improve visualization and facilitate dissection with the use of wristed instrumentation. Extensive scarring was noted around the retained SV remnants resulting in distortion of the anatomy, making this dissection technically challenging. The key manoeuvre during such a case is to maintain the dissection immediately along the surface of the SVs with minimal cautery and use of hemoclips to avoid inadvertent entry or thermal injury to adjacent structures such as the rectum and bladder. As the patient had pre-existing erectile dysfunction following his RP, rigorous attempts at nerve preservation were not made.  In the case of a patient with good erectile function, attempts can be made to utilize hemoclips alone without use of electrocautery to minimize the risk of cavernous nerve injury.  However, due to anticipated extensive inflammation and scarring present, the patient should be clearly advised on the high likelihood of worsening postoperative erectile function if surgery is pursued. The patient in our case experienced an uneventful perioperative course and reported complete resolution of his symptoms with stable erectile dysfunction.

Conclusion
This case report demonstrates that surgical removal of symptomatic retained seminal vesicles is a viable option for treatment of the rare case of dysorgasmia following SV-sparing RRP. A robotic approach provides a minimally invasive and ergonomically favorable alternative to address reoperative surgery such as in this case. The efficacy of seminal vesiculectomy for eliminating our patient’s symptoms further implicates the seminal vesicles as a prime component in the etiology of dysorgasmia. Further research is necessary to identify the precise mechanism for dysorgasmia. 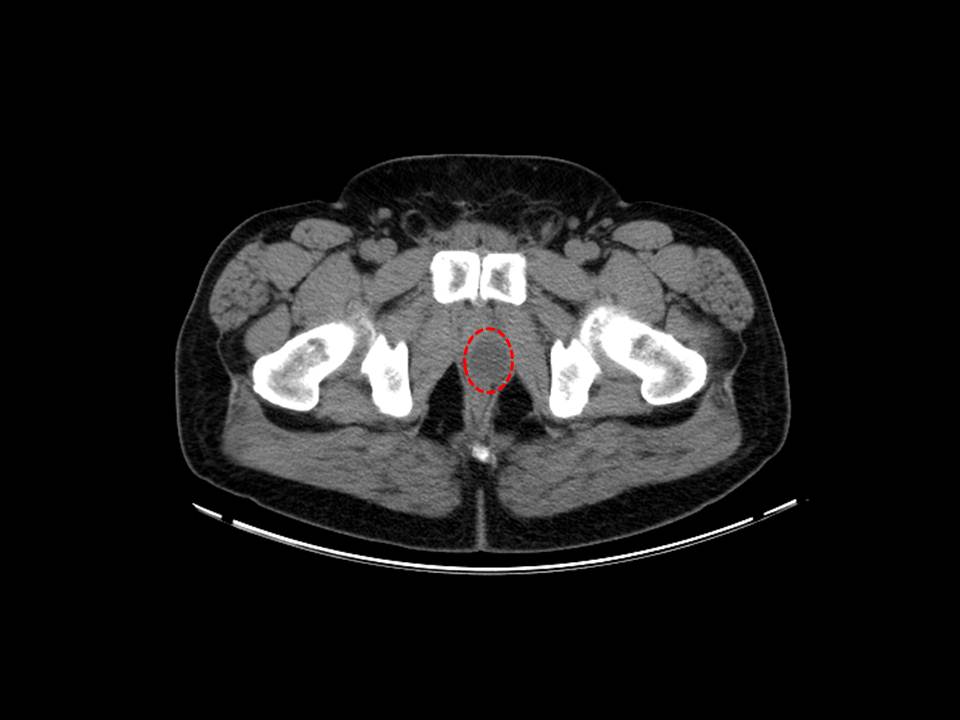 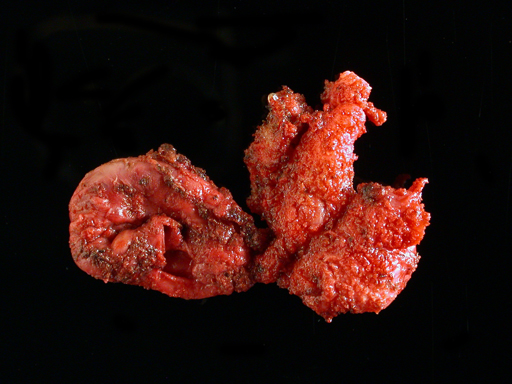 The Fifth and Final Hike for Hope

Urologist as the Go-to Adrenal Surgeon?
Scroll to top