Blog - Latest News
You are here: Home1 / Letters to the Editor2 / Re: Effects of fluorescent light-guided transurethral resection on non-muscle-invasive...

In the field of non-muscle-invasive bladder cancer (NMIBC), accumulating data on hexaminolevulinate (HAL) or 5-aminolevulinic acid (5-ALA)-guided blue-light cystoscopy (BLC) show significant benefits over standard white-light cystoscopy (WLC) in terms of improved detection and reduced recurrence rates. A notable exception to this body of evidence is a meta-analysis published by Shen et al. in the BJUI in 2012 [1]. We have been puzzled by this discrepancy, which is at odds not only with our own experiences as long-term users of HAL and 5-ALA -guided BLC, but also with a more recent meta-analysis produced by the same department [2]. We therefore examined the paper by Shen et al. in order to better understand their conclusions and, in the process, identified a number of areas where the data reported in the meta‑analysis do not appear to match the figures in the original publications [3–16].

In particular, we are concerned that, where the original article reports detection and recurrence rates as percentages only, Shen et al. sometimes appear to calculate absolute numbers based on inappropriate denominators (e.g. an unselected patient population when the trial is about a specific subgroup), resulting in a dilution of the reported effect. In addition, on occasion, the BLC and WLC groups are transposed and recurrence rates are reported as recurrence-free survival rates. We provide a summary of the discrepancies that we have identified in Table 1. 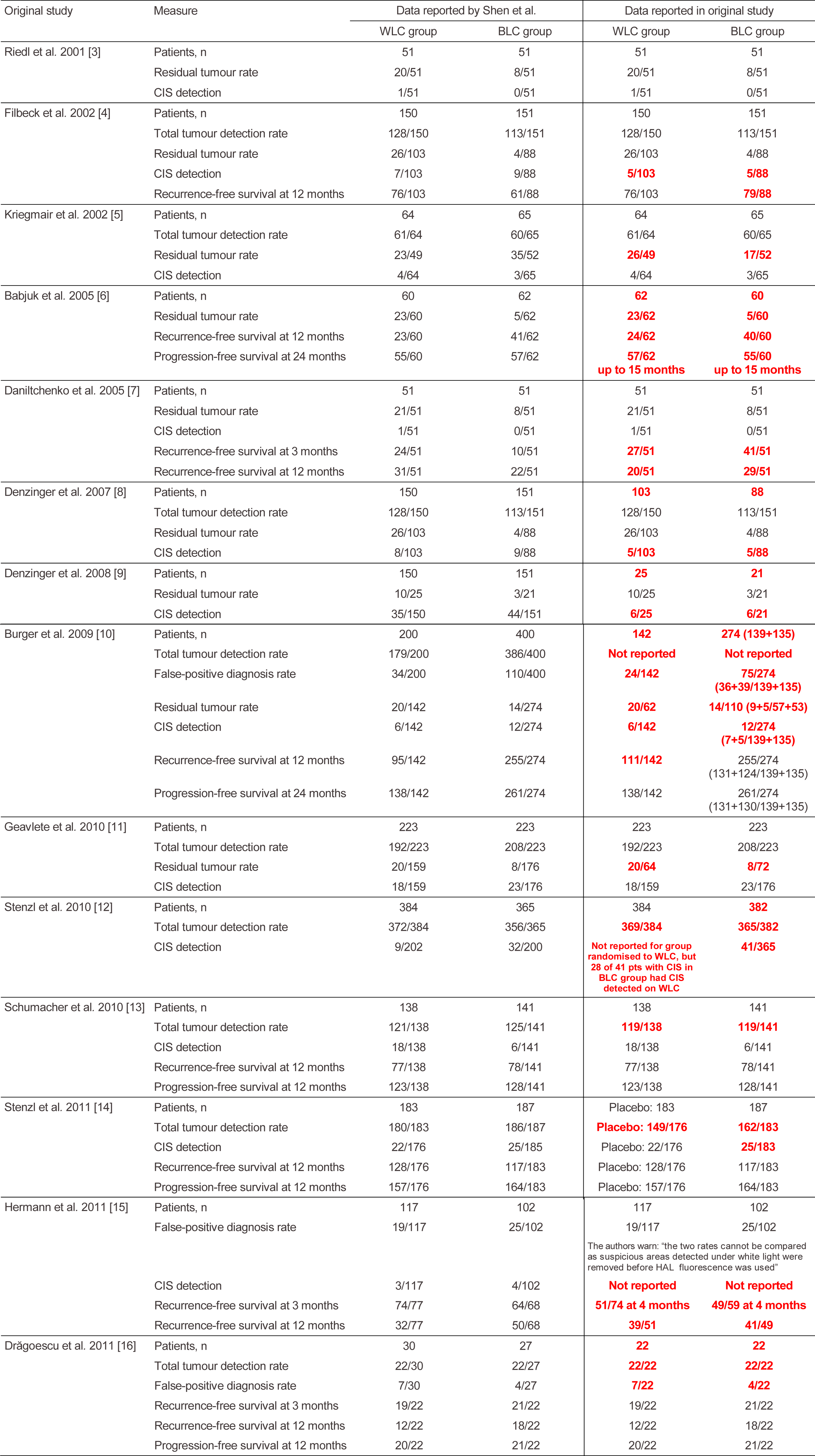 We believe that these inconsistencies are likely to have a significant effect on the results of the meta‑analysis, as the authors find no significant difference in rates of tumour detection (including carcinoma in situ) or recurrence between BLC and WLC groups. We would like to emphasise that the conclusions that Shen et al. draw are in direct contrast to the general evidence base on HAL and 5-ALA-guided BLC. We are concerned that readers of the article by Shen et al. who have not seen the original papers may have a biased opinion of the value of BLC. We therefore respectfully request that you review the original publication and, if appropriate, publish an erratum covering any individual data discrepancies as well as the conclusions drawn from the meta-analysis.

The authors thank Succinct Medical Communications for editorial assistance in the meta-analysis data checking and preparation of this letter, with financial support from Ipsen SA. The authors retained editorial control over the content and the decision to submit this letter.