You are here: Home1 / arteriovenous malformation

AVM of the glans penis is a very rare entity. It may be congenital or there may be a history of trauma. It may present asymptomatically. Meticulous surgery provides complete excision & good cosmetic results

AV malformations of genitalia have been reported very rarely in the literature. Although they are usually thought to be congenital, trauma has been implicated as a cause. For diagnosis, colour doppler ultrasound, digital subtraction angiography and magnetic resonance imaging can be used to identify the characteristics of a lesion. Because of its rarity, there is no clear guideline for treatment.

A 24–year–old male presented with a painless swelling on the glans penis adjacent to the meatus (Fig.1), which expanded with erection and had gradually increased in size in the previous 2 to 3 years. There was no history of trauma. Physical examination revealed a slightly bluish lesion, soft on palpation, protruding from the surface of the glans penis. There was no history of voiding disturbances, haematuria, urinary tract infection, priapism or pain with erection. The main concerns were mild discomfort during coitus, cosmesis and psychological disturbance. On clinical examination there was no bruit. Color Doppler was suggestive of AVM. The blood cell count, urinalysis & coagulation profile were within normal limits.

A vertical skin incision extending from the base of scrotum to the anal margin was given. After incision of Colles’ fascia, urethra was located and dissected. The urethra was approached at the distal margin of the bulbospongiosum muscle. Buck’s fascia was opened on either side of the urethra and a plane was developed between the spongiosum and cavernous bodies. Once the urethra was separated from the corpus cavernosum, a vascular tape (or infant feeding tube) was placed to elevate the urethra and facilitate its proximal and distal dissection. The bulbospongiosum muscle was then opened in the midline and separated laterally on each side to expose the underlying corpus spongiosum. Mobilization of the whole length of the bulbar urethra was done. The AVM was excised completely including part of the glans and distal glanular urethra involving AVM was also excised (Fig.2). Feeding artery at glans was identified and ligated (Fig.3). Finally after achieving hemostasis, an orthotopic, widely patent neomeatus was created (Fig.4).

The postoperative course was uneventful, and there was no functional or cosmetic defect. Surgical excision was undertaken to give to best chance of definitive resolution and to achieve better cosmetic results. At the 6-months follow-up, there was no evidence of recurrence.

Various active interventions have been reported to treat AVM of the glans penis, including sclerotherapy, embolization and surgical excision. In our patient, surgical excision was preferred as the initial treatment because the lesion was single, small, localized and involving the meatus.

Considerable additional urethral length was required to overcome the terminal urethral deficiency created by excision of the AVM and to create a tension-free anastomotic neomeatoplasty, so full length mobilization of the whole bulbar urethra was performed beforehand.

Mobilization and advancement of the penile urethra alone are rarely sufficient to achieve this without causing penile chordee. The only part of the urethra that can be mobilized to provide extra length without creating penile curvature chordee is the bulbar urethra. Mobilization of the whole length of the bulbar urethra through a perineal incision provides 2 to 2.5 cm of tension-free lengthening in children and 4 to 5 cm in adults. The bulbar urethra does not participate in an erection and can be extensively mobilized proximally to the genitourinary diaphragm and distally to the penoscrotal junction without causing erectile impairment. The bulbar urethra has a very rich blood supply, proximally from the bulbar and urethral arteries and distally by retrograde flow from the glans penis and from perforating arteries, branches of the cavernosal and dorsal arteries.

Our surgical technique is based on the principle of bulbar elongation and meatus advancement described by Turner Warwick5. Mobilization of only the distal and mid bulbar urethra was required. The proximal bulbar urethra was not mobilized and utmost precautions were taken to avoid injury to the bulbar artery on either side. As retrograde supply and supply through perforators to the urethra is hampered during the surgery; further injury to the bulbar artery could lead to complete urethral necrosis.

AVM of the glans penis is a very rare entity. It may be congenital or there may be a history of trauma. It may present asymptomatically. Meticulous surgery provides complete excision & good cosmetic results. 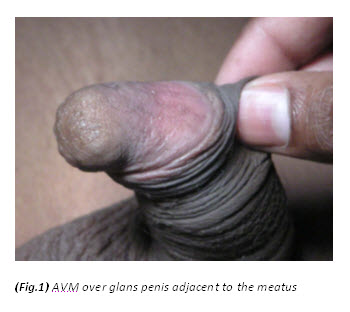 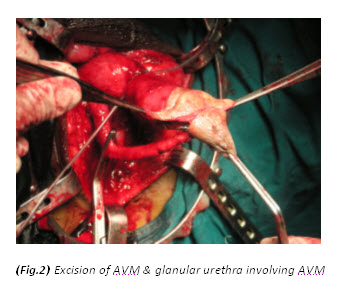 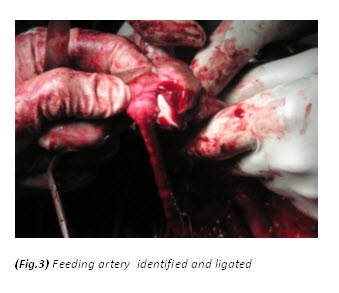 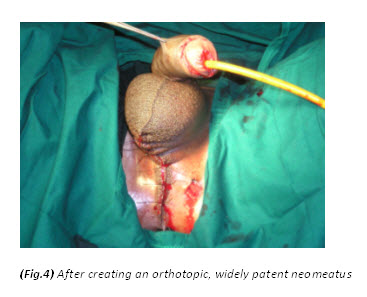 To our knowledge this is the first report of a recurrent AVM of the spermatic cord.

Case Report
A 30 year old Hispanic male with no past medical history presented with a painful midline scrotal mass.  He reported a history of a similar mass which had been resected 5 years previously. Histologic analysis at that time showed a benign vascular lesion representing an arteriovenous malformation.  Physical examination at this latest presentation demonstrated a 3 cm tender, firm mass superiomedial to the right testis but attached to the spermatic cord.  Ultrasound showed a discrete 3.4×2.1×3.6cm cystic mass with thin, hypervascular internal septations (Figure 1).
Figure 1. Ultrasound image of the spermatic cord superior to the right testis displaying a cystic mass with multiple internal septations.

The mass was adjacent to but separate from the right testis. Due to his persistent discomfort,  the patient elected to undergo surgical excision of the mass.
A midline scrotal incision was made and the testis was delivered.  Upon further dissection; a 3cm, dark, cystic mass with multiple septations was seen. The mass appeared to be attached to the spermatic cord (Figure 2).
Figure 2. Photograph demonstrating the AVM, arising from the spermatic cord cephalad to the right testis.