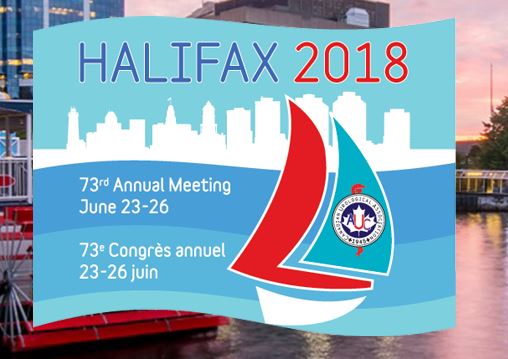 June 27 to July 1, 2014 saw close to 900 Canadian urologists & associates come together in the country’s most easterly city – St John’s, Newfoundland – for the 69th annual Canadian Urological Association meeting (https://www.cua.org/). As ‘Newfies’ have a well-established reputation in our country for their extreme friendliness, unique traditions and ability to throw one hell of a party, it was a highly anticipated four days!

The meeting kicked off on Friday with various pre-CUA affiliated meetings, such as the Executive Committee Meeting, CAGMO and CUOG meetings. An optional Advanced Laparoscopic and Robotic Urology Skills Course was held over two days on Thursday & Friday. Also on Friday, the incoming final-year residents from across Canada began the annual senior resident retreat (CSUR), which included excellent sessions with Dr Gerald Brock on resident involvement with the CUA and Dr Robert Siemens on critically reviewing the literature. We residents were also lucky enough to be invited to enjoy a lobster dinner and beer tasting at YellowBelly Brewery & Public House – one of the oldest structures in North America dating back to 1725. Sitting at the intersection of Water St & George St, this impressive stone gastropub is the location where the ‘Great Fire of 1892’ was finally extinguished. The evening, for most, carried on to George St – the street with the most bars & pubs per square foot of any street in North America! 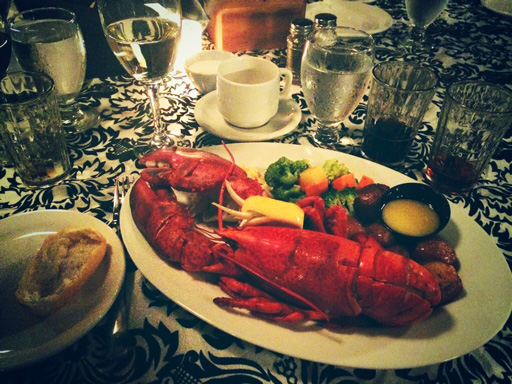 The CSUR course finished on Saturday after a great half-day review of urodynamics with Drs Greg Bailly and Jerzy Gajewski. Further affiliated meetings were held including the 2nd CUA Multidisciplinary Meeting for members of CAGMO, CUOG, GUROC and CNUP. An instructional course entitled Better Botox – from patient prep to injection protocols, was also offered to attendees. The major part of the CUA meeting (https://cuameeting.org/index.php/en/) began officially on Saturday afternoon with the first two Educational Forums – both on the topic of Castrate Resistant Prostate Cancer with tips and tools for the Canadian urologist to improve care of patients with CRPC. This included presentations from Drs Neil Fleshner, Ricardo Rendon, Alan So, Lorne Aaron, and Geoff Gotto. Here it was stressed that urologists should be comfortable as the primary physician giving medical treatment for CRPC. Saturday evening held the conference welcome reception – always a fantastic reunion – and unmoderated poster session.

Sunday morning started with a Welcome Address from CUA President Dr Peter Anderson, followed by the first State-of-the-Art Lecture on the role of medical management of nephrolithiasis in the age of lithotripsy with a focus on AUA Guidelines – an excellent overview presented by Dr Glenn Preminger of Durham, NC. A similarly themed Educational Forum covering medical management of stones in a case-based approach followed this; faculty included Dr Preminger as well as Drs Sero Andonian, John Dushinski and Jason Lee. The second State-of-the-Art Lecture saw Dr Surena Matin from Houston, TX present on neoadjuvant chemotherapy for UTUC, where he discussed benefits such as taking advantage of pre-op renal function and results showing both down-staging and a survival advantage. An Educational Forum followed on strategies for upper tract surveillance in urothelial carcinoma, management of post-op urinary diversion complications and contemporary use of biomarkers by Drs Matin, Adrian Fairey and Alan So. In the afternoon, Dr Eric Rovner from Charleston, SC gave a State-of-the-Art Lecture on SUI and slings. He presented an algorithm using the best available evidence on appropriate selection of sling type and reiterated that urodynamic studies are not necessary pre-operatively in the ideal index SUI patient. A forum entitled ‘Innovations in Functional Urology’ had Dr Catherine Dubeau from Worcester, MA joining Drs Sender Herschorn and Eric Rovner to discuss female SUI, post-prostatectomy incontinence and management of elderly patients with OAB. Dr William Gee from Lexington, KY then gave the address of the AUA President-elect, which was followed by the CUASF lecture by Dr Ron Kodama who discussed education & evaluation of residents. The late afternoon took a pediatric turn including a lecture by Dr Anthony Caldamone from Providence, RI on ‘Putting the Undescended Testicle in its Place!’ A point/counterpoint followed between Dr Caldamone and Dr Martin Koyle on the ideal surgical management for congenital duplication anomalies. The day wrapped up with podium sessions on pediatric urology, endourology and surgical education. 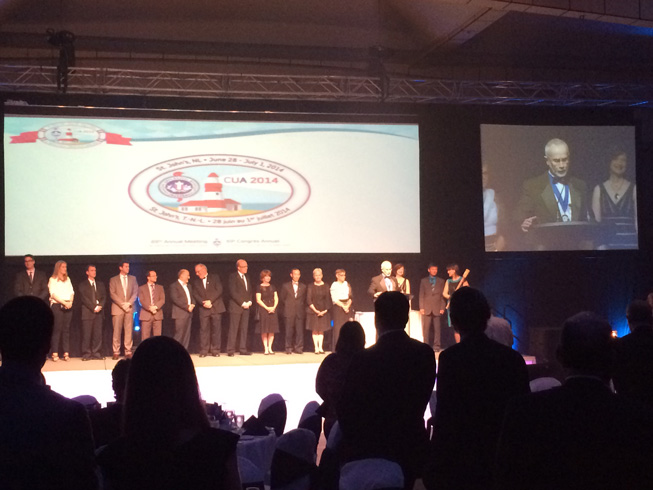 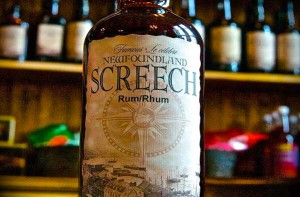 The annual CUA ‘fun night’ took place Sunday evening and was entitled Rally in the Alley. This was a very well-organized pub crawl that saw roughly 500 people split into 5 groups, each with a signature scarf colour and a different instrument to follow. For example, if you were in the blue bagpipe group, you put on your blue scarf and followed the bagpiper who would lead from pub to pub on George St (https://www.georgestreetlive.ca/). With one minute left before switching locations, you’d hear the bagpiper start up again – the signal to down your drink and move on! The five groups each did the pubs in a different order so that there was no overlap until everyone convened at the same final destination. In addition, each pub had a very ‘Newfie’ activity for everyone to try – including Irish Dancing, singing Newfie songs (‘we’ll rant and we’ll roar like true Newfoundlanders!’), and of course getting ‘Screeched in’ – a Newfoundland tradition involving reciting a poem, downing a shot of the cheap high alcohol spirit and kissing a freshly caught cod! It was an awesome night that truly gave all the ‘come from away’ folks a glimpse of life in Newfoundland (and perhaps a hangover to boot).

Monday was another full day, starting with moderated poster sessions on prostate cancer, pediatrics and sexual health and infertility. Next, Drs Paul Johnston and Stephen Steele gave a brief overview of clinical pearls that could change your practice. A State-of-the-Art Lecture by Dr Daniel Lin from Seattle, WA followed; he discussed selection of patients and outcomes in active surveillance. An Educational Forum came after this with Drs Laurence Klotz, Daniel Lin, and Chris Morash covering prostate biopsy and active surveillance.

The afternoon kicked off with the EAU Address from Dr Andrzej Borkowski of Warsaw, Polland, followed by a State-of-the-Art Lecture from Dr Mark Speakman of Somerset, UK on LUTS/BPH. Dr Speakman’s lecture was both highly entertaining and informative, and he stressed the importance of exercise and a healthy lifestyle in preventing LUTS progression. Drs Speakman, Gerald Brock, Sender Herschorn, and David Staskin of Boston, MA then gave an educational forum on prevention and management of LUTS/BPH. Dr Laurence Levine then discussed treatment of Peyronie’s Disease in the seventh State-of-the-Art Lecture, giving a useful summary on which type of surgery to choose depending on patient factors such as penile length and erectile function. An Educational Forum finished off the afternoon and covered the often-dreaded topic of Management of Scrotal Pain. Drs Keith Jarvi, Jay Lee, and Laurence Levine emphasized the importance of a multi-disciplinary approach in dealing with this type of chronic pain, and created a systematic approach that most urologists could utilize to avoid feeling helpless in dealing with this disorder. Dr Levine also showed promising results of micro-denervation of the spermatic cord for patients with refractory scrotal pain and good response to a cord block.

Monday evening held the annual President’s Reception. At the back of the room was a bar made entirely from carved ice – proving that Newfies really do love their icebergs. You can even drink beer made using 25,000-year-old iceberg water harvested from a Newfoundland ‘berg! These huge ice formations can be seen, along with whales, from the very picturesque, well-worth-the-climb, Signal Hill in St John’s. The reception also saw Dr Peter Anderson present Dr Jerzy Gajewski with the CUA Lifetime Achievement Award; clearly a surprise to Dr Gajewski but a well-deserved honour. Dr Anderson then handed over the reigns as CUA president to Dr Stuart Oake, who gave a sneak preview of what to expect in Ottawa for the annual meeting in June of 2015.

The final day of the conference started with a smorgasbord of topics in six different moderated poster sessions. Drs Bobby Shayegan and Keith Rourke covered ‘clinical pearls that could change your practice’ – a collection of useful tidbits collected during the various lectures and forums throughout the 4-day conference. Dr Derek Puddester gave a State-of-the-Art Lecture on physician health & wellness, reminding us all to practice mindfulness often. The final State-of-the-Art Lecture was by Dr Axel Heidenreich from Aachen, Germany, who covered the role of radial prostatectomy in the management of locally advance and metastatic prostate cancer. The last educational forum was on optimizing patient outcomes in kidney cancer – a session given by Drs Heidenreich, Rodney Breau, Steven Pauler and Simon Tanguay.

As the conference came to a close, staff and residents from across the country sat in the St John’s airport and reminisced about the week’s events. It was not only a great educational opportunity that many took advantage of; it was also a relaxing reunion for the relatively small group of urologists that are spread out across this vast country. Kudos to Dr Anderson and the Local Organizing Committee lead by Chair Dr Chris French, for putting on a meeting to remember. Newfoundland is certainly a beautiful and unique corner of our great country, and anyone would be wise to pay ‘the Rock’ a visit (https://www.newfoundlandlabrador.com/). Finally, if there is anywhere better to spend Canada Day than the charming easterly city of St John’s Newfoundland, it’s Ottawa, Ontario. So mark your calendars, as everyone is invited to the CUA meeting in Ottawa, June 27-30 2015! See you there!

Ellen Forbes is a Urology Resident at the University of Alberta. Twitter: @DrElForbes