You are here: Home1 / fascia width 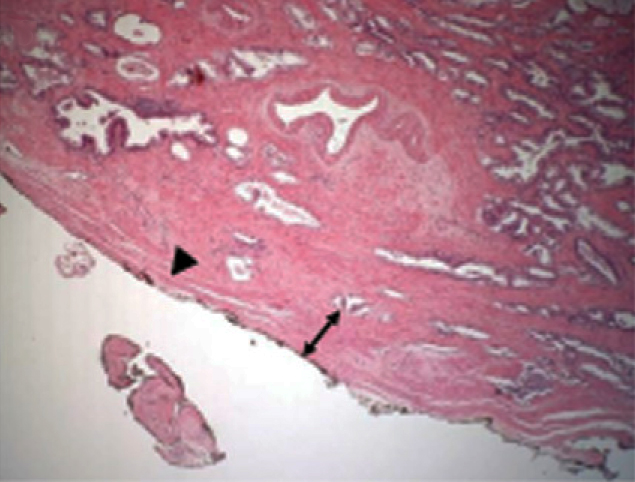 • To aid the novice robotic surgeon to develop the skills of RARP.

• Fascia width (FW) of each position in RP specimens were compared across nerve-sparing types (NSTs). FW was recorded at 15° intervals (3–9 o’clock position), measured as the distance between the outermost prostate gland and surgical margin.

• The slides were reviewed by an experienced uropathologist who was ‘blinded’ to the NST.

• FW was statistically signiﬁcantly correlated with the surgical technique used. When the surgeon intended to perform various levels of nerve sparing, these were reﬂected in the FW.

• Interestingly, the left-side FW showed more variability than the right side. We suspect that this was a result of the surgeon’s right-hand dominance.

• To further validate and conﬁrm these preliminary ﬁndings, additional studies involving multicentre cohorts would be required.

• The surgeon intended dissection and FW correlate, with ITR-NS providing the narrowest FW and the EF recovery rate was the highest in bilateral ITR-NS. There was more variability in FW outcome on the left side than the right.

• The novice robotic surgeon should consider this variability when performing RARP. It may have implications for technique improvement on nerve preservation for EF.

The authors have reported a pathological analysis showing that various levels of nerve-sparing technique were reﬂected in the radical prostatectomy (RP) specimen. Intriguingly, the authors found that the fascia width on the left side was much wider than the right side in the RP specimen with the interfascial nerve-sparing technique. This is important information for robotic surgeons. Looking at the literature, almost twice as many positive surgical margins have been reported on the left side in patients treated with laparoscopic RP and robot-assisted RP (RARP). Secin et al. also reported similar results, which revealed the tendency for left-side dominance of positive surgical margins. These results seem to be in large part due to the left side being more technically challenging, resulting in less precise dissection.

While the da Vinci Surgical System® has been shown to eliminate innate hand dominance, the observed ﬁndings were of novice robotic surgeons and meticulous dissection of the neurovascular bundle is usually performed using a dominant hand even in experienced robotic surgeons. Moreover, diﬀerences in robot instruments of both arms and assistant positioning may also play a role in diﬀerent outcomes by laterality. Nevertheless, the da Vinci Surgical System provides surgeons with magniﬁed three-dimensional vision equally on both sides and promotes meticulous lateral dissection. We think that the imprecision of surgery on the left side could be overcome if surgeons are aware of the potential diﬀerence in laterality. Finally, we congratulate Ko et al. for their novel work. A follow-up study with multiple surgeons and analysis that reﬂects the eﬀect of the surgeon’s learning curve on the outcomes would also be informative.